The University of Manitoba (U of M) is a public university in the province of Manitoba, Canada. Located in Winnipeg, it is a research-intensive post-secondary educational institution.[3] Founded in 1877, it was Western Canada’s first university.[3][4]

The University of Manitoba has three main locations: the Bannatyne Campus, the Fort Garry Campus and the William Norrie Centre.[5]

The downtown Bannatyne campus of the university comprises a complex of ten buildings located west of the Health Sciences Centre between McDermot Ave and William Ave in Central Winnipeg. This complex houses the medical and dental instructional units of the university. The Faculty of Dentistry, the Faculty of Medicine, the School of Medical Rehabilitation, and the School of Dental Hygiene are the major health sciences units located on this campus. The Faculty of Pharmacy officially joined the Bannatyne campus with the opening of the 95,000 sq ft (8,800 m2) Apotex Centre on October 16, 2008. The Brodie Center is known as the "flagship" which connects all three faculties as well as the Neil John MacLean Health Sciences Library and the Joe Doupe Fitness Centre. It is located on 727 McDermot Avenue.[5]

The main Fort Garry campus (located on the Red River in south Winnipeg) comprises over 60 teaching and research buildings of the University and sits on 274 hectares (680 acres) of land.[5] In addition, Smartpark is the location of seven buildings leased to research and development organizations involving university-industry partnerships. The address is 66 Chancellors Circle.

The William Norrie Centre on Selkirk Avenue is the campus for social work education for inner-city residents.

The university operates agricultural research stations near Glenlea and Carman, Manitoba.[5] The Ian N. Morrison Research Farm near Carman is a 406 acres (164 ha) facility located 70 km (43 mi) from Winnipeg, while the Glenlea facility is approximately 1,000 acres (405 ha) and located 20 km (12 mi) from Winnipeg. [6] 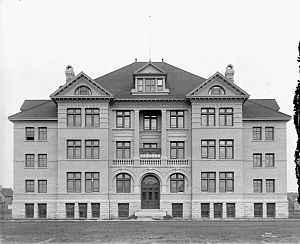 Historical photo of the university

The University of Manitoba is a non-denominational university, founded by Alexander Morris, that received a charter on February 28, 1877. It officially opened on June 20, 1877 [8] to confer degrees on students graduating from its three founding colleges: St. Boniface College (Roman Catholic/Francophone), St John's College (Anglican) and Manitoba College (Presbyterian). The University of Manitoba granted its first degrees in 1880.[9] The University was the first to be established in western Canada. Alan Beddoe designed the university coats of arms.[10]

The university has added a number of colleges to its corporate and associative body. In 1882 the Manitoba Medical College, which had been founded by some physicians and surgeons, became a part of the University. Charles Henry Wheeler (architect) designed the Bacteriological Research Building (1897), part of the Manitoba Medical College.[11] George Creeford Browne (architect) designed the Science Building, 1899-1900.[12]

In 1901 the Legislative Assembly of Manitoba changed the University Act so that the university could do its own teaching, and in 1905 a building in downtown Winnipeg became its first teaching facility with a staff of six science professors. The governance was modelled on the provincial University of Toronto Act of 1906 which established a bicameral system of university government consisting of a senate (faculty), responsible for academic policy, and a board of governors (citizens) exercising exclusive control over financial policy and having formal authority in all other matters. The president, appointed by the board, was to provide a link between the two bodies and to perform institutional leadership.[13]

In the early part of the 20th century, professional education expanded beyond the traditional fields of theology, law and medicine. Graduate training based on the German-inspired American model of specialized course work and the completion of a research thesis was introduced.[13]

The Manitoba Medical Alumni Association erected the Medical Corps Memorial, which is dedicated to the memory of the graduates and students of the University of Manitoba Medical College, who laid down their lives during the North West Rebellion (1 name); 1900 South African War (1 name) and 1914 - 1918 The Great War (7 names).[14]

The first school of architecture in western Canada was founded in 1919 at the University of Manitoba.[15]

The Faculty of Law was an affiliated college, the Manitoba Law School, which was founded jointly by the university and the Law Society of Manitoba in 1914. In 1920 it had 123 students, including 5 women, and 21 academic staff.[16] It became a full part of the university in 1966.[17]

The university was originally located on Broadway. In 1929, following the addition of more programs, schools, and faculties, the university moved to its permanent site in Fort Garry, Manitoba. The university maintained the Broadway facilities for many years.[9]

The university established an Evening institute in 1936.

The policy of university education initiated in the 1960s responded to population pressure.[13] In 1967, two of the colleges that had been part of the University of Manitoba were given university status by the provincial government. United College, which had been formed by the merging of Wesley College and Manitoba College, became the University of Winnipeg, and Brandon College became Brandon University.

St. Boniface College and St. John's College, two of the founding colleges of the University, are still part of the University of Manitoba. St. Boniface College is the University's only French language college; it offers instruction in French and facilities for the training of teachers who expect to teach in the French language. St. John's College, which dates back to 1820, offers instruction in Arts and Science and, among other special programs, prepares men and women for the ordained ministry of the Anglican Church. 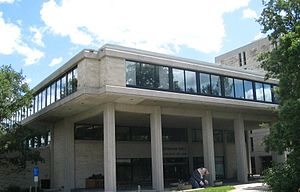 Thirty-three of the buildings on the Fort Garry campus of the University of Manitoba are used for teaching. Four of these are colleges: St. John's College, St. Paul's College, St. Andrew's College, and University College. The remaining buildings contain laboratories, administrative and service offices, residences, or are the property of research agencies.

In 2007-08, the university acquired more than $150 million in research income. The university holds 48 Canada Research Chairs and is either home to or a partner in 37 research centres, institutes and shared facilities. These centres foster collaborative research and scholarship.

The University of Manitoba is the network leader of ISIS Canada (Intelligent Sensing for Innovative Structures), headquartered in the Faculty of Engineering. ISIS Canada is a National Network of Centres of Excellence (NCE) developing better ways to build, repair and monitor civil structures. The university is a member of 13 other NCEs.

The Centre for Defence and Security Studies at the University of Manitoba has a research, teaching and outreach program designed to advance knowledge, understanding and debate in Canada on defence and security issues.[18] 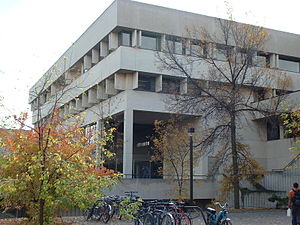 On 28 February 2002, Canada Post issued 'University of Manitoba, 1877-2002' as part of the Canadian Universities series. The stamp was based on a design by Steven Slipp, based on photographs by Mike Grandmaison and on an illustration by Bonnie Ross. The 48¢ stamps are perforated 13.5 and were printed by Ashton-Potter Canada Limited.[19]

In 2013, the University of Manitoba sponsored an urban planning design competition[20] to plan an extension to the Fort Garry Campus. The goal is to improve the general campus experience and guide future growth by establishing an urban framework for housing, university buildings and the associated public transportation in the area. The winning design submission[21] was from Janet Rosenberg & Studio Inc. (Toronto) and Cibinel Architects Ltd. (Winnipeg) with Landmark Planning & Design Inc. (Winnipeg) and ARUP Canada Inc. (Toronto).

The university has a total enrolment of approximately 26,000 students in 22 faculties. Most academic units offer graduate studies programs leading to master’s or doctoral degrees. In 2014, the University of Manitoba overtook the University of Sherbrooke to be rated second last overall in the Macleans Rankings of Canadian Medical Doctoral Schools.

The university has 19 libraries and one archive:

Notable past and present instructors

As of 2010, there have been 96 Rhodes Scholars from the University of Manitoba, more than from any other university in Western Canada.[38][39]

The university is represented in Canadian Interuniversity Sport by the Manitoba Bisons.[citation needed]

The main art gallery on campus is "School of Art Gallery".[40]

The students at the university are members of the University of Manitoba Students' Union (UMSU). UMSU represents students at the Board of Governors and Senate, as well as providing programs and support to students.

Histories of the University