The University of Massachusetts is the five-campus public university system of the Commonwealth of Massachusetts. The system includes four universities, a medical school and a satellite campus.[4][5] The system is accredited by the New England Association of Schools and Colleges and across its campuses enrolls 73,000 students.[6]

The UMass system is ranked 57th in the World in 2015 for its Innovative Achievements according to Reuters[7] and was ranked 91-100 in the world by reputation in 2015 by Times Higher Education World University Rankings.[8]

In 2012, the state of Massachusetts introduced $607 million in new bond funding to advance high-quality instructional and research facility projects throughout the UMass system.[9][10] In 2012, research expenditures for the UMass system were close to $600 million.[11] 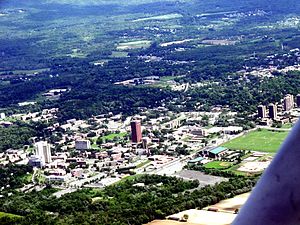 UMass Amherst is the flagship and the largest of the UMass campuses, as well as the first established. Like many colleges and universities, Massachusetts Agricultural College (as it was originally called) the Amherst campus was founded as a land-grant college in 1863, receiving initial start-up funding as part of the Morrill Land-Grant Colleges Act. It became Massachusetts State College in 1931, and University of Massachusetts in 1947. The library system is the largest state-supported library system in New England with over 6.1 million items. The campus has many architecturally distinctive buildings commissioned by the Commonwealth and designed by world-renowned architects.

UMass Amherst offers a variety of academic and co-curricular options. Ninety-three percent of the 1,174 full-time faculty members hold the highest degree in their fields. The average SAT score (reading and math only) for the 2015 entering class is 1226, and the average GPA is 3.83 on a 4.0 scale. The campus has 21,373 undergraduates and offers 86 bachelor's degree programs. There is a student-to-faculty ratio of 17:1. UMass Amherst hosts Commonwealth Honors College (CHC) where admission is more competitive with an average SAT score of 1390. CHC offers personalized advising, smaller class sizes taught by professors, and a six building Honors Residential Community, which opened in Fall 2013.[12]

Students participate in 240 campus organizations, 21 NCAA Division I athletic teams, living-learning residence halls, community service, internships, and faculty research. UMass Amherst is also part of the Five Colleges consortium, with Smith, Mount Holyoke, Hampshire, and Amherst colleges, all within a free bus ride of each other using the Pioneer Valley Transit Authority. Students can take classes on any of these campuses and participate in all co-curricular and cultural activities.[12] Kumble R. Subbaswamy serves as UMass Amherst's chancellor.[13] 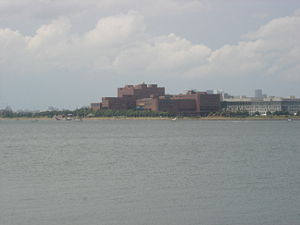 UMass Boston is a research university[14] located in the City of Boston. Located on the Columbia Point peninsula, the University is surrounded by the Boston Harbor, the John F. Kennedy Library and the Massachusetts State Archives. The Boston Globe is also headquartered adjacent to campus, as well as Boston College High School. Subsequently, the university holds many partnerships with its neighboring organizations, providing research and employment opportunities. 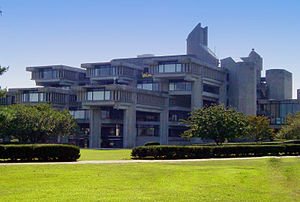 In addition to the 710-acre (2.9 km2) UMass Dartmouth main campus is, satellite campuses are located throughout the SouthCoast.[18]

With 7,982 undergraduate students and 65 degree programs, the campus has a student-to-faculty ratio of 18:1 in its College of Arts & Sciences; Charlton College of Business; College of Engineering; College of Nursing; College of Visual and Performing Arts; School of Education, Public Policy, and Civic Engagement; and the School for Marine Science and Technology. The University hosts internships, undergraduate research opportunities, and service learning experiences, as well as an Honors Program.[18]

More than 100 student organizations and 25 NCAA Division III athletic teams provide a strong community beyond the classroom. UMass Dartmouth is among the fastest growing campuses in New England.[18] The campus is home to the only complete building system designed by renowned brutalist architect Paul Rudolph. Divina Grossman is the Chancellor of the UMass Dartmouth campus.[19][20]

University of Massachusetts School of Law was opened in September 2010 at the Dartmouth campus. 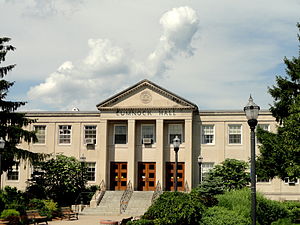 UMass Lowell is a comprehensive University with a national reputation in science, engineering, Management and technology, and committed to educating students for lifelong success in a diverse world and conducting research and outreach activities that sustain the economic, environmental and social health of the region.

UMass Lowell is located in the Merrimack Valley, close to Boston, ocean beaches, and the mountains of New Hampshire. With a national reputation for education and research in science, engineering, and technology, the campus offers a number of undergraduate and graduate programs. Academic programs include internships, co-ops, service learning, and international education.[21]

UMass Lowell has a total of 17,184[22] students as of fall 2014 and is the fastest growing of the five UMass campuses.[23] The campus offers over 120 fully accredited programs taught by 737 faculty members in five colleges. Most of the 75 bachelor's degree programs offer five-year Bachelor's to Master's programs. The student-to-faculty ratio is 14:1 and half of the undergraduate classes have fewer than 20 students. Ninety-three percent of the full-time faculty members hold the highest degree in their fields.[21]

There are 12 University residence halls located on the campus. There are more than 120 active student organizations on campus, a campus recreation center, 16 NCAA Division I sports teams that compete in the America East Conference, and the ice hockey team that competes in the Hockey East Conference. 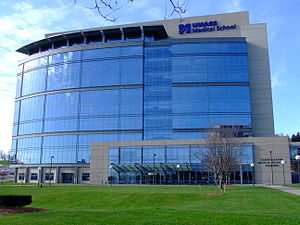 The University of Massachusetts Worcester, also known as UMass Medical School, is one of the fastest growing academic health science centers in the country and is home to the School of Medicine (SOM) — the Commonwealth's only public medical school — the Graduate School of Biomedical Sciences (GSBS), the Graduate School of Nursing (GSN), and a research enterprise that attracts more than $200 million in external funding annually.[24]

The work of UMass Medical researcher and 2006 Nobel Prize winner Craig Mello, Ph.D., an investigator of the prestigious Howard Hughes Medical Institute, toward the discovery of RNA interference has launched a promising new field of research. The school is also the future home of the Albert Sherman Center, an interdisciplinary, research and education facility that will foster collaboration among scientists and innovation across disciplines.[24] Michael F. Collins, MD, FACP is the chancellor of the UMass Medical School campus.[25]

In 2014, the state of Massachusetts gave $5.2 million[26] to the Springfield satellite center to allow the university to complete construction and buy furnishings. .[27][28] The satellite center, administered by the Amherst campus, opened in March 2014, registering students for September 2014.[29] Programs include nursing, education, business administration, addiction counseling, and GED classes.[30]

The Massachusetts Green High Performance Computing Center is a joint venture of the University of Massachusetts system, MIT, Harvard, Boston University, and Northeastern to build a shared high-performance computing facility.[31] In 2010, UMass Boston partnered with Dana–Farber/Harvard Cancer Center to collaborate on research aimed at addressing issues of cancer health disparities in disenfranchised populations under U54 Cancer Partnership.[32]

University of Massachusetts Intercampus Graduate School of Marine Sciences and Technology[33] is a graduate degree program offering Master of Science, Doctor of Philosophy and Professional Science Master's Degree.[34] The graduates receive a joint degree from all four of the main UMass campuses.[33]

The FY 2014 Operating Budget for the UMass system is $2.94 billion representing a 2.6% increase over the current year expenses.[35] Several university of Massachusetts employees are among the highest paid state employees in Massachusetts.[36][37][38]

The President is the University's chief executive officer and works to advance its mission of education, research and public service. Marty Meehan became the 27th president of the five-campus, 73,000-student University of Massachusetts system on July 1, 2015.

Below is a list of Presidents of the University of Massachusetts. Before the 1962 establishment of the Medical School, the president was the administrator of the system's only campus in Amherst. Today, the President administers 5 campuses.

The University of Massachusetts is governed by a lay Board of Trustees. The Board of Trustees functions as a legislative body dealing mainly with questions of policy. The Board is not an administrative or management board. In certain rare instances when required by the Massachusetts General Laws, it may function as an appeal body. The Board establishes the general policies governing the University, but has delegated many powers to the President and, through the President, to campus administrators for day-to-day-operations.

Composition of the Board