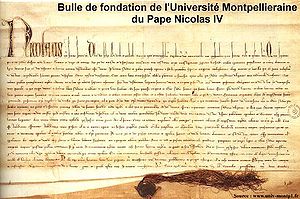 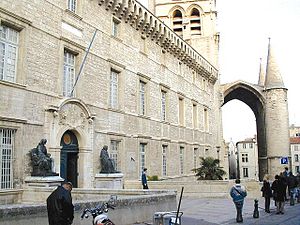 The university is considerably older than its formal founding date, associated with a papal bill issued by Pope Nicholas IV in 1289, combining all the centuries-old schools into a university.,[3] but the first statutes were given by Conrad of Urach in 1220.

It is not known exactly when the schools of liberal arts were founded that developed into the Montpellier faculty of arts; it may be that they were a direct continuation of the Gallo-Roman schools that gathered around masters of rhetoric. The school of law was founded by Placentinus, from the school of law at Bologna, who came to Montpellier in 1160, taught there during two different periods, and died there in 1192. The faculty of law has had a long career. Professors from Montpellier were prominent in the drafting of the Napoleonic Code, the civil code by which France is still guided and a foundation for modern law codes wherever Napoleonic influence extended. The faculty of law was reorganized in 1998.

The prestigious school of medicine was founded perhaps by people trained in the Muslim Spanish medical schools as Muslim rule from the Spain did not end until 1492; it is certain that, as early as 1137, there were excellent physicians at Montpellier University. It is the world's oldest medical school still in operation, however, the University of Azhar, Egypt used to award medical degrees as early as 700 AD. The school of medicine owed its success to a policy of the Guilhem lords of Montpellier, by which any licensed physician might lecture there: with no fixed limit to the number of teachers, lectures multiplied, thus providing a great choice of teachers coming from all around the Mediterranean region (Guilhem VIII act of January 1181).[4] The statutes given in 1220 by Cardinal Conrad von Urach, legate of Pope Honorius III, which were confirmed and extended in 1240, placed this school under the direction of the Bishop of Maguelonne, but the school enjoyed a great deal of de facto autonomy.

The school was famous for arguing in the fourteenth century that the Black Death was caused by a miasma entering the opening of the body's pores, citing theories developed by Galen. Doctors educated at Montpellier advocated against bathing because they claimed bathing opened the body's pores, making one more susceptible to the bubonic plague.[5]

In 1529, after some years as an apothecary, Nostradamus entered the University of Montpellier to study for a doctorate in medicine. He was expelled shortly afterwards when it was discovered that he had been an apothecary, a "manual trade" expressly banned by the university statutes. The expulsion document (BIU Montpellier, Register S 2 folio 87) still exists in the faculty library. Rabelais took his medical degree at Montpellier, and his portrait hangs among the gallery of professors.

The Jardin des plantes de Montpellier, founded in 1593, is the oldest botanical garden in France. It was in this school that the biological theory of vitalism, elaborated by Barthez (1734–1806), had its origin. The French Revolution did not interrupt the existence of the faculty of medicine. The Benedictine monastery that had been converted into the bishop's palace, was given to house the medical school in 1795. A gallery devoted to the portraits of professors since 1239 contains one of Rabelais.

The school of theology had its origins in lectures in the convents: St. Anthony of Padua, Raymundus Lullus, and the Dominican Bernard of Trilia all lectured. Two letters of King John II prove that a faculty of theology existed at Montpellier independently of the convents, in January 1350. By a Bull of 17 December 1421, Pope Martin V granted canonical institution to this faculty and united it closely with the faculty of law.

In the 16th century the local triumph of Calvinism interrupted the somewhat somnolent Catholic school of theology, which was reinstated in 1622; but the rivalries of Dominicans and Jesuits interfered seriously with the prosperity of the faculty, which disappeared at the Revolution. In better days, among Montpellier's illustrious pupils of law were Petrarch, who spent four years at Montpellier, and among its lecturers were William of Nogaret, chancellor to Philip IV, Guillaume de Grimoard, afterwards Pope Urban V, and Pedro de Luna, afterwards antipope Benedict XIII.

University of Montpellier secured 55th and 16th places in the world and Europe, respectively, in Reuters - The World's Most Innovative Universities 2018. It is also ranked among the top 200 universities in the Academic Ranking of World Universities 2019.[7][8]

University of Montpellier undergraduate law program is ranked 6th of France by Eduniversal, with 3 stars (2016/17).[9]

University of Montpellier was ranked 1st in the world in Ecology in the subject rankings of Academic Ranking of World Universities 2018.