The University of Navarra is a private university located on the southeast border of Pamplona, Spain. It was founded in 1952 by St. Josemaría Escrivá de Balaguer, the founder of Opus Dei, as a corporate work of the apostolate of Opus Dei.

Since 2011, the New York Times has ranked the University of Navarra within the top 60 universities in the world, placing it at number 34 in 2012.[3] 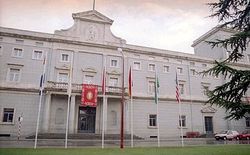 Central building of the University of Navarra

The institution was founded as the Estudio General de Navarra on October 17, 1952 with the encouragement of Josemaría Escrivá. It began as a School of Law with 48 students and eight professors, under the direction of Ismael Sánchez Bella. The founder described the ideals he wanted to transmit in the university:

"We want learned men to be formed here, with a Christian understanding of life; we want this environment, suitable for quiet reflection, to cultivate science rooted in its most solid principles, so that this light might shine over all the roads of knowledge"

After the foundation of the Faculty of Philosophy in 1955 and the Business School, IESE, in 1958, the Estudio General de Navarra was established as a university by The Holy See on August 6, 1960, and Escrivá was designated as the Great Chancellor. The university received an official accreditation from the Spanish State, on 8, September 1962.[citation needed]

Most of the facilities and centers are located in Pamplona, with the exception of IESE Business School, which is based in Barcelona, Madrid, Munich and New York; and the School of Engineering, Tecnun, which is located in Donostia-San Sebastián.

In January 2015, the Museum of the University of Navarra was inaugurated by King Felipe VI and houses a collection donated to the university by María Josefa Huarte Beaumont. This collection, regarded as one of the greatest collections of contemporary art in Spain, includes works by Pablo Picasso and Wassily Kandinsky, among other artists.[citation needed] The architect in charge of the project was Rafael Moneo. The museum also aims to increase interaction between the faculties, centers, departments and schools of the university, and to be a point of reference in the world of contemporary art.

The university faculties and schools have thousands of researchers in different areas. The 8 centers and 17 institutes, located in the five campuses, carry out their research in the fields of Science and the Humanities, as well as the University Clinic of Navarra, the Center for Applied Medical Research and the Institute of Society and Culture.[1][2]