From Infogalactic: the planetary knowledge core
Jump to: navigation, search
Not to be confused with New Orleans University. 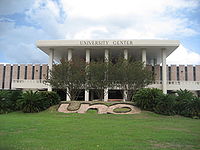 In the fall of 2011 the Southern Association of Colleges and Schools Commission on Colleges gave approval for the University of New Orleans to join the University of Louisiana System, concluding the five-month transition from the LSU System since Act 419 of the 2011 Louisiana Legislative Regular Session was signed into law in July 2011. Soon after the transition was approved, the UNO Presidential Search Committee selected UNO alumnus Peter J. Fos (Class of 1972) as president.

State Senator Theodore M. Hickey of New Orleans in 1956 authored the act which established the University of New Orleans. At the time New Orleans was the largest metropolitan area in the United States without a public university though it had several private universities, such as Tulane, Loyola, and Dillard. The institution was originally named Louisiana State University in New Orleans or LSUNO but renamed in 1973. The UNO University Ballroom was named in Hickey's honor late in 2014, more than two decades after his death.[5]

The university was built on the New Orleans Lakefront when the United States Navy relocated Naval Air Station New Orleans. The Orleans Levee Board leased the closed base to the LSU Board of Supervisors. The renovation went quicker than expected. LSUNO opened for classes in 1958, two years ahead of schedule. It was originally reckoned as an offsite department of the main campus in Baton Rouge, and as such its chief administrative officer was originally called a dean (1958-1961), then a vice president in charge (1961-1963). In 1963, the LSU System of Higher Education was established and UNO became a separate campus in that system. To signify that it was now a co-equal institution with LSU, its chief executive's title was changed from "vice president in charge" to "chancellor." After a decade of growth, the LSU Board of Supervisors approved a name change to the current University of New Orleans. Nearly fifty years later, in 2011, the University of New Orleans officially became part of the University of Louisiana system, and its chief executive's title was changed to "president."[6]

On August 29, 2005, the University suffered damage due to Hurricane Katrina. The main campus is on relatively high ground and the damage was caused mostly by winds, rain-driven-water, and human activity during the storm. (The University was used as an evacuation point and staging area by the National Guard.) A levee breach on the London Avenue Canal occurred just a few blocks south of the main campus and caused the flooding of the first floor of the Bienville Hall dormitories, the Lafitte Village couples apartments, and the Engineering Building.

UNO was the first of the large, damaged universities in New Orleans to re-open, albeit virtually, by using web-based courses starting in October 2005.[7] The university was able to offer classes in the fall semester immediately following Hurricane Katrina at satellite campuses; the main campus re-opened in December 2005.

Hurricane Katrina reduced enrollments at all colleges in New Orleans, but the University of New Orleans was particularly hard hit. This echoed the damage to New Orleans as a whole, since UNO serves as a leader in educating students from New Orleans. Since the hurricane, the student enrollment is on a steady increase toward pre-Katrina numbers. In 2011, State Senator Conrad Appel of Jefferson Parish, with the support of Governor Bobby Jindal, tried to combine UNO with the historically black Southern University at New Orleans as a way to save higher education dollars. His plan was withdrawn in both houses of the legislature because of a lack of support from his colleagues.

There are more than 120 registered clubs and organizations active at UNO, including 15 fraternities and sororities.[8] UNO Student Government, is the official student government association. Registered organizations are separated into categories of either religious, honorary, political, professional, social, service, organizations, or special interests.

Driftwood is the UNO weekly newspaper and is published every Thursday.[9] UNO also owns and operates WWNO, a local radio station.[10] WWNO began transmitting in 1972.[10]

The Greek community at The University of New Orleans is composed of 16 organizations, governed by three councils.[11]

UNO has five colleges: College of Business Administration, College of Education and Human Development, College of Engineering, College of Liberal Arts, and College of Sciences. The university also offers a bachelor's degree in Interdisciplinary Studies.

The university has three campuses in the New Orleans metropolitan area.

Lafitte the InstiGator, the university's official mascot, at a campus parade.

The University of New Orleans currently has 14 varsity sports teams, and is a Division I member of the NCAA (National Collegiate Athletic Association). UNO originally attempted to reclassify to Division II's Gulf South Conference.[19] On February 1, 2011, Provost Joe King submitted the Division II proposal to the LSU Board of Supervisors.[20] Previously, UNO competed at the Division II level from 1969-1975.[21] On March 9, 2012, New University President Peter J. Fos announced that UNO plans to remain a member of NCAA Division I, with potential homes being the Sun Belt or Southland Conference.[22] On August 21, 2012, UNO announced that it would be joining the Southland Conference, effective the 2013-2014 academic year.[23]

The official fight song of The University of New Orleans is "Let's hear it for UNO."[24] The song was adopted after a competition in 1981. The winner was Lois Ostrolenk.[24] Before this, the melody from William Tell Overture was used. A variation of the overture is still played to honor this tradition.[24]

The University of New Orleans has many club sports provided by the Department of Recreation and Intramural Sports. Club sports are available to all UNO students who have an interest. Active club sports as of Fall 2013: 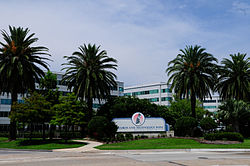 The University of New Orleans Research and Technology Park.

The University of New Orleans Research and Technology Park is a research park whose tenants collaborate with the University to conduct research, provide training, and create education opportunities.[25] Tenants have many university services provided to them, such as child services, the university library and recreational facilities.[26]