Eberhard Karls University, Tübingen (German: Eberhard Karls Universität Tübingen, sometimes called the "Eberhardina Carolina") is a public research university located in the city of Tübingen, Baden-Württemberg. It is one of Germany's most famous and oldest universities, noted in medicine, natural sciences, and the humanities. In the area of German Studies (German: Germanistik) it has been ranked first among all German universities for many years, and is known as a centre for the study of theology and religion. Tübingen is one of five classical "university towns" in Germany; the other four being Marburg, Göttingen, Freiburg and Heidelberg.[citation needed] The university is associated with some Nobel laureates, especially in the fields of medicine and chemistry.

The University of Tübingen was founded in 1477 by Count Eberhard V (Eberhard im Bart, 1445–1496), later the first Duke of Württemberg, a civic and ecclesiastic reformer who established the school after becoming absorbed in the Renaissance revival of learning during his travels to Italy. Its first rector was Johannes Nauclerus.

Its present name was conferred on it in 1769 by Duke Karl Eugen who appended his first name to that of the founder (Karls being the possessive form of Karl). The university later became the principal university of the kingdom of Württemberg. Today, it is one of nine state universities funded by the German federal state of Baden-Württemberg.

The University of Tübingen has a history of innovative thought, particularly in theology, in which the university and the Tübinger Stift are famous to this day. Philipp Melanchthon (1497–1560), the prime mover in building the German school system and a chief figure in the Protestant Reformation, helped establish its direction. Among Tübingen's eminent students (and/or professors) have been the astronomer Johannes Kepler; the economist Horst Köhler (President of Germany); Joseph Ratzinger (Pope Benedict XVI), poet Friedrich Hölderlin, and the philosophers Friedrich Schelling and Georg Wilhelm Friedrich Hegel. "The Tübingen Three" refers to Hölderlin, Hegel and Schelling, who were roommates at the Tübinger Stift. Theologian Helmut Thielicke revived postwar Tübingen when he took over a professorship at the reopened theological faculty in 1947, being made administrative head of the university and President of the Chancellor's Conference in 1951.

The university rose to the height of its prominence in the middle of the 19th century with the teachings of poet and civic leader Ludwig Uhland and the Protestant theologian Ferdinand Christian Baur, whose circle, colleagues and students became known as the "Tübingen School," which pioneered the historical-critical analysis of biblical and early Christian texts, an approach generally referred to as "higher criticism." The University of Tübingen also was the first German university to establish a faculty of natural sciences, in 1863. DNA was discovered in 1868 at the University of Tübingen by Friedrich Miescher. Christiane Nüsslein-Volhard, the first female Nobel Prize winner in medicine in Germany, also works at Tübingen. The faculty for economics and business was founded in 1817 as the "Staatswissenschaftliche Fakultät" and was the first of its kind in Germany.

Hans Bethe lost his job in 1933, because his mother was Jewish, and emigrated.

In 1966, Joseph Ratzinger, who would later become Pope Benedict XVI, was appointed to a chair in dogmatic theology at Tübingen, where he was a colleague of Hans Küng.

In 1970 the university was restructured into a series of faculties as independent departments of study and research after the manner of French universities.

After the death of Tübingen's influential Marxist philosopher Ernst Bloch, who has served as a role model for many German students, Tübingen was unofficially renamed as "Ernst-Bloch-University". Until today the unofficial university logo shows a clenched fist - a popular gesture of student protest since Bloch.[2]

The university made the headlines in November 2009 when a group of left-leaning students occupied one of the main lecture halls, the Kupferbau, for several days. The students' goal was to protest tuition fees and maintain that education should be free for everyone.

The University of Tübingen undertakes a broad range of research projects in various fields. Among the more prominent ones in the natural sciences are the Hertie Institute for Clinical Brain Research, which focuses on general, cognitive and cellular neurology as well as neurodegeneration, and the Centre for Interdisciplinary Clinical Research, which deals primarily with cell biology in diagnostics and therapy of organ system diseases. In the liberal arts, the University of Tübingen is noteworthy for having the only faculty of rhetoric in Germany – the department was founded by Walter Jens, an important intellectual and literary critic. The university also boasts continued pre-eminence in its centuries-old traditions of research in the fields of philosophy, theology and philology. Since at least the nineteenth century, Tübingen has been the home of world-class research in prehistoric studies and the study of antiquity, including the study of the ancient Near East; a particular focus of the research in these areas at the University of Tübingen has been Anatolia, e.g., through the continued excavations of the university at Troy.

The University of Tübingen is not a campus university, but is spread throughout the town: Tübingen is one of five classical "university towns" in Germany. The other four are Marburg, Göttingen, Freiburg and Heidelberg.[citation needed] In Tübingen there are four areas with a major concentration of university institutions.

Accommodation provided by the Tübingen Studentenwerk is in several locations throughout the town. The largest of the eleven halls of residence are at Waldhäuser Ost (1,700 rooms) and in the Französisches Viertel (500 rooms).[5]

The main lending library is located on Wilhelmstraße and consists of several different parts which are connected through corridors and walkways:

The university is made up of 14 faculties, some of which are subdivided into further departments.[6]

The university is governed by three separate bodies sharing different functions and duties. However, some persons serve in more than one body.

The Rectorate is the executive component of the university's governing body. The current rector, Professor Bernd Engler, is supported by four deputies consisting of three prorectors and one provost. All are also permanent members of the university senate.[7][8]

The Senate forms the legislative section of governance. Apart from the members of the rectorate, it includes the equal opportunities commissioner, the deans and 20 elected members representing the professors, lecturers, students and non-academic staff. Two advisors represent the university's teaching hospitals.[9]

The University Council (Hochschulrat or Universitätsrat) has 13 members, including its president and vice-president as well as five further internal and six external members.[10]

The University of Tübingen is associated with several Nobel laureates, especially in the fields of medicine and chemistry. In 2012 the University of Tübingen was awarded for its future concept "Research – Relevance – Responsibility" in the course of the German Universities Excellence Initiative.[11] The award brings huge additional research funds for five years.[12] The university may also call itself German "Eliteuniversität" (Elite University) now.

According to The Times Higher Education Supplement (2016) Tübingen is one of the 78 best universities in the world[13] and one of the 48 world-beating universities in Arts and Humanities.[14] As a consequence of this, The Economist understands Tübingen as "home to a famous university".[15] Since some of the most influential Protestant and Catholic theologians of the 20th century have been trained there, the University of Tübingen is especially renowned in the fields of Theology and Philosophy of Religion. The Eberhard Karls University is the only university in the German-speaking world that teaches rhetoric as an independent subject of study.[16] Moreover, in the area of German Studies (German: Germanistik) Tübingen has been ranked first among all German universities for many years.

As the university's students make up roughly a third of the total population of Tübingen, the town's culture is to a large extent dominated by them. Consequently, there is a slump of activity during university holidays, particularly over the summer, when a large number of otherwise regular events do not take place.

Around 30 Studentenverbindungen, the German type of fraternities, are associated with the university. While famous for their parties, public academic lectures and the yearly "Stocherkahn-Rennen" punting-boat race on the Neckar river, some of them are the subject of ongoing controversy surrounding alleged rightwing policial views, leading to strong criticism from leftist groups.[20] The university itself takes a neutral stance on this issue.

Also closely linked to the university are a number of student societies representing mainly the arts and political parties. Most notable are a number of choirs as well as student theatre groups affiliated with the faculty of Modern Languages, some of which perform in foreign languages. Radio Uniwelle Tübingen is the university's radio station, airing seven hours of programmes a week produced by students under the supervision of staff employed by the university.[21]

The university also offers gym and sports classes called Hochschulsport.[22] Since Tübingen has a department of sports science with a broad range of facilities, students of other subjects have the possibility to participate in various kinds of sports courses in teams or as individuals. Furthermore, even exotic sports, such as parachuting or martial arts, are offered. Students may attend courses either for free or at reduced rates. The sports department is located close to the Wilhelmstraße area of university buildings and is served by a number of frequent bus routes.

Unlike in some major cities, student discounts are not widely available in Tübingen. Cinemas and the town council's public library in particular do not offer discounts for students, and there are only a handful of restaurants which have reduced lunch deals. However, students may benefit from the Semesterticket, a heavily discounted public transport season pass offering six months of unlimited travel on trains and buses in the naldo Verkehrsverbund transport association for approximately €62.50.[23] The Landestheater Tübingen theatre and all public swimming pools also have discounts for students.

Nightlife in Tübingen is centered on the numerous pubs in the old town along with a number of clubs, most of which dedicate themselves to non-mainstream music. During the semester, the Studentenwerk-owned Clubhaus at the centre of the Wilhelmstraße university area hosts the weekly Clubhausfest on Thursday nights. This popular, free-entry club night is organized and promoted by student societies and Fachschaft student representative bodies and all proceeds go towards their activities in support of students. 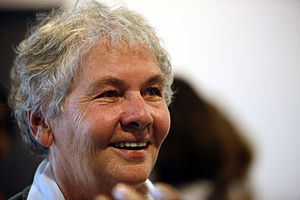 Faculty members and alumni who have been awarded with the Nobel Prize:

This list also includes alumni of the Tübinger Stift, which is not a part of the University, but has a close relationship with it.

Tübingen's elitist self-conception is often controversially discussed. Since almost all German universities are public (most private universities do not have the official German "Universitätsstatus"), and therefore mainly paid by taxes and generally egalitarian, there is no German Ivy League of institutions of higher education. Moreover, the German Universities Excellence Initiative is a publicity-laden fund for specific research projects only. It aims to promote cutting-edge research, to create outstanding conditions for young scientists at universities, and to strengthen some selected universities more than others in order to raise their international visibility.

This self-conception is also of historical interest: from 1900 to 1929 members of the Studentenverbindungen in Tübingen already understood themselves as the German national elite ("Führer der Nation").[26] Every May until 2008, duelling fraternities of the "Tübinger Waffenring" organized a big torchlight procession and sang traditional German and Germanic songs in the old town ("Maieinsingen"), accompanied by huge anti-nationalistic counter-demonstrations of left-wing student groups.[27]

In 1969, this progressive political and theological climate alienated Professor Joseph Ratzinger (who later became Pope Benedict XVI) and led to his short-lived tenure at the university. According to the Swabian daily newspaper, the Schwäbisches Tagblatt, Ratzinger was theologically "traumatized" at the University of Tübingen.[28] In Aus meinem Leben: Erinnerungen he describes the liberalism of Tübingen's student activism as "the cruel countenance of this atheistic devoutness" ("das grausame Antlitz dieser atheistischen Frömmigkeit").[29]