The upper class in modern societies is the social class composed of the wealthiest members of society, who also wield the greatest political power[citation needed]. According to this view, the upper class is generally distinguished by immense wealth which is passed on from generation to generation.[1][unreliable source?] Prior to the 20th century, the nomenclature aristocracy was widely used. Out of the American population, one percent of the wealthiest population is responsible for thirty-four percent of the cumulative national wealth.[2]

Because the upper classes of a society may no longer rule the society in which they are living, they are often referred to as the old upper classes and they are often culturally distinct from the newly rich middle classes that tend to dominate public life in modern social democracies. According to the latter view held by the traditional upper classes, no amount of individual wealth or fame would make a person from an undistinguished background into a member of the upper class as one must be born into a family of that class and raised in a particular manner so as to understand and share upper class values, traditions, and cultural norms. The term is often used in conjunction with terms like "upper-middle class," "middle class," and "working class" as part of a model of social stratification.

Historically in some cultures, members of an upper class often did not have to work for a living, as they were supported by earned or inherited investments (often real estate), although members of the upper class may have had less actual money than merchants. Upper-class status commonly derived from the social position of one's family and not from one's own achievements or wealth. Much of the population that composed the upper class consisted of aristocrats, ruling families, titled people, and religious hierarchs. These people were usually born into their status and historically there was not much movement across class boundaries. This is to say that it was much harder for an individual to move up in class simply because of the structure of society.[citation needed] 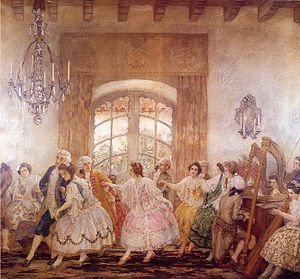 Ball in colonial Chile by Pedro Subercaseaux. In Spain's American colonies, the upper classes were made up of Europeans and American born Spaniards and were heavily influenced by European trends.

In many countries, the term "upper class" was intimately associated with hereditary land ownership. Political power was often in the hands of the landowners in many pre-industrial societies despite there being no legal barriers to land ownership for other social classes. Upper-class landowners in Europe were often also members of the titled nobility, though not necessarily: the prevalence of titles of nobility varied widely from country to country. Some upper classes were almost entirely untitled, for example, the Szlachta of the Polish-Lithuanian Commonwealth.[citation needed] 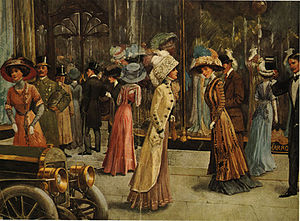 In England, Wales, Scotland, and Ireland, the "upper class" traditionally comprised the landed gentry and the aristocracy of noble families with hereditary titles. The vast majority of post-medieval aristocratic families originated in the merchant class and were ennobled between the 14th and 19th centuries while intermarrying with the old nobility and gentry.[3] Since the Second World War, the term has come to encompass rich and powerful members of the managerial and professional classes as well.[4] Members of the English gentry organized the colonization of Virginia and New England and ruled these colonies for generations forming the foundation of the American upper class or East Coast Elite.

In the United States, the upper class, as distinguished from the rich, is often considered to consist of those families that have for many generations enjoyed top social status based on their leadership in society and their distinctive culture derived from their Upper class ancestors in the colonial gentry[dubious – discuss]. In this respect, the US differs little from countries such as the UK where membership of the 'upper class' is also dependent on other factors. In the United Kingdom, it has been said that class is relative to where you have come from, similar to the United States where class is more defined by who as opposed to how much; that is, in the UK and the US people are born into the upper class. The American upper class is estimated to constitute less than 1% of the population. By self-identification, according to this 2001-2012 Gallup Poll data, 98% of Americans identify with the 5 other class terms used, 48-50% identifying as "middle class."[5]

The main distinguishing feature of the upper class is its ability to derive enormous incomes from wealth through techniques such as money management and investing, rather than engaging in wage-labor or salaried employment.[6][7][8] Successful entrepreneurs, CEOs, politicians, investment bankers, venture capitalists, heirs to fortunes, some lawyers, top flight physicians, and celebrities are considered members of this class by contemporary sociologists, such as James Henslin or Dennis Gilbert.[6] There may be prestige differences between different upper-class households. An A-list actor, for example, might not be accorded as much prestige as a former U.S. President,[7] yet all members of this class are so influential and wealthy as to be considered members of the upper class.[6] At the pinnacle of U.S wealth, 2004 saw a dramatic increase in the numbers of billionaires. According to Forbes Magazine, there are now 374 U.S. billionaires. The growth in billionaires took a dramatic leap since the early 1980s, when the average networth of the individuals on the Forbes 400 list was $400 million. Today, the average net worth is $2.8 billion. Wal-Mart Walton family now has 771,287 times more than the median U.S household. (Collins and Yeskel 322)

Upper-class families... dominate corporate America and have a disproportionate influence over the nation's political, educational, religious, and other institutions. Of all social classes, members of the upper class also have a strong sense of solidarity and 'consciousness of kind' that stretches across the nation and even the globe. -William Thompson & Joseph Hickey, Society in Focus, 2005.[7]

A typical home in Connecticut, one of the wealthiest states in the U.S.[9]

Since the 1970s income inequality in the United States has been increasing, with the top 1% experiencing significantly larger gains in income than the rest of society.[10][11][12] Alan Greenspan, former chair of the Federal Reserve, sees it as a problem for society, calling it a "very disturbing trend."[13][14]

In 1998, Bob Herbert of the The New York Times referred to modern American plutocrats as "The Donor Class"[16][17] (list of top donors)[18] and defined the class, for the first time,[19] as "a tiny group – just one-quarter of 1 percent of the population – and it is not representative of the rest of the nation. But its money buys plenty of access."[16]