Uprising of 1953 in East Germany

The Uprising of 1953 in East Germany started with a strike by East Berlin construction workers on 16 June 1953. It turned into a widespread uprising against the German Democratic Republic government the next day. In Germany, the revolt is often called People's Uprising in East Germany (Volksaufstand in der DDR).[1] In remembrance of it, June 17 used to be a national holiday of West Germany until reunification.

The uprising in East Berlin was violently suppressed by tanks of the Group of Soviet Forces in Germany and the Volkspolizei. In spite of the intervention of Soviet troops, the wave of strikes and protests was not easily brought under control. Even after 17 June, there were demonstrations in more than 500 towns and villages.

In July 1952 the second party conference (less important than party congress) of the Socialist Unity Party of Germany (SED) took place in East Berlin. In SED General Secretary Walter Ulbricht's words, there was to be the "systematic implementation of Socialism" (planmäßiger Aufbau des Sozialismus); it was decided that the process of Sovietization should be intensified and the importance of the state expanded. The party was acting on demands made by Stalin.[2]

This meant for example the division of the five Länder into 14 regions (Bezirke) plus East Berlin. This division marked an assault on the remaining middle stratum of the GDR: farmers who owned land, as well as small business owners/tradesmen, who were being forced to give up their independence through raised charges.

This decision was made amid the background of the catastrophic economic situation in the country. In the course of the militarisation pushed by Soviet authorities, direct and indirect military expenditures rose and already made up around 11% of the national budget in 1952. Together with reparation payments, this totalled over 20% of the budget. The economic policies of the SED favoured the development of heavy industry at the expense of the production of food and consumer goods, all of which resulted in a severe crisis in supplying the public with goods. Electricity was turned off in factories and public buildings at the onset of darkness every evening (during peak period).

The dramatic increase of emigration (Republikflucht, brain drain) in the first half of 1953, already high since the establishment of the GDR, constituted a serious economic and social problem. Another factor that contributed to an already complicated political situation was the high number of political prisoners in the GDR. Suppression of the illegal organisation Junge Gemeinde (Young Congregation), wrongly perceived as the central youth organisation of the evangelical church, played a role here. Numerous trainee pastors were imprisoned (e.g. Johannes Hamel and Fritz Hoffmann). Ecclesiastic recreation centres were closed and taken over by the FDJ (e.g.: Schloss Mansfeld and Huberhaus Wernigerode). High school students who belonged to a church were often expelled by the school authorities, sometimes even shortly before school graduation.

Within this complicated background, the decision to raise the work norms (in short the principle 'more work for the same salary') was perceived as a provocation, which would conceivably lead to the deterioration of living standards. The Central Committee decided to address the economic difficulties with a package of changes, which included higher taxes and higher prices, and — most significantly — an increase of the work quotas by 10%.[3]

These changes were coming into force by 30 June 1953, Ulbricht's 60th birthday. Issued as a suggestion, it became in effect a direction that was introduced in all the state-owned enterprises (so-called volkseigene Betriebe) and if the new quotas were not met then workers would have to face a reduction of salaries. The decision was taken on 13–14 May 1953, and the Council of Ministers approved it on 28 May.

Following Stalin's death in March 1953 and the massive increase in emigration the new Soviet government decided to ease the policies Stalin had demanded. On 4 June 1953, the Soviet government, alarmed at reports of unrest, summoned East German leaders to Moscow. Georgy Malenkov warned them that if policy direction were not corrected immediately, there would be a catastrophe.[4] After intense discussion the East German party eased policies and publicly admitted that mistakes had been made. However, according to the historian of East Germany, Manfred Wilke, that admission may have had the unintended effect of inflaming public opinion rather than easing tensions.[2]

On the morning of 16 June, 300 East Berlin construction workers went on strike and marched down Stalinallee, now Karl-Marx-Allee, towards government buildings after their superiors announced a pay cut if they did not meet their work quota. Their numbers quickly swelled and a general strike and protests were called for the next day. The West Berlin-based Radio in the American Sector reported the Berlin events and thus probably helped to incite the uprising in other parts of East Germany which involved more than one million people in about 700 localities.[2] 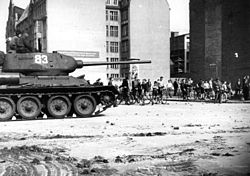 Early on June 17, 40,000 protesters had gathered in East Berlin, with more arriving throughout the morning. Many protests were held throughout East Germany with at least some work stoppages and protests in virtually all industrial centers and large cities in the country.

The original demands of the protesters, such as the reinstatement of the previous lower work quotas, turned into political demands. SED functionaries took to the streets and began arguing with small groups of protesters. Eventually, the workers demanded the resignation of the East German government. The government decided to use force to stop the uprising and turned to the Soviet Union for military support. In total, around 16 Soviet divisions with 20,000 soldiers as well as 8,000 Kasernierte Volkspolizei members were used to quell the uprising.

In Berlin, major clashes occurred along Unter den Linden (between the Brandenburger Tor and Marx-Engels-Platz), where Soviet troops and Volkspolizei opened fire,[5] and around Potsdamer Platz, where several people were killed by the Volkspolizei.[6] It is still unclear how many people died during the uprising or were sentenced to death in the aftermath. The number of known victims is 55;[7] other estimates put the number of victims at least 125.[8]

Earlier West German estimates of the number of people killed were considerably higher: according to the West German Ministry for Inter-German affairs in 1966, 513 people (including 116 "functionaries of the SED regime") were killed in the uprising, 106 people were executed under martial law or later condemned to death, 1,838 were injured, and 5,100 were arrested (1,200 of these were later sentenced to an average of 5 years in penal camps). It also was alleged that 17 or 18 Soviet soldiers were executed for refusing to shoot demonstrating workers,[9] but these reports remain unconfirmed by post-1990 research.[10]

Reaction by the East German leadership

On 18 June 1953 Neues Deutschland, the official party publication of the Socialist Unity Party of Germany (SED) and the daily national newspaper, published an article on its front page titled "Was ist in Berlin geschehen? (What occurred in Berlin?)" that explained the strike and subsequent uprising to be a direct result of the attempts by "western agencies" to disrupt the national stability and legitimacy of the SED.[11]

Other archived editions of Neues Deutschland document similar comments made by party officials that condemned the influence of American popular culture on German youth. The prominence of American films and music in both East and West Berlin influenced the rise of a subculture of youth commonly known as Halbstarken (lit. half-strengths). American films of the era like The Wild One and Rebel Without a Cause, featuring movie stars Marlon Brando and James Dean, respectively, were credited with romanticizing public disobedience and rebellion, as well as encouraging violent crime. Continued occurrences of crime and uprisings by German youths would eventually lead to the decision by SED party officials to begin construction of the Berlin Wall in 1961.[12] 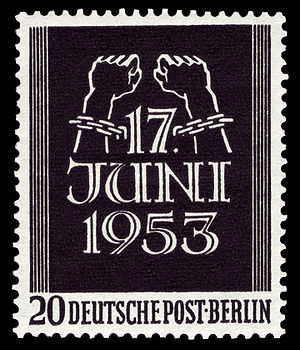 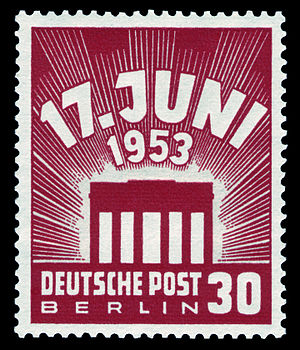 In memory of the 1953 East German rebellion, West Germany established 17 June as a national holiday, called "Day of German Unity". Upon German reunification in October 1990, it was moved to 3 October, the date of formal reunification. The extension of the boulevard Unter den Linden to the west of the Brandenburg Gate, called Charlottenburger Chaussee, was renamed Straße des 17. Juni (English: "17 June Street") following the 1953 rebellion. The event is commemorated in the following poem by Bertolt Brecht:

The Solution
After the uprising of the 17th of June
The Secretary of the Writers Union
Had leaflets distributed in the Stalinallee
Stating that the people
Had forfeited the confidence of the government
And could win it back only
By redoubled efforts. Would it not be easier
In that case for the government
To dissolve the people
And elect another?

West German group Alphaville mention the date explicitly as "the seventeenth of June" but without reference to the year in their 1984 song "Summer in Berlin," from the album Forever Young. When the compilation album Alphaville Amiga Compilation was assembled for release in East Germany in 1988, the song "Summer in Berlin" was submitted for inclusion, but rejected "for political reasons."[13]

The Günter Grass play Die Plebejer proben den Aufstand / The Plebeians Rehearse the Uprising (1966) depicts Brecht preparing a production of Shakespeare's Coriolanus against the background of the events of 1953.