From Infogalactic: the planetary knowledge core
Jump to: navigation, search
This article is about the heavy truck manufacturer. For the Russian producer of light off-road vehicles, see UAZ.

For the defunct "Ural Automobiles and Motors" see Amur (company)

The Urals Automotive Plant, Open Stock Company, (Russian: Ура́льский автомоби́льный заво́д, УралАЗ; Uralskiy Avtomobilnyi Zavod, UralAZ) is a major Russian manufacturer of off-road trucks under the Ural (Cyrillic: "Урал") brand and is part of the GAZ group. Located in the city of Miass, Chelyabinsk Oblast in the Ural Mountains, the plant was established in 1941 when the ZiS truck plant was evacuated from Moscow during World War II.

In the autumn of 1941 Soviet leaders decided to build a plant for the manufacture of military trucks named after Stalin : ZIS in Miass, Chelyabinsk Oblast in the Urals.

Since April 1942 the factory has produced engines and gearboxes. On July 8 1944 the first truck ZIS-5V was built under the brand UralZIS. The new factory became the Ural branch of ZIS UralZIS and was named after Joseph Stalin. At the end of the war the ZIS-5 was considered simple and robust, and thus remained in production for many years. In 1947 the factory started to manufacture newer models.

In 1946 the production version of the gas-21A UralZIS 2.5t began to be fabricated. The truck was produced under the brand UralZIS-352. In 1949 the 5th version of UralZIS was equipped with hydraulic brakes.

A new model, the UralZIS-355, was released in 1956. However, in 1958 the new version of the ZIS-5 was made available for deliveries to Kazakhstan and remained in production until October 16 1963 as an AMO-3 bypass Fiat.

The scientific institute of automotive standardization of Moscow had been working on a new SUV. Production of this type of truck had been assigned to the Ural factory – UralAZ – who got the brand new Ural. The factory had been rebuilt since 1961 and production of the Ural-375 (6x6) 5 t for the army was intensified. For this truck, a new engine was developed. The 1960s were a period of great success for the brand UralAZ which won, for its quality products in large quantities, the Order of the Red Banner of Labour. UralAZ celebrated the total production of 530,000 trucks and 1.3 mln engines. In 1972 and 1975 the two vehicles appeared Ural-375H-377H and the Ural. The manufacture of 6x4 versions continued until 1983.

In 1987, UralAZ celebrated its millionth truck. Governmental industry reorganization and economic reforms forced UralAZ to become a private limited company and turn to the production of civilian vehicles. The models 43204 and 55571 emerged due to this.

Since June 1992 production of 6 t truck Ural-4322 (6x6) started with a new more contemporary cabin. It was equipped with the Ural-744 air cooled V8 engine with an output of 234 HP, diesel Kustanay (KDZ), a manufacturer of Deutz engines under license.

A fire occurred in the spring of 1993 at the engine plant KamAZ and seriously disrupted production. As a result, the company had to search for other engine suppliers.

UralAZ was traditionally oriented only to Russian companies, but began a collaboration with the Italian manufacturer Iveco in 1992. The first result of this joint venture model was presented in May of that year, which was the UralAZ-330-18t Iveco 30ANW (6x6) with a 306 HP, air-cooled diesel engine. Its Iveco chassis is imported.

Since 1997, military vehicles also provide the basis for civilian versions – universal frame of 15-t 53236 for the installation of special equipment. The truck 5323-22 (8x8) has cabins and advanced IVECO IVECO engine with two berths.

That same year the 6301 chassis (6x6) was presented with a payload of 10 t with the same cabin. As desired by the buyer, it is possible to install a V6 diesel engine Deutz liquid cooled with a capacity of 272,240 HP, the KamAZ-740.et gearboxes UralAZ, Eaton and Fuller .

Currently, the future of UralAZ is closely related to the creation of new models. UralAZ has a production capacity of 30,000 trucks. Depending on the evolution of the Russian market, production was reduced to 7,000, then 5,400. In 1998, UralAZ sold only 2,489 chassis and the factory came under the procedure of bankruptcy.

Collaboration between UralAZ and IVECO began in 1992.

In May of that year that the first result of joint activity was represented: the truck cover 18 t Iveco UralAZ-330 -30ANW (6x6) with a gross weight of 33.5 t and a diesel engine V8 Deutz air cooled to 306.HP. The contribution of the Russian partner has been limited. The vehicle was designed for an arctic climate with temperatures of - 55 °C.

The new vehicle replaces the Magirus-Deutz-2900-26K-known in Russia, developed in the 70s under the brand IVECO-Magirus and whose production was stopped in Europe for many years. This became the basis of the production range of the new joint venture Iveco-UralAZ formed in late 1994 with a production capacity of 3600 vehicles per year.

All production features the logo IVECO-UralAZ on the radiator grille. However, in the technical press Russian vehicles are frequently called Ural-Iveco.

The first truck is the cab-IVECO-UralAZ 5531, closely derived from the Iveco 330 . On this basis was created for the tractor-trailer and the truck 55311 6x4 or 6x6. Its composition allows a road train him PTR 60 t.

In 1997, a new cab appeared that caps the engine IVECO, they have several standard sizes and annual production was increased to 9000 copies, that of the IVECO EuroTech which is no longer manufactured in Western Europe.

It replaces the old cab Fiat VI and modernized several times. The cabins forwards in the new 6329, on the chassis IVECO EuroTrakker and called UralTrakker. The short version of the car is used on trucks and semitrailer tractors for local transport. 63291 with the main tractor cabin with two berths. The PTR of the entire road is 56 t with a maximum speed of 103 km / h.

The chassis as for all other models are imported plants IVECO like water-cooled diesel engines, the famous Iveco Cursor 14 of the developing 370cv.

In 2008, the ownership structure evolved and the Italian manufacturer Iveco became the majority owner. The General Meeting of April 7, 2009 decided to change the name of the company. "Iveco-UralAZ" was renamed "Iveco-AMT" Ltd. from April 16, 2009.

Iveco-AMT introduced brand new trucks named IVECO Trakker produced by the company in the city of Miass, Chelyabinsk region. "AMT" means: A utomobile / HAI M / Turin. This is based on the locations of the two plants: the assembly is performed in the city of Miass and component production takes place in Turin. 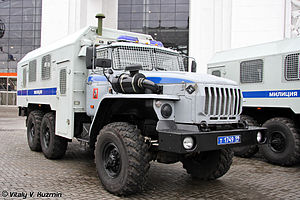 Ural fire appliance are manufactured in partnership with Ural-Siberian Fire and Technical Company which was originally founded as Ural trucks subsidiary UralAzSpetsmash.