listen)) (Azerbaijani: Urmu, Urmiyə, Persian: ارومیه‎‎, Kurdish: Wirmê - ورمێ‎, Armenian: Ուրմիա, Aramaic: ܐܘܪܡܝܐ‎,) is the second largest city in the north-west of Iran, is a city in and the capital of West Azerbaijan Province, Iran. Urmia is situated at an altitude of 1,330 m above sea level, and is located along the Shahar Chay river (City River) on the Urmia Plain. Lake Urmia, one of the world's largest salt lakes, lies to the east of the city and the mountainous Turkish border area lies to the west.

Urmia is the 10th most populated city in Iran. At the 2012 census, its population was 667,499 with 197,749 households.[3] The city's inhabitants are predominantly Iranian Azerbaijanis who speak the Azerbaijani language,.[4][5][6][7] There are also minorities of Kurds, Assyrians, and Armenians.[8] The city is the trading center for a fertile agricultural region where fruits (especially apples and grapes) and tobacco are grown.

An important town by the 9th century, Urmia was seized by the Seljuk Turks (1184), and later occupied a number of times by the Ottoman Turks. For centuries the city has had a diverse population which has at times included Muslims (Shias and Sunnis), Christians (Catholics, Protestants, Nestorians, and Orthodox), Jews, Bahá'ís and Sufis. Around 1900, Christians made up more than 40% of the city's population, however, most of the Christians fled in 1918[9][10][10][11] as a result of the Persian Campaign during World War I and the Armenian and Assyrian Genocides.

The name Urmia originated in the Kingdom of Urartu. Urartian fortresses and artifacts found across Azerbaijan and into the Azerbaijan province of Iran denote an Urartian etymology.[12] The city's Armenian population also complements the idea of an Urartian origin. According to Vladimir Minorsky, there were villages in the Urmia plain as early as 2000 B.C., with their civilization under the influence of the Kingdom of Van. The excavations of the ancient ruins near Urmia led to the discovery of utensils that date to 2000 years B.C.. In ancient times, the west bank of Urmia Lake was called Gilzan, and in the ninth century B.C. an independent government ruled there, which later joined the Urartu or Mana empire; in the eighth century B.C., the area was a vassal of the Asuzh government until it joined the Median Empire after its formation. Richard Nelson Frye also suggested an Urartian origin for the name.[13]

T. Burrow connected the origin of the name Urmia to Indo-Iranian urmi- "wave" and urmya- "undulating, wavy",[14] which is due to the local Assyrian folk etymology for the name which related "Mia" to Syriac meaning "water." Hence Urmia simply means 'Watertown" — a befitting name for a city situated by a lake and surrounded by rivers, would be the cradle of water.[15] This also suggests, that the Assyrians referred to the Urartian influence in Urmia as ancestors of the inhabitants of the Sumerian city state Ur, referenced Biblically as "Ur of the Chaldees". Further association of the Urmia/Urartian/Ur etymology from the Assyrian folk legend is the fact that the Urartian language is also referenced as the Chaldean language, a standardized simplification of Neo-Assyrian cuneiform, which originated from the accreditation to Urartian chief god Ḫaldi or Khaldi. Thus the root of Urmia is an Assyrian reference to the etymology of the Urartu/Ur Kingdoms and the Aramaic word "Mia" meaning water, which as T. Burrow noted, referenced the city that is situated by a lake and surrounded by rivers.

As of 1921, Urmia was also called, Urumia and Urmi.[16] During the Pahlavi Dynasty (1925–1979), the city was called Rezaiyeh[nb 3] (Persian: رضائیه‎‎) after Rezā Shāh, the dynasty's founder, whose name ultimately derives from the Islamic concept of rida via the Eighth Imam in Twelver Shia Islam, Ali al-Ridha. 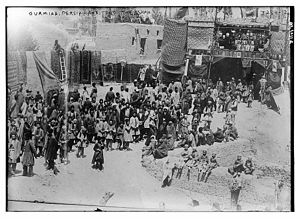 People of Urmia awaiting the Shah, 1911 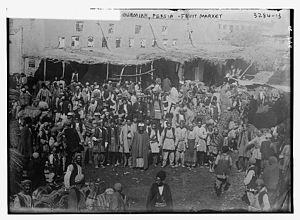 According to historical documents, the western part of the Urmia Lake has been a center of attention of the prehistoric nations, 6 km (3.7 mi) southeast of the lake which competes with the oldest hills of Mesopotamia, Asia the Minor, and the Iranian Plateau.

The Columbia Encyclopedia mentions that Urmia was an important town in the region during the 9th century.

The Ottoman Turks made several incursions into the city, but the Safavids were soon able to regain control over the area. The first monarch of Iran's Qajar dynasty, Agha Muhammad Khan, was crowned in Urmia in 1795.

Due to the presence of substantial Christian minority at the end of the 19th century, Urmia was also chosen as a site of the first American Christian mission in Iran in 1835. Another mission soon became operational in nearby Tabriz as well. During World War I the population was estimated as 30,000 by Dr. Caujole, a quarter of which (7,500) were Assyrians and 1,000 were Jews.[11]

During the 19th century, the region became the center of a short lived Assyrian renaissance with many books and newspapers being published in Syriac. Urmia was also the seat of a Chaldean diocese.[17][18]

At the beginning of the First World War tens of thousands of Assyrians and Armenians from Anatolia found refuge in Urmia. The city changed hands several times between Russians and Kurds the following two years.[19] The influx of Christian refugees and their alliance with the Russians angered the Muslims who attacked the Christian quarter in February 1918, The better armed Assyrians managed however to capture the whole city following a brief battle.[19] The region descended into chaos again after the assassination of the Assyrian patriarch Shimun XXI Benyamin at the hands of Simko Shikak one month later. Turkish armies and Samko managed to finally take and plunder the city in June/July 1918.[20] Thousands of Assyrians were massacred as part of the Assyrian Genocide, others found refuge under British protection in Iraq.[20][21]

The city has been home to various ethnic groups during its long history. The population of Urmia in the early Islamic period were Christian.[23] At the beginning of the 20th century, the city's population had a significant Christian minority (Assyrians and Armenians).[9][24] By 1900 the Christianity population of the town had grown to some 40-50 percent.[25][26] According to Macuch, and Ishaya, the city was the spiritual capital of the Assyrians were influenced by four Christian missions which were established in the city from period from 1830 to the end of World War I.[27] A large number of the Assyrians and Armenians were killed in 1914 as result of the Armenian and Assyrian Genocide[28] which led to a shift in the city's demographics.[27] During the era of Reza Shah Pahlavi, Iranian Assyrians were invited to return to the region and several thousand did return. There are around 5,000 Assyrians left in the city,[29] or around 1% of the population.

Until the Iran crisis of 1946 and the Establishment of the State of Israel in 1947 several thousand Jews also lived Urmia and their language (Lishán Didán) is still spoken by an aging community in Israel.

Today the majority of the population can also speak the official language of Iran, Persian, in addition to their own native tongue.[30][31][32]

The majority of people are followers of Shia Islam.

The city is the archiepiscopal see of the Eastern Catholic Metropolitan Chaldean Catholic Archeparchy of Urmyā, which has a suffragan in Salmas. There are also Protestants, Nestorians and Armenian Orthodox. There are four churches in the central part of the city, two being Nestorian, one Armenian and one Chaldean.[33][34]

The city is also home to followers of Sunni Islam, the Bahá'í Faith,Judaism[citation needed] and different kinds of Yazdanism, whose adherents are Kurds.[citation needed] 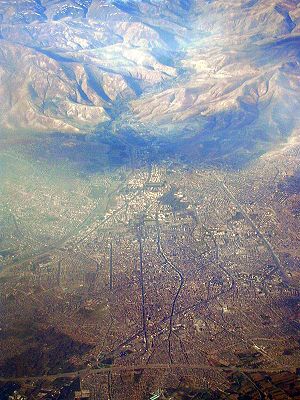 An aerial view of Urmia

Urmia has many parks and touristic costal villages in the shore of Urmia Lake. The oldest park in Urmia, called Park-e Saat, was established in the first Pahlavi's era. Urmia's largest park is Ellar Bagi Park (Azerbaijani "People`s Garden") along the Shahar Chayi, or the "City River".

Sport is an important part of Urmia's culture. The most popular sport in Urmia is volleyball. Urmia is Iran's volleyball capital,its because of ranks that Shahrdari Urmia VC got in Iranian Volleyball Super League and for the great volleyball players that are in Iran men's national volleyball team (such as Saed Marouf, Abdolreza Alizadeh, Milad Ebadipour, etc.) and first class coaches in Iran. Recently Urmia is also called "the city of volleyball lovers" by the Fédération Internationale de Volleyball (International Volleyball Federation, FIVB) official website. 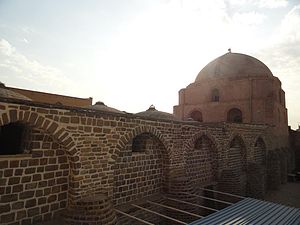 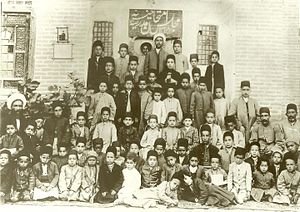 The first modern style school established in urmia in 1834.[38] 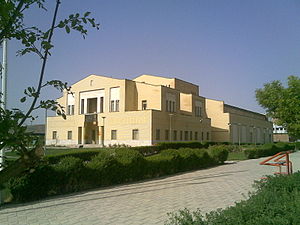 Urmia was an important center for higher education approximately a century ago, indeed, medical faculty of Urmia which was built by Joseph Cochran and a team of American medical associates in 1878, is the first University of Iran. Unfortunately the faculty became shut down even before establishment of first official university of Iran, University of Tehran.
Nowadays Urmia has become a considerable educational city. The city owns state and private universities and institutes listed below.

Urmia has one state-owned television channel, West Azerbaijan TV. This channel's broadcasts are in both Azerbaijani and Farsis and it broadcasts internationally through satellite Intelsat 902.[39]

Urmia has one radio channel broadcasting in both Azerbaijani, and Farsi. The name of the local radio is Chichest.[39]

Beside other minor Press that are being published regularly.

Most of Urmia's residents travel by car through the system of roads and highways. Urmia is also served by Taxis and public Buss. There are also some private groups which provide services called "Phone-taxi."[citation needed] A metro line for Urmia is under research.[citation needed]

Urmia is linked to Europe through Turkey's roads and Sero border crossing. Urmia Airport opened in 1964 and was the first international airport in West Azerbaijan county, Iran. As of April 2015 it only has regularly scheduled domestic flights to Tehran's Mehrabad International Airport. The city is not servied by Iran National Railways (IRIR, Persian: رجا ).

The Iranian government operates public hospitals in the Urmia metropolitan region. There are also a number of private hospitals and medical centers in the city. Hospitals include:[citation needed]

The Turkish government has a consulate on Beheshti Ave., Urmia, Iran.

Within its long history Urmia was always the origin for many Iranian illumination and modernization movements. This is why the city was the hometown of numerous Iranian dominant figures including many Iranian politicians, revolutionaries, artists, and military leaders. Here a partial list of some of most notable people who born or lived in Urmia.