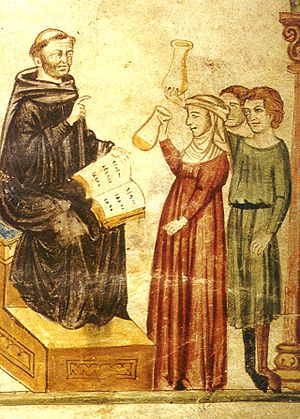 People showing a sample of urine to the physician Constantine the African.

Uroscopy is the historic medical practice of visually examining a patient's urine for pus, blood, or other symptoms of disease. It dates back to ancient Egypt, Babylon, and India. It was particularly emphasized in Byzantine medicine.

By modern medical standards, uroscopy is considered to be a very limited means of obtaining evidence for the correct diagnosis of a patient's condition. In addition, many of the assumptions made by ancient physicians regarding uroscopy have proved to be quite incorrect and unscientific. However, visual examination of a patient's urine may provide preliminary evidence for a diagnosis, but is generally limited to conditions that affect the urinary system such as infection turbidity or blood infection or haemorrhage.

How Uroscopy Flask is Used

A uroscopy flask is a piece of glass that is circular at the bottom, while there is a thin neck at the top, and on top of that neck there is an opening for urine. In order for a doctor to examine a patients urine one would have to urinate into a uroscopy flask. A uroscopy flask is a glass bottle that must be transparent. If there is any color to the uroscopy flask, diagnosis could be wrong. In the process of uroscopy, color is very crucial to find diseases. If the uroscopy flask has a tint of color, the doctor may not be able effectively diagnose the patient. The glass must also have an even thickness throughout the flask. If the top is very thin glass and the bottom is thick glass, then the impurities in the top may look different from the top and bottom. While in all actuality they could be the very same impurities. The impurities in urine have varying shapes, uneven glass will corrupt the diagnosis.

The temperature at which the urine is examined is a very important factor to consider in the process of uroscopy. When a patient urinates, the urine will be warm, so it is necessary for it to stay warm for proper evaluation. The external temperature should be the same as the internal temperature. When the temperature of urine goes down the bubbles in it will change. Some of them will disappear, but some will remain. With the temperature decrease particles and impurities will be more difficult to evaluate. They will move toward the middle of the flask, then sink to the bottom. They will all mix, making it more difficult to see the impurities.

Another problem with urine cooling is that it would become thicker. The longer that it had to cool down the more likely it was that the crystals in the it would bond together, causing it to thicken. This could lead to a false diagnosis, that is why doctors usually inspected the urine quickly.

Richard Bright in the 19th century A.D. invented a technique that allowed doctors to examine a patients urine effectively after the temperature had dropped. The process involved heating water, then inserting the uroscopy flask containing cooled urine. This would heat the urine causing the crystals that formed during loss of temperature to break down. As a result the urine will become thin again. This process is very effective, but a doctor should “also be careful not to shake them much before you inspect them for you will move the particles and destroy the bubbles and dilute the deposits and confuse the situation,” (The Late Greco-Roman and Byzantine Contribution to the Evolution of Laboratory Examinations of Bodily Excrement. Part1: Urine, Sperm, Menses and Stools, Pavlos C. Goudas).

Disease in which the pancreas does not function properly. Victims of this disease will have high glucose blood sugar. Victims may suffer from: cardiovascular disease (doubled risk), chronic kidney disease (it is the main cause for dialysis in developed world adults), retinal damage which can lead to blindness and is the most significant cause of adult blindness in the non-elderly in the developed world, nerve damage, erectile dysfunction, to gangrene with risk of amputation of toes, feet, and even legs.

Doctors would test by tasting the urine. A sweet taste meant the patient had diabetes.

Yellowish discoloration of the whites of the eyes, skin, and mucous membranes caused by deposition of bilirubine in these tissues. It occurs as a symptom of various diseases, such as hepatitis, that affect the processing of bile. Also called icterus.

Doctors would test by using their vision. If the urine had a brownish tint then the patient would most likely have jaundice.

The kidneys are supposed to filter wastes (especially urea) from the blood and excrete them, along with water, as urine. When they are not performing this task the patient is suffering from kidney disease. The medical field that studies the kidneys and diseases affecting the kidney is called nephrology, from the Ancient Greek name for kidney.

Doctors would test urine using a visual examination. If the urine was red and/or foamy the patient was suffering from kidney disease.

When a patient develops an uncontrolled, abnormal, circumscribed growth of cells in the urinary tract.

Doctors would test urine by using a visual examination. If the urine had blood in it the patient was suffering from tumors in the urinary tract.

Uroscopy was important to the Roman and Byzantine eras, because it allowed doctors to diagnose patients without technology. This was an era in which there was no microscope, stethoscope, or even thermometers. All that was needed was a uroscopy wheel, uroscopy flask, and an experienced doctor to be able to give a diagnosis. It was a very simple procedure that a doctor could determine a patients problem by simply tasting and/or looking at their urine.

Uroscopy was also necessary, because the Hippocratic Oath did not allow doctors to perform any type of surgery. It stated “I will not cut for stone, even for patients in whom the disease is manifest . . .” (Hippocratic Oath). Doctors needed a different way to find out the problems with their patients. That is when the uroscopy test became involved. It followed the Hippocratic Oath and was a very effective test for that particular time period.

Uromancy is a form of divination whose origins begun with uroscopy. It is performed by reading the bubbles in urine that form when urinating in a pot. In uromancy, it is said that the examination of urine does not only give indications of a person's health, but also foretells the future.