The Uruguayan Air Force (Fuerza Aérea Uruguaya or FAU) is one of the three main branches of the Armed Forces of Uruguay under the Uruguayan Ministry of Defense. The current head of the force is General of the Air Washington R. Martinez.

Military aviation in Uruguay was born on 17 March 1913 when the Military Aviation Academy (Escuela de Aviación Militar) was formed at a small airport 50 km from Montevideo. The first aircraft were a Farman Longhorn biplane and a Blériot XI monoplane. As with many other Latin American countries, flight instruction was initially performed by a European (in this case French) instructor. Ten army officers formed the select group chosen to be the first Uruguayan military aviators. Among them were Cpt Juan Manuel Boiso Lanza and Lt. Cesáreo L. Berisso. Boiso Lanza was the first fatality of the FAU, dying in a plane crash on 10 August 1918; he later became the namesake of Cpt Boiso Lanza Air Base in Montevideo, the current FAU headquarters. Berisso became the first commander of the Air Force flight school and was later the namesake of Gen. Cesáreo Berisso Air Base in Carrasco, the headquarters of Air Brigade I.

Along with two other young officers, Adhemar Saenz Lacueva and Esteban Cristi, they gained their military aviator rating in Argentina and Chile and formed the Military Aeronautical School on 20 November 1916. This school was the only military aviation facility in Uruguay until 1935. Several European aircraft types were used in fairly large numbers during the twenties, among them sixteen Avro 504Ks, thirteen Breguet 14s, five Castaibert 913-IVs, twenty-eight Nieuport 27s. These pioneering years saw many air routes opened and an overall increase in the awareness of the military potential of this nascent force.

In 1935 the school was transformed into the Military Aeronautics division (Aeronáutica Militar,) and five units were created as well as several airbases. Typical aircraft of the thirties and forties were European types like the Potez XXV A.2 TOE, the SPAD S.VII and S.XIII, the de Havilland DH 82A, and the IMAM Ro.37; but this era also saw the transition to aircraft of American pedigree. Beech AT-11 and Douglas C-47 transports, Waco JHD and NAA Texan trainers, and NAA B-25J bombers were used in this period. The arrival of F-51 Mustangs in the early 50s notably enhanced the capabilities of the air force. There were now nine Aviation Groups and the Military Aeronautics division was officially renamed the Military Air Force (Fuerza Aérea Militar) on 4 December 1952. This change in nomenclature was important because it signified the independence of the branch from the army command structure. The new force was reorganized into three commands (tactical, training, and material) and a brigade structure was implemented along with a fully staffed headquarters.

The Uruguayan Air Force grew from this foundation. Later, some new units were created such as the Aerial Commands, but no radical changes were made. The FAU received its first jets when Lockheed T-33s and F-80s arrived in 1955 and 1958.[2] The FAU also employed the de Havilland Chipmunk, using 10 from 1954 to 1962. The first helicopters were Bell 47s and Hiller H-23Fs, followed by the venerable Bell UH-1B Hueys.

A substitute for the two Lockheed C-130B is needed in near time, despite the Program Depot Maintenance(PDM) and major upgrade realized by Chilean aircraft manufacturer ENAER.[3][4] Candidates are the EADS CASA C-295 and possibly Shaanxi Y-8 despite no official statement has been done. In the medium and light transport branch Bandeirantes are being restored to flight by Algar Aviation in Brazil since the end of 2013.[5][6] In 2009 two CASA C-212 were bought from Sweden as a temporary solution and another two former-Portuguese Air Force C-212-300 are to be incorporated in 2015.[7][8] China has offered Harbin Y-12 and rumours about a purchase of some Cessna 208 were deny recently.

The Uruguayan Air Force is looking for a new fighter plane as its fleet of Dragonflies are reaching the end of their operative life. In May 2013 eighteen refurbished Sukhoi Su-30 MkI were offered by the Russian Federation and Sukhoi in remarkably favorable conditions that included credit facilities and an agreement branch for maintenance. These conditions were offered for the Yak-130 Mitten, too. By December 2013 Uruguayan personnel flew this plane in Russia.[9] Current negotiations are ongoing.[10]

According to Scramble a number of Cessna A-37B were purchased from the Ecuadorian Air Force in January 2014. In August 2014 the Uruguayan and Swiss governments discussed a possible agreement for the purchase of ten Swiss Air Force Northrop F-5E/F Tiger II plus engines, spare parts and training.[11]

Air Brigade I was founded as Nº1 Aeronautics on 1 April 1936. It originally consisted of eight Potez XXV biplanes. Today, the brigade includes the Central Office for Assistance and the Carrasco Central Coordinator for Rescue. It also includes

The Aeronautics Technical School (Escuela Técnica de Aeronáutica) is located in Toledo Sur in the Department of Canelones.[14] 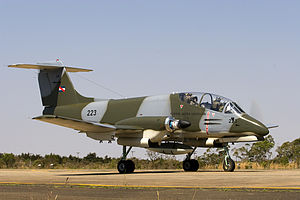 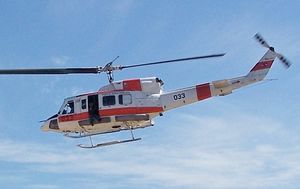 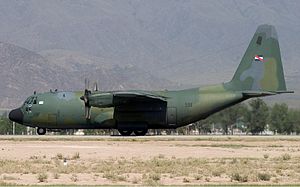 Officers wear their rank insignia on their sleeves; the insignia are nearly identical to that used by the RAF and air forces of Commonwealth nations.[16]