The Uzbek Soviet Socialist Republic (Uzbek SSR; Uzbek: Ўзбекистон Совет Социалистик Республикаси, Oʻzbekiston Sovet Sotsialistik Respublikasi'; Russian: Узбекская Советская Социалистическая Республика, Uzbekskaya Sovetskaya Sotsialisticheskaya Respublika), also referred to as Soviet Uzbekistan or Uzbekistan, was one of the republics of the Soviet Union. It was created in 1924. It was governed by the Uzbek branch of the Soviet Communist Party, the only legal political party, from 1925 until 1990. In December 1991, it became independent as the Republic of Uzbekistan.

In 1928, the collectivization of land into state farms was initiated, which lasted until the late 1930s.

In 1937–38, during the Great Purge, a number of alleged nationalists were executed, including Faizullah Khojaev, the first prime minister.

During World War II, many industries were relocated to the Uzbek SSR from vulnerable locations in western regions of the USSR to keep them safe. Large numbers of Russians, Ukrainians and other nationalities accompanied the factories, altering the demographics of the republic. The demographics situation was further aggravated by Stalin’s relocation of some ethnic groups suspected of collaboration with the Axis powers from other parts of the USSR to the Uzbek SSR. This included large numbers of ethnic Koreans, Crimean Tatars, and Chechens.

During the Soviet period, Islam became a focal point for the antireligious drives of Communist authorities. The government closed most mosques, and religious schools became anti-religious museums.[citation needed] On the positive side was the virtual elimination of illiteracy, even in rural areas. Only a small percentage of the population was literate before 1917; this percentage increased to nearly 100 percent under the Soviets.[citation needed]

Another major development, one with future catastrophic impact, was the drive initiated in the early 1960s to substantially increase cotton production in the republic. This drive led to overzealous irrigation withdrawals of irrigation water from the Amu Darya and the subsequent Aral Sea ecological disaster. 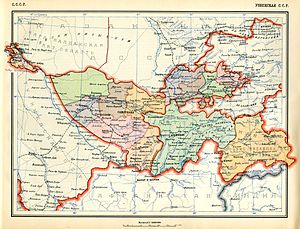 Constitution of the USSR: 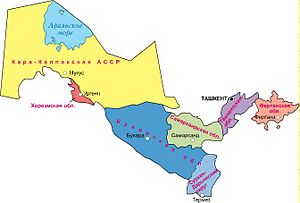 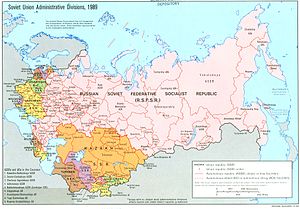 Uzbek SSR in the Soviet Union, 1989 (Navoi Oblast not shown).