From Infogalactic: the planetary knowledge core
Jump to: navigation, search
This article is about the United States Army formation established in 1918. For the formation of the Spanish American War, see Fifth Army Corps (Spanish-American War). For the American Civil War formation, see V Corps (Union Army).

V Corps was a regular corps of the United States Army during World War I, World War II, Cold War, Kosovo, and War on Terrorism. It was officially inactivated on September 15, 2013 at Lucius D. Clay Kaserne, Germany.[1][2]

V Corps was organized July 7–12, 1918 in the Regular Army in France, as part of the American Expeditionary Forces. By the end of World War I, the Corps had fought in three named campaigns.

The corps's shoulder patch, a pentagon whose points lie on an imaginary circle 2 1/8 inches (5.40 cm) in diameter whose edges are white lines 3/16 inch (.48 cm) in width and whose radial lines are white 1/8 inch (.32 cm) in width, was approved on December 3, 1918. The triangles thus outlined in white are flag blue. The pentagon represents the number of the Corps, while blue and white are the colors associated with Corps flags.[3]

After Nazi Germany declared war on the United States on December 11, 1941, the corps deployed (January 1942) the first American soldiers to the European Theater of Operations, United States Army. That initial deployment was known as the U.S. Army Northern Ireland Force or MAGNET. On June 6, 1944, V Corps assaulted Omaha Beach, Normandy. Corps soldiers then broke out from the beachhead, liberated Paris and Sedan, Ardennes, and raced to the German border. After liberating Luxembourg, V Corps fought in the Battle of the Bulge, captured Leipzig, made first contact with the Red Army at Torgau, and, south in Czechoslovakia, liberated Plzeň by May 1945.

On December 1, 1950 due to concern of a Soviet threat to Western Europe during the Korean War, Seventh Army was activated as a field army in Europe (Ca. 4 years earlier, in March 1947, U.S. European Command [EUCOM] had designated that all EUCOM combat forces were to convert to “Occupation duties”). Seventh Army absorbed the two main Occupation Duty forces then in Germany, namely the 1st Infantry Division and the United States Constabulary (Note: By middle 1948 limited combat training had been restored in EUCOM). In December, 1950 President Truman’s declared National Emergency due to the Korean War included a 4 division augmentation of U.S. Forces in Europe. In May 1951 the 4th Infantry Division arrived in United States Army Europe (USAREUR) in Germany, and on August 3, 1951, V Corps was reactivated and assigned to the Seventh Army in USAREUR. In July the 2d Armored Division arrived in Germany, and on August 25, 1951 the 4th Infantry Division (HQ: Frankfurt) and 2d Armored Division (HQ: Bad Kreuznach) were assigned as V Corps divisions. In November 1951 VII Corps was assigned to the Seventh Army, and the long serving U.S. Zone of Occupation division, the 1st Infantry Division (HQ: Wuerzburg), plus the newly arrived 28th Infantry Division and 43d Infantry Division, were assigned as its divisions. The Constabulary was inactivated upon the arrival of the four U.S. division augmentation forces to Germany. V Corps was assigned to the northern area of the U.S. Occupation Zone of Germany (which included the Fulda Gap), and the VII Corps was assigned to the southern area of the U.S. Zone (one of the National Guard divisions was stationed in Munich and the other was between Munich and Stuttgart). 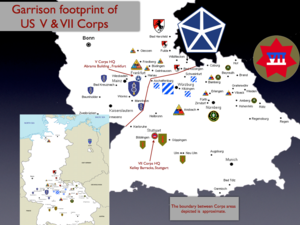 Corps sectors of military responsibility in NATO's central region in the 1980s.

After the Cold War collapse of the Warsaw Pact, V Corps soldiers deployed both units and individuals to Saudi Arabia for the Gulf War; and to other operations in Kuwait, northern Iraq, Croatia, Somalia, Republic of Macedonia, Rwanda, and Zaire.

In December 1994, as part of the realignment of United States Armed Forces, V Corps moved from the IG Farben Building to Campbell Barracks in Heidelberg, severing a forty-three year tie with Frankfurt. The corps reached out to the armed forces of eastern Europe with numerous initiatives to foster closer ties and better understanding. Maintaining the NATO commitment, V Corps in 1994 created two bi-national corps with Germany. For Command Component Land Heidelberg missions, the corps commanded the 13th (German) Armored Infantry Division, while II (German) Corps commanded the 1st Armored Division.

In December 1995, V Corps deployed 1st Armored Division and elements of six separate brigades for the Implementation Force (IFOR). The corps headquarters and Headquarters Company, the 3d Support Command, and the separate brigades helped form the National Support Element headquartered in Hungary for United States Armed Forces in Bosnia. Brigades of the two divisions rotated in the peace enforcement mission for a number of years in Bosnia. Headquarters and Headquarters Company, V Corps, was decorated with the Army Superior Unit Award in 1998 in recognition of the unit's performance in Implementation Force (IFOR). In April 1999, V Corps deployed the headquarters and subordinate units to Albania as Task Force Hawk, a force involved in the ongoing crisis in Kosovo. The 1st Infantry Division served in Kosovo twice and the 1st Armored Division served once, in addition to V Corps separate brigades. 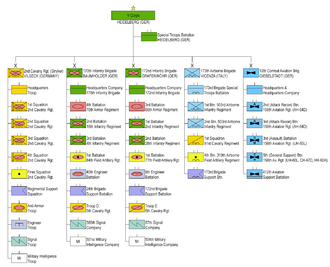 At the end of 2002, V Corps deployed to Kuwait under United States Central Command for the Iraq War. The United States-led coalition brought about a regime change in Iraq and satisfied international concerns about Iraq and weapons of mass destruction. The corps and its maneuver brigades crossed into Iraq on March 21, 2003 as the main effort. In sixteen days of fighting, V Corps advanced more than 540 miles straight-line distance from Kuwait to Baghdad, decisively defeated the Iraqi Armed Forces, and toppled the regime of Saddam Hussein.

On June 15, 2003, the corps formed Combined Joint Task Force 7, based in Baghdad, and continued military operations to pacify the remainder of Iraq, rebuild the country, and create democratic institutions. As part of Combined Joint Task Force 7 mission, V Corps soldiers sought out and arrested or killed the major figures in the previous Iraqi regime, culminating in the arrest of Saddam Hussein himself. On February 1, 2004, V Corps was succeeded in Combined Joint Task Force 7 by III Corps and redeployed to its home station in Heidelberg, Germany. In recognition of its combat achievements in Iraq, the Department of the Army, in 2004, awarded the Headquarters and Headquarters Company the Meritorious Unit Commendation (Army).

In January 2006, the corps, deployed to Iraq and replaced XVIII Airborne Corps as the command and control element for Multi-National Corps–Iraq. During its second year-long deployment, which ended on December 14, 2006, V Corps continued to lead coalition forces and made great strides battling a widespread insurgency, and conducting a massive rebuilding effort.

From 2012 to 2013, V Corps served in the Islamic Republic of Afghanistan, providing command and control of all U.S. ground forces stationed there.[4]

On 16 February 2012, it was announced that Headquarters and Headquarters Battalion, V Corps would inactivate upon redeployment from Afghanistan per guidance issued by the Department of the Army earlier that same year.[5] On 12 June 2013, V Corps was awarded an Army Superior Unit Award, a Meritorious Unit Commendation, then ceremonially inactivated at Biebrich Palace, Wiesbaden, Germany.[6]