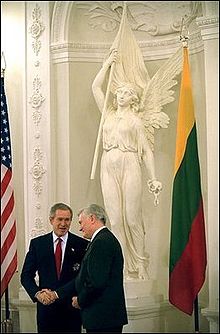 In Lithuania, the President's tenure lasts for five years; Adamkus' first term in office began on 26 February 1998 and ended on 28 February 2003, following his defeat by Rolandas Paksas in the next presidential election. Paksas was later impeached and removed from office by a parliamentary vote on 6 April 2004. Soon afterwards, when a new election was announced, Adamkus again ran for president and was re-elected. His approval ratings were high[2] and he was regarded as a moral authority in the state.[3] He chose not to run for re-election during the Lithuanian presidential election in 2009 and was succeeded on 12 July 2009 by Dalia Grybauskaitė.

He is married to Alma Adamkienė, who is involved in charitable activities in Lithuania. The President remains involved in international development, and is a member of the European Academy of Diplomacy.

Adamkus was born into a Roman Catholic family in Kaunas. His father was one of the first heads of the Lithuanian Air Force School in the Republic of Lithuania. As a young man, Adamkus joined the underground against the first Soviet occupation of 1940. During World War II, his family fled Lithuania in order to avoid the second Soviet occupation in 1944. He attended the University of Munich in Germany before emigrating to the United States in 1949. Fluent in five languages — Lithuanian, Polish, English, Russian, and German — he served as a senior non-commissioned officer with the United States 5th Army Reserve's military intelligence unit in the 1950s. During his youth, Adamkus was interested in track and field. He also set national record at 100 metres running.[4] In 1951, Adamkus got married to Alma Nutautaite. However, they have no children.

After arriving in Chicago, Illinois as a displaced person, he worked in an automobile factory and later as a draftsman. Adamkus graduated as a civil engineer from Illinois Institute of Technology in 1961. While a student, Adamkus, together with other Lithuanian Americans, collected about 40,000 signatures petitioning the United States government to intervene in the ongoing deportations of Lithuanians to Siberia by the Soviets.[5] The petition was presented to then-Vice President Richard Nixon. Adamkus also raised concerns about other Soviet activities in occupied Lithuania to United Nations Secretary General Dag Hammarskjöld in 1958, and to President John F. Kennedy in 1962.[5]

He joined the United States Environmental Protection Agency (EPA) at its inception in 1970, working in Cincinnati. In 1981, he was appointed regional administrator by President Ronald Reagan, and was responsible for all air, water, hazardous waste, and other pollution control programs in Illinois, Indiana, Michigan, Minnesota, Ohio, and Wisconsin. In 1985, President Reagan presented him with the Distinguished Executive Presidential Rank Award – the highest honor that can be bestowed upon a civil servant.

In 1972, Adamkus visited Lithuania for the first time in almost thirty years. He was a member of the official delegation from the United States attending an environmental conference in Moscow. As perestroika took root in the Soviet Union, Adamkus's visits to his homeland became more frequent. Valdas Adamkus served as regional administrator of the EPA for sixteen years, and retired in 1997, after twenty-nine years of service. Upon his retirement, he received a congratulatory letter from President Clinton and a Distinguished Career Award from EPA Administrator Carol Browner. EPA Region 5 presented him with the newly established "Valdas V. Adamkus Sustained Commitment to the Environment Honor Award".

Shortly after leaving the EPA, Valdas Adamkus moved back to Lithuania. Soon after his decision to run for presidency in 1998, he faced a legal battle in the Lithuanian courts, as doubts arose whether Adamkus was eligible to run for presidency due to the length of time he had spent abroad and the possibility that he might not meet minimum residency requirements. However, the court resolved the case in Adamkus' favor and no other obstacles remained other than his U.S. citizenship, which he officially renounced at the American Embassy in Vilnius.[6] He was elected as President of Lithuania in 1998, defeating Artūras Paulauskas in the runoff, serving from then until 2003, when he ran for re-election, but was unexpectedly defeated by Rolandas Paksas. He returned to politics as surprisingly as he had left, after the presidential scandal of 2003/2004, when his former rival Paksas was impeached and removed from office. Adamkus ran for the presidency again and was re-elected.

The first round of the 2004 election was held on 13 June 2004, with Adamkus securing 30% of the vote – more than any other candidate. Paksas could not run for office again, because a ruling from Lithuania's Constitutional Court disallowed him from running for public office and he was, therefore, unable to register as a candidate. A runoff election was held on 27 June 2004, which Adamkus won with about 52% of the votes against Kazimira Prunskienė. By 2009 he had served the two presidential terms permitted by the Constitution of Lithuania and was succeeded as president by Dalia Grybauskaite.

In 2003 Valdas Adamkus was named UNESCO Goodwill Ambassador for the Construction of Knowledge Societies. The Director-General of UNESCO, Koïchiro Matsuura, noted that Valdas Adamkus was named as Ambassador "in recognition of his dedication to the Organization's aims and ideals and with a view to benefiting for the construction of knowledge societies from his wisdom and extensive experience in many of UNESCO's areas of concern, in particular promotion of social development, cultural diversity, dialogue and international cooperation."[7]

Under the presidency of Valdas Adamkus, Lithuania actively promoted democracy in the formerly Soviet Eastern European and Asian nations. President Adamkus, together with President Aleksander Kwaśniewski, Javier Solana, Boris Gryzlov and Ján Kubiš, served as a mediator during Ukraine's political crisis, when two candidates in the 2004 presidential election, Viktor Yanukovych and Viktor Yushchenko, each claimed victory. President Adamkus recalled in an interview that "when I asked what we could do to help, Kuchma said the friends of the Ukrainian people should drop whatever they were doing and come to Kiev immediately.".[8] The next day international mediators met in Ukraine. The crisis was resolved after a new election was held.

Valdas Adamkus and his Estonian counterpart Arnold Rüütel rejected an invitation to participate in a commemorative celebration of the end of World War II in Europe in 2005. President Adamkus expressed the view that the war's end, in Lithuania, marked the beginning of a fifty-year Soviet occupation and repression. In response, on 22 July, the United States Congress unanimously passed a resolution that Russia should "issue a clear and unambiguous statement of admission and condemnation of the illegal occupation and annexation by the Soviet Union from 1940 to 1991 of the Baltic countries of Estonia, Latvia, and Lithuania",[9] but Russia refused.

President Adamkus supported an active dialogue between European Union member states and those former Soviet republics such as Georgia, Ukraine, and Moldova, that are actively seeking membership in the EU. He expressed support for these candidate members during the Community of Democratic Choice in 2005, at the Vilnius Conference 2006, and on several other occasions.

Valdas Adamkus is an Honorary Member of The International Raoul Wallenberg Foundation.

Valdas Adamkus enjoys a very high approval rating in Lithuania. He was also recognized for the second time for his support of Lithuanian youth. President Adamkus was actively involved in government reorganizations in 2004 and 2006. In his 2006 State of the Nation address,[10] Adamkus stated that his top priorities were:

Valdas Adamkus has been honored with the following decorations:

Valdas Adamkus holds honorary doctorates at universities in Lithuania, the United States and other countries, including: