Valentin Ivanovich Varennikov (Russian: Валентин Иванович Варенников) (December 15, 1923 – May 6, 2009)[1] was a Soviet/Russian Army general and politician, best known for being one of the planners and leaders of the Soviet war in Afghanistan, as well as one of the instigators of the 1991 Soviet coup d'état attempt.

Valentin Varennikov was born to a poor Cossack family in Krasnodar. His father, who fought in the Russian Civil War, graduated from the Moscow industrial institute and was a manager. His mother died in 1930 when he was seven.

He became a junior officer of the Red Army and fought in the Battle of Stalingrad as well as in the successful campaigns to retake Ukraine and Belarus from the German army. Varennikov finished the German-Soviet War in the Battle of Berlin as one of the commanders of the Soviet soldiers who captured the Reichstag.

Varennikov stayed in East Germany as an officer of the Soviet troops, stationed there until 1950.

In 1954 he graduated from the Frunze Military Academy in Moscow. Later he graduated from the General Staff Academy. In 1960 he became deputy commander of a motor rifle division. From 1962 to 1966 Varennikov commanded 54th Motor Rifle Division of the Leningrad Military District. In 1964 armed forces inspectors tested the division, and it was awarded as one of the six top divisions of the Ground Forces of the USSR Armed Forces by order of the Minister of Defence.[2] In August 1965 he was enrolled in the General Staff Academy. From 1967 to 1969 he commanded the 26th Army Corps of the Leningrad Military District.

In 1969 Varennikov took charge of the 3rd Shock Army, and in 1979 became a deputy chief of the Soviet General Staff.

During the last few years of the Soviet war in Afghanistan, Varennikov was the personal representative in Kabul of the Soviet Defence Minister and held negotiations with the United Nations Good Offices Mission in Afghanistan and Pakistan members, who oversaw the pullout from the country of Soviet troops between 1988 and 1989.

In 1989 General Varennikov was named Commander-in-chief of Ground forces and a Deputy inister of defence.

In 1991, during the August coup attempt he joined forces opposing former Soviet leader Mikhail Gorbachev. After the coup failure General Varennikov was arrested, tried, and prosecuted together with other coup plotters and was acquitted by the Supreme Court of Russia in 1994, as the court concluded he had merely followed orders and had acted "only in an interest of preserving and strengthening his country".[3] He was the only member of the group of accused plotters who refused to accept an amnesty. 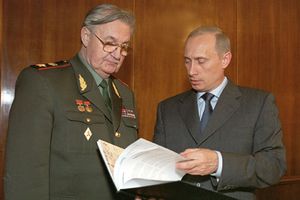 In 1995 Varennikov, as a member of the Communist Party of the Russian Federation, was elected deputy of the State Duma, the lower house of the Russian parliament. In the Duma Varennikov presided over the Committee on Veterans' Affairs.

In 2003 he joined the Rodina bloc as one of its leaders.

Varennikov was one of Russia's most outspoken defenders of Joseph Stalin. During 2008, Varennikov presented the case for Stalin as Russia's greatest historical figure on the Name of Russia television project. Stalin won third place. According to Varennikov: "We became a great country because we were led by Stalin."[5]

Varennikov was a holder of the Hero of the Soviet Union title and is a titular Knight of the Order of Glory, as well as having received numerous other Soviet, Russian and foreign medals and decorations. He held the honorary rank of retired field marshal.

He had two sons and lived in Moscow, where he died on May 6, 2009, aged 85. One of his sons, Vladimir Varennikov, is a retired Lieutenant General in the Russian army, an Afghan war veteran and also a Rodina deputy in the Russian Parliament (Duma).