listen); born 6 March 1937) is a Russian former cosmonaut. She is the first woman to have flown in space, having been selected from more than four hundred applicants and five finalists to pilot Vostok 6 on 16 June 1963. In order to join the Cosmonaut Corps, Tereshkova was honorarily inducted into the Soviet Air Force and thus she also became the first civilian to fly in space.[1]

Before her recruitment as a cosmonaut, Tereshkova was a textile-factory assembly worker and an amateur skydiver. After the dissolution of the first group of female cosmonauts in 1969, she became a prominent member of the Communist Party of the Soviet Union, holding various political offices. She remained politically active following the collapse of the Soviet Union and is still regarded as a hero in post-Soviet Russia.

In 2013, she offered to go on a one-way trip to Mars if the opportunity arose.[2] At the opening ceremony of the 2014 Winter Olympics, she was a carrier of the Olympic flag.

Tereshkova was born in the village of Maslennikovo in Tutayevsky District, Yaroslavl Oblast, in central Russia. Her parents had migrated from Belarus.[3] Tereshkova's father was a tractor driver and her mother worked in a textile plant. Tereshkova went to school in 1945 at the age of eight, but left school in 1953 and continued her education by correspondence courses.[4] She became interested in parachuting from a young age, and trained in skydiving at the local Aeroclub, making her first jump at age 22 on 21 May 1959; at the time, she was employed as a textile worker in a local factory. It was her expertise in skydiving that led to her selection as a cosmonaut. In 1961 she became the secretary of the local Komsomol (Young Communist League) and later joined the Communist Party of the Soviet Union.

Career in the Soviet space program 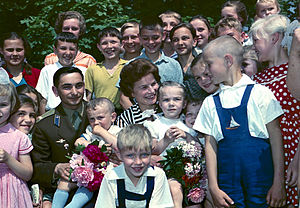 After the flight of Yuri Gagarin in 1961, Sergey Korolyov, the chief Soviet rocket engineer, came up with the idea of putting a woman in space. On 16 February 1962, Valentina Tereshkova was selected to join the female cosmonaut corps. Out of more than four hundred applicants, five were selected: Tatyana Kuznetsova, Irina Solovyova, Zhanna Yorkina, Valentina Ponomaryova, and Tereshkova. Qualifications included that they be parachutists under 30 years of age, under 170 cm (5 feet 7 inches) tall, and under 70 kg (154 lbs.) in weight.

Tereshkova was considered a particularly worthy candidate, partly due to her "proletarian" background, and because her father, tank leader sergeant Vladimir Tereshkov, was a war hero. He died in the Finnish Winter War during World War II in the Lemetti area in Finnish Karelia when Tereshkova was two years old. After her mission she was asked how the Soviet Union should thank her for her service to the country. Tereshkova asked that the government search for, and publish, the location where her father was killed in action. This was done, and a monument now stands at the site in Lemetti—now on the Russian side of the border. Tereshkova has since visited Finland several times. 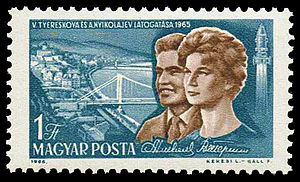 Cosmonauts Andriyan Nikolayev and Valentina Tereshkova on a Hungarian stamp.

Originally it was intended that Tereshkova would launch first in Vostok 5 while Ponomaryova would follow her into orbit in Vostok 6. However, this flight plan was altered in March 1963. Vostok 5 would now carry a male cosmonaut Valery Bykovsky flying the joint mission with a woman aboard Vostok 6 in June 1963. The State Space Commission nominated Tereshkova to pilot Vostok 6 at their meeting on 21 May and this was confirmed by Nikita Khrushchev himself. Tereshkova was exactly ten years younger than the youngest Mercury Seven astronaut, Gordon Cooper.

After watching the successful launch of Vostok 5 on 14 June, Tereshkova began final preparations for her own flight. She was 26 at the time. On the morning of 16 June 1963, Tereshkova and her back-up Solovyova were both dressed in spacesuits and taken to the launch pad by bus. After completing her communication and life support checks, she was sealed inside the Vostok. After a two-hour countdown, Vostok 6 launched faultlessly, and Tereshkova became the first woman in space. Her call sign in this flight was Chaika (English: Seagull; Russian: Ча́йка), later commemorated as the name of an asteroid, 1671 Chaika. 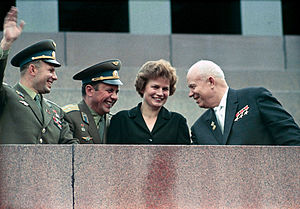 From left to right: Yuri Gagarin, Pavel Popovich, Valentina Tereshkova, and Nikita Khrushchev at the Lenin Mausoleum, during a celebration honoring the Soviet cosmonauts, 1963

Although Tereshkova experienced nausea and physical discomfort for much of the flight,[5] she orbited the earth 48 times and spent almost three days in space. With a single flight, she logged more flight time than the combined times of all American astronauts who had flown before that date. Tereshkova also maintained a flight log and took photographs of the horizon, which were later used to identify aerosol layers within the atmosphere.

Vostok 6 was the final Vostok flight and was launched two days after Vostok 5 which carried Valery Bykovsky into a similar orbit for five days, landing three hours after Tereshkova. The two vessels approached each other within 5 kilometers (3.1 mi) at one point, and Tereshkova communicated with Bykovsky and with Khrushchev by radio.

Even though there were plans for further flights by women, it took 19 years until the second woman, Svetlana Savitskaya, flew into space. None of the other four in Tereshkova's early group flew, and, in October 1969, the pioneering female cosmonaut group was dissolved. 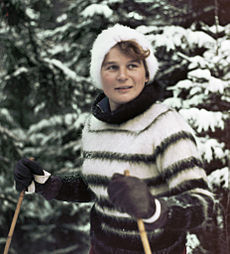 After her flight, Tereshkova studied at the Zhukovsky Air Force Academy and graduated with distinction as a cosmonaut engineer. In 1977 she earned a doctorate in engineering.

Due to her prominence, Tereshkova was chosen for several political positions: from 1966 to 1974 she was a member of the Supreme Soviet of the Soviet Union, from 1974 to 1989 a member of the Presidium of the Supreme Soviet, and from 1969 to 1991 she was in the Central Committee of the Communist Party. In 1997, she was retired from the Russian Air Force and the cosmonaut corps by presidential order.

She was decorated with the Hero of the Soviet Union medal, the USSR's highest award. She was also awarded the Order of Lenin, Order of the October Revolution, numerous other medals, and foreign orders including the Karl Marx Order, United Nations Gold Medal of Peace and the Simba International Women’s Movement Award. She was also bestowed a title of the Hero of Socialist Labor of Czechoslovakia, Hero of Labor of Vietnam, and Hero of Mongolia. In 1990 she received an honorary doctorate from the University of Edinburgh. Tereshkova crater on the far side of the Moon was named after her. 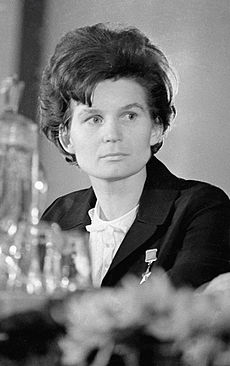 After the collapse of the Soviet Union, Tereshkova lost her political office but none of her prestige. To this day, she is revered as a hero, and to some her importance in Russian space history is only surpassed by Yuri Gagarin and Alexey Leonov. In 2011, she was elected to the State Duma, the lower house of the Russian legislature, where she continues to serve.[6]

Tereshkova's life and spaceflight were first examined (in the west) in the 1975 book: It Is I, Sea Gull; Valentina Tereshkova, the first woman in space by Mitchel R. Sharpe[7] and then again in greater detail of her life and spaceflight in the 2007 book Into That Silent Sea by Colin Burgess and Francis French, including interviews with Tereshkova and her colleagues.

Tereshkova was invited to Prime Minister Vladimir Putin's residence in Novo-Ogaryovo for the celebration of her 70th birthday. While there she said that she would like to fly to Mars, even if it meant that it was a one way trip.[8]

On 5 April 2008, she became a torchbearer of the 2008 Summer Olympics torch relay in Saint Petersburg, Russia.[9] 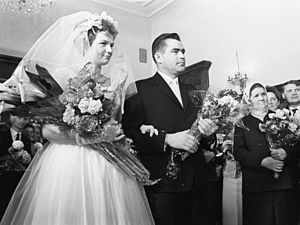 After the Vostok 6 flight a rumour began circulating that she would marry Andriyan Nikolayev (1929–2004), the only bachelor cosmonaut to have flown. Nikolayev and Tereshkova married on 3 November 1963 at the Moscow Wedding Palace with Khrushchev himself presiding at the wedding party together with top government and space programme leaders.

On 8 June 1964, she gave birth to their daughter Elena Andrianovna Nikolaeva-Tereshkova,[12] who became a doctor and was the first person to have both a mother and father who had travelled into space. She and Nikolayev divorced in 1982. Her second husband, the orthopaedist Yuliy G. Shaposhnikov, died in 1999. 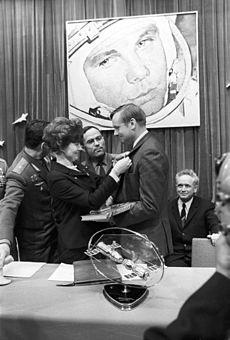 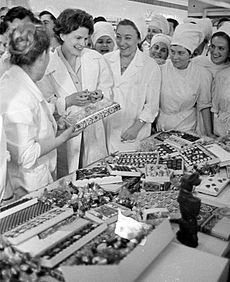 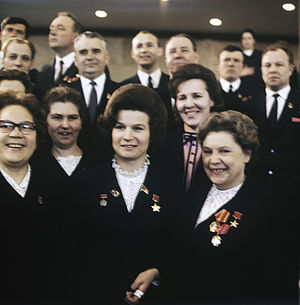 Valentina Tereshkova among delegates at the 24th Congress of the CPSU, 1971. 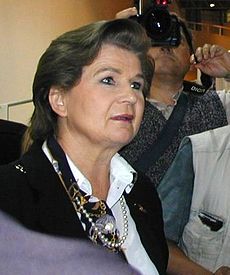 Tereshkova at the Heureka science centre, in Finland, 2002 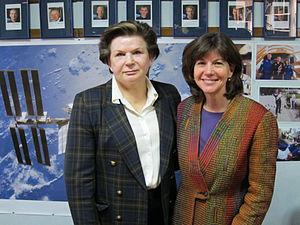 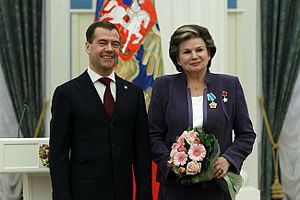 Tereshkova receives the Order of Friendship from Russian President Dmitry Medvedev on 12 April 2011 at the Moscow Kremlin.

Various locations and monuments have been named after Valentina Tereshkova:

A representation of Valentina Tereshkova is included in Kerbal Space Program, named Valentina Kerman who is the first female 'kerbonaut' in the game; she also has the 'badass' personality type, meaning the character responds with awe or pleasure even in extremely dangerous situations.

In 1997, London-based electronic pop group Komputer released a song entitled Valentina which gives a more-or-less direct account of her career as a cosmonaut. It was released as a single and appears on their album The World of Tomorrow. The band Public Service Broadcasting has a song entitled Valentina on their 2015 album The Race for Space in tribute to her. In the same year, Findlay Napier's album VIP: Very Interesting Persons included a song Valentina, written in her honour by Napier and Boo Hewerdine.

In season 3 of Orange is the New Black, Red describes Tereshkova as her hero, and notes her focus in wanting to travel to Mars, despite being in her seventies.

In 2015, a short film entitled Valentina's Dream was released by Meatbingo Productions. The film stars Rebecca Front as Tereshkova and is based on an interview by the former cosmonaut where she expressed a desire to journey to Mars.