Valko Velev Chervenkov[1] (Bulgarian: Вълко Велев Червенков) was a Bulgarian communist politician. He served as leader of the Communist Party between 1950 and 1954, and Prime Minister between 1950 and 1956. His rule was marked by the consolidation of the Stalinist model, rapid industrialisation, collectivisation and large-scale persecution of political opponents.

Early life and career in the Soviet Union

Chervenkov was born in Zlatitsa, Bulgaria. He became a member of the Communist Party in 1919 and participated in communist youth group activities and newspaper editing. He took part in the failed 1923 September Uprising and was sentenced to death, but was allowed to emigrate to the Soviet Union.[2]

In 1925 Chervenkov fled to the Soviet Union. He attended the Marx-Lenin school in Moscow and eventually became its director. He became a supporter of the governing style of Joseph Stalin and was known for his high wit and knowledge of the communist doctrine.[2] He was recruited as an agent in the NKVD under the alias "Spartak".[3] In 1941 Chervenkov became the director of a radio station which sent anti-German and pro-Communist messages to the Bulgarian people.

In 1944 Chervenkov returned to Bulgaria on a mission for his brother-in-law, Georgi Dimitrov. Chervenkov became a member of the government which took office soon after the end of World War II in 1945 which quickly came to be controlled by Communists. He became minister of culture in 1947, and became deputy prime minister in 1949. Shortly after becoming deputy prime minister, Bulgarian leader Georgi Dimitrov died and Bulgaria temporarily adopted a model of collective leadership. Chervenkov became general secretary of the party, and Vasil Kolarov took Dimitrov's other post of prime minister. Kolarov himself died in 1950, and Chervenkov fused the two most powerful offices in Bulgaria once again, with full Soviet approval.

Chervenkov's policies closely resembled those of the Soviet Union at the time, which earned him the nickname "Little Stalin".[1] His rule featured harsh repression of all deviation from the party line, arbitrary suppression of culture and the arts along the lines of Socialist realism, personality cult and an isolationist foreign policy. In 1950, a collectivization campaign was launched. By early 1951, Chervenkov had expelled one in five party members, including many high officials, in his campaign for complete party discipline.[4] Out of 460,000 members, 100,000 were expelled from the party by 1953.[5] Although Chervenkov's personality cult model was similar to that of Stalin, he personally accepted it only as a necessity of the current political situation and strongly opposed any extremities.[6] 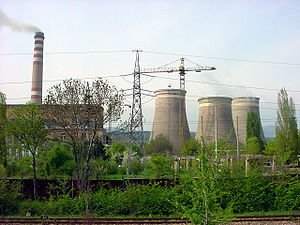 Republika Power Plant, one of the construction projects during the industrialisation

By 1953, Bulgaria had cut ties with the West and 90% of its exports and imports involved Soviet partnership.[7] Chervenkov's cabinet used intimidation and supply discrimination to increase collectivization rates. Between 1950 and 1953, state-owned arable land increased from 12% to 61%.[8] Despite these collectivization efforts, the 1949–1953 Five-Year Plan failed to achieve its target, marking −0.9% growth in agriculture for the period, although at the same time industry marked a 20.7% growth, while total economic growth amounted to 8.4%.[9]

Even before the death of Stalin, Chervenkov had already begun moving away from the Stalinist line.[10] The official approval of Dimitar Dimov's novel Tobacco marked a slight loosening of Party control over cultural activities. In 1953 relations with Greece and Yugoslavia were re-established, some political amnesties were granted, and planners discussed increasing production of consumer goods and reducing the prices of commodities. After 1953 Chervenkov was in an insecure position, and made several steps in order to gain political support – he gave up his leadership of the Party in 1954, reduced Soviet intervention in Bulgarian economic and political life, reduced the pace of collectivisation and released some 10,000 political prisoners by 1955.[10] In April 1956, following Khrushchev's de-Stalinisation, the Bulgarian Communist Party denounced Stalinism (and implicitly, Chervenkov's authoritarianism). He resigned the same year.[11] Between 1962 and 1969, his membership in the Party was suspended.