Valmiki (/vɑːlˈmiːki/;[1] Sanskrit: वाल्मीकि Vālmīki [ʋaːlmiːkɪ])[upper-alpha 1] is celebrated as the harbinger-poet in Sanskrit literature.[4] The epic Ramayana, dated variously from the 5th century BC[5][6] to first century BC,[7] is attributed to him, based on the attribution in the text itself.[8] He is revered as Ādi Kavi, the first poet, author of Ramayana, the first epic poem.

The Ramayana, originally written by Valmiki, consists of 24,000 shlokas and seven cantos (kaṇḍas).[9] The Ramayana is composed of about 480,002 words, being a quarter of the length of the full text of the Mahabharata or about four times the length of the Iliad. The Ramayana tells the story of a prince, Rama of the city of Ayodhya in the Kingdom of Kosala, whose wife Sita is abducted by Ravana, the demon-king (Asura) of Lanka. Valmiki's Ramayana is dated variously from 500 BC to 100 BC[10] or about co-eval with early versions of the Mahabharata.[11] As with many traditional epics, it has gone through a process of interpolations and redactions, making it impossible to date accurately.

British satirist Aubrey Menen says that Valmiki was "recognized as a literary genius," and thus was considered, "an outlaw," presumably because of his "philosophic scepticism,"[12] as part of an "Indian Enlightenment" period.[13] Valmiki is also quoted as being the contemporary of Rama. Menen claims Valmiki is "the first author in all history to bring himself into his own composition."[14]

Valmiki was born as Agni Sharma to a Brahmin named Pracheta (also known as Sumali) of Bhrigu gotra,[15][16] According to legend he once met the great sage Narada and had a discourse with him on his duties. Moved by Narada's words, Agni Sharma began to perform penance and chanted the word "Mara" which meant "die". As he performed his penance for several years, the word became "Rama", the name of Lord Vishnu. Huge anthills formed around Agni Sharma and this earned him the name of Valmiki. Agni Sharma, rechristened as Valmiki, learnt the scriptures from Narada and became the foremost of ascetics, revered by everyone.

There also exist some legends about Valmiki having been a thief before turning into a rishi. The Nagara Khanda of the Skanda Purana in its section on the creation of Mukhara Tirtha mentions that Valmiki was born a Brahmin, with the name of Lohajangha and was a devoted son to his parents. He had a beautiful wife and both of them were faithful to each other. Once, when there was no rain in the region of Anarta, for twelve long years, Lohajangha, for the sake of his hungry family, started robbing people that he found in the forest. In the course of this life he met the seven sages or the Saptarishi and tried to rob them as well. But the learned sages felt pity on him and showed him the folly of his ways. One of them, Pulaha gave him a Mantra to meditate upon and the Brahmin turned thief got so engrossed in its recitation that ant-hills came up around his body. When the sages returned and heard the sound of the mantra coming from the ant-hill, they blessed him and said, "Since you achieved great Siddhi seated within a Valmīka (an anthill), you will become well-known in the world as Vālmīki."[17][18] 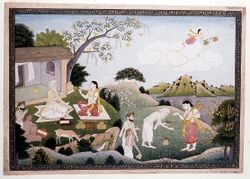 The youthful sage Narada at the white-bearded Valmiki's hermitage

Valmiki was going to the river Ganges for his daily ablutions. A disciple by the name Bharadwaja was carrying his clothes. On the way, they came across the Tamasa Stream. Looking at the stream, Valmiki said to his disciple, "Look, how clear is this water, like the mind of a good man! I will bathe here today." When he was looking for a suitable place to step into the stream, he saw a crane couple mating. Valmiki felt very pleased on seeing the happy birds. Suddenly, hit by an arrow, the male bird died on the spot. Filled by sorrow, its mate screamed in agony and died of shock. Valmiki's heart melted at this pitiful sight. He looked around to find out who had shot the bird. He saw a hunter with a bow and arrows, nearby. Valmiki became very angry. His lips opened and he cried out,

Valmiki played an important role in Uttara Kanda, the last chapter of epic Ramayana. It is believed that The Uttara Kanda was not original work of Valmiki. It is believed to be taken up from Sesha Ramayana. According to the legend Rama send Sita to forest. Sita finds refuge in Sage Valmiki's ashram, where she gives birth to twin boys Lava and Kusha. Lava and Kusha were Valmiki's first disciples to whom he taught the Ramayana. Bala Kanda of the epic also telling the story of Valmiki narrating the Ramayana to his disciples Lava and Kusha.[21] 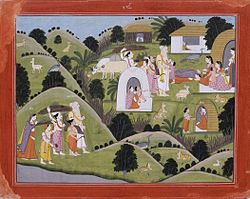 Vishnudharmottara Purana says that Valmiki was born in the Treta Yuga as a form of Brahma who composed Ramayana and that people desirious of earning knowledge should worship Valmiki.[22] He was later reincarnated as Tulsidas, who composed the Ramcharitamanas, which was the Awadhi-Hindi version of the Ramayana.[23] 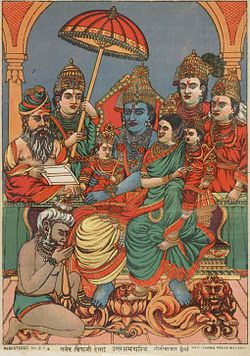 Rama with Sita on the throne, their children Lava and Kusha on their laps. Behind the throne, Lakshmana, Bharata and Shatrughna stand. Hanuman bows to Rama before the throne. Valmiki to the left.

The Balmiki sect of Hinduism reveres Valmiki, where he is also known as Lal Beg or Bala Shah, as a patron saint, with a plethora of mandirs (temples) dedicated to him.[4][24]

An area in Chennai, Tiruvanmiyur is believed to derive its name from Sage Valmiki, Thiru-Valmiki-Oor. There is a temple for Valmiki located in this place, which is believed to be 1300 years old.[25][26]

Bhatt's film which starred Suresh Oberoi in the titular role remains unreleased after a case was filed against Oberoi for remarks deemed as offensive by members of the Valmiki caste in India.[28]