From Infogalactic: the planetary knowledge core
(Redirected from Value (personal and cultural))
Jump to: navigation, search

In ethics, value denotes something's degree of importance, with the aim of determining what action of life is best to do or live (deontology), or to describe the significance of different actions (axiology). It may be described as treating actions themselves as abstract objects, putting value to them. It deals with right conduct and good life, in the sense that a highly, or at least relatively highly, valuable action may be regarded as ethically "good" (adjective sense), and an action of low, or at least relatively low, value may be regarded as "bad".[citation needed]

What makes an action valuable may in turn depend on the ethic values of the objects it increases, decreases or alters. An object with "ethic value" may be termed an "ethic or philosophic good" (noun sense).

Values can be defined as broad preferences concerning appropriate courses of action or outcomes. As such, values reflect a person's sense of right and wrong or what "ought" to be. "Equal rights for all", "Excellence deserves admiration", and "People should be treated with respect and dignity" are representative of values. Values tend to influence attitudes and behavior. Types of values include ethical/moral values, doctrinal/ideological (religious, political) values, social values, and aesthetic values. It is debated whether some values that are not clearly physiologically determined, such as altruism, are intrinsic, and whether some, such as acquisitiveness, should be classified as vices or virtues.

Ethical value is sometimes used synonymously with goodness. However, goodness has many other meanings as well, and may be regarded as more ambiguous.

Personal values exist in relation to cultural values, either in agreement with or divergence from prevailing norms. A culture is a social system that shares a set of common values, in which such values permit social expectations and collective understandings of the good, beautiful and constructive. Without normative personal values, there would be no cultural reference against which to measure the virtue of individual values and so cultural identity would disintegrate.

Personal values provide an internal reference for what is good, beneficial, important, useful, beautiful, desirable and constructive. Values generate behaviour[1] and help solve common human problems for survival by comparative rankings of value, the results of which provide answers to questions of why people do what they do and in what order they choose to do them.

Over time the public expression of personal values that groups of people find important in their day-to-day lives, lay the foundations of law, custom and tradition. Recent research has thereby stressed the implicit nature of value communication.[2] 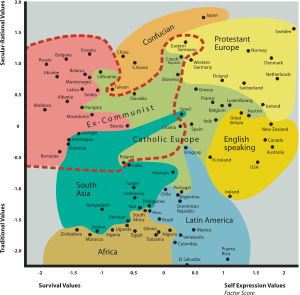 The Inglehart–Welzel cultural map of the world, constructed by sociopolitical scientists Ronald Inglehart and Christian Welzel based on the World Values Survey.

Individual cultures emphasize values which their members broadly share. One can often identify the values of a society by noting which people receive honor or respect. In the United States of America, for example, professional athletes at the top levels in some sports receive more honor (measured in terms of monetary payment) than university professors. Surveys show that voters in the United States would not willingly elect an atheist as president, suggesting belief in a God as a generally shared value.

Values relate to the norms of a culture, but they are more global and abstract than norms. Norms provide rules for behavior in specific situations, while values identify what should be judged as good or evil. While norms are standards, patterns, rules and guides of expected behavior, values are abstract concepts of what is important and worthwhile. Flying the national flag on a holiday is a norm, but it reflects the value of patriotism. Wearing dark clothing and appearing solemn are normative behaviors to manifest respect at a funeral. Different cultures reflect values differently and to different levels of emphasis. "Over the last three decades, traditional-age college students have shown an increased interest in personal well-being and a decreased interest in the welfare of others."[3] Values seemed to have changed, affecting the beliefs, and attitudes of the students.

Members take part in a culture even if each member's personal values do not entirely agree with some of the normative values sanctioned in that culture. This reflects an individual's ability to synthesize and extract aspects valuable to them from the multiple subcultures they belong to.

If a group member expresses a value that seriously conflicts with the group's norms, the group's authority may carry out various ways of encouraging conformity or stigmatizing the non-conforming behavior of that member. For example, imprisonment can result from conflict with social norms that the state has established as law.[clarification needed]

Furthermore, institutions in the global economy can genuinely respect values which are of three kinds based on a "triangle of coherence".[4] In the first instance, a value may come to expression within the World Trade Organization (WTO), as well as (in the second instance) within the United Nations - particularly in the Educational, Scientific and Cultural Organization (UNESCO) - providing a framework for global legitimacy through accountability. In the third instance, the expertise of member-driven international organizations and civil society depends on the incorporation of flexibility in the rules, to preserve the expression of identity in a globalized world.[5]

Nonetheless, in warlike economic competition, differing views may contradict each other, particularly in the field of culture. Thus audiences in Europe may regard a movie as an artistic creation and grant it benefits from special treatment, while audiences in the United States may see it as mere entertainment, whatever its artistic merits. EU policies based on the notion of "cultural exception" can become juxtaposed with the policy of "cultural specificity" on the liberal Anglo-Saxon side. Indeed, international law traditionally treats films as property and the content of television programs as a service.[citation needed] Consequently, cultural interventionist policies can find themselves opposed to the Anglo-Saxon liberal position, causing failures in international negotiations.[6]

Values are generally received through cultural means, especially transmission from parents to children. Parents in different cultures have different values.[7] For example, parents in a hunter–gatherer society or surviving through subsistence agriculture value practical survival skills from a young age. Many such cultures begin teaching babies to use sharp tools, including knives, before their first birthdays.[8] Italian parents value social and emotional abilities and having an even temperament.[7] Spanish parents want their children to be sociable.[7] Swedish parents value security and happiness.[7] Dutch parents value independence, long attention spans, and predictable schedules.[7] American parents are unusual for strongly valuing intellectual ability, especially in a narrow "book learning" sense.[7] The Kipsigis people of Kenya value children who are not only smart, but who employ that intelligence in a responsible and helpful way, which they call ng'om. Luos of Kenya value education and pride which they call "nyadhi".[7]

The reception of values can be regarded as a part of socialization.

Relative values differ between people, and on a larger scale, between people of different cultures. On the other hand, there are theories of the existence of absolute values,[9] which can also be termed noumenal values (and not to be confused with mathematical absolute value). An absolute value can be described as philosophically absolute and independent of individual and cultural views, as well as independent of whether it is known or apprehended or not. Ludwig Wittgenstein was pessimistic towards the idea that an elucidation would ever happen regarding the absolute values of actions or objects; "we can speak as much as we want about "life" and "its meaning," and believe that what we say is important. But these are no more than expressions and can never be facts, resulting from a tendency of the mind and not the heart or the will".[10]

Intrinsic and instrumental goods are not mutually exclusive categories.[11] Some objects are both good in themselves, and also good for getting other objects that are good. "Understanding science" may be such a good, being both worthwhile in and of itself, and as a means of achieving other goods. In these cases, the sum of instrumental (specifically the all instrumental value) and instrinsic value of an object may be used when putting that object in value systems, which is a set of consistent values and measures.

The intensity of philosophic value is the degree it is generated or carried out, and may be regarded as the prevalence of the good, the object having the value.[11]

It should not be confused with the amount of value per object, although the latter may vary too, e.g. because of instrumental value conditionality. For example, taking a fictional life-stance of accepting waffle-eating as being the end-in-itself, the intensity may be the speed that waffles are eaten, and is zero when no waffles are eaten, e.g. if no waffles are present. Still, each waffle that had been present would still have value, no matter if it was being eaten or not, independent on intensity.

Instrumental value conditionality in this case could be exampled by every waffle not present, making them less valued by being far away rather than easily accessible.

In many life stances it is the product of value and intensity that is ultimately desirable, i.e. not only to generate value, but to generate it in large degree. Maximizing lifestances have the highest possible intensity as an imperative.