The Van Allen Probes (formerly known as the Radiation Belt Storm Probes[1] (RBSP)) are two robotic spacecraft being used to study the Van Allen radiation belts that surround Earth. NASA is conducting the Van Allen Probes mission as part of the Living With a Star program.[2] Understanding the radiation belt environment and its variability has important practical applications in the areas of spacecraft operations, spacecraft system design, mission planning and astronaut safety.[3] The probes were launched on August 30, 2012.

NASA's Goddard Space Flight Center manages the overall Living With a Star program of which RBSP is a project, along with Solar Dynamics Observatory (SDO). The Applied Physics Laboratory is responsible for the overall implementation and instrument management for RBSP. The primary mission is scheduled to last 2 years, with expendables expected to last for 4 years. The spacecraft will also work in close collaboration with the Balloon Array for RBSP Relativistic Electron Losses (BARREL), which can measure particles that break out of the belts and make it all the way to Earth's atmosphere.[4][5]

The Radiation Belt Storm Probes mission is part of NASA’s Living With a Star program, which is managed by Goddard Space Flight Center in Greenbelt. The Johns Hopkins University Applied Physics Laboratory (APL) manages the mission and is building and will operate the Van Allen Probes for NASA.

On March 16, 2009 United Launch Alliance (ULA) announced that NASA had awarded ULA a contract to launch RSBP using an Atlas V 401 rocket.[8] NASA delayed the launch as it counted down to the four-minute mark early morning on August 23. After bad weather prevented a launch on August 24, and a further precautionary delay to protect the rocket and satellites from Hurricane Isaac, liftoff occurred on August 30, 2012 at 4:05 AM EDT.[9]

The Van Allen radiation belts swell and shrink over time as part of a much larger space weather system driven by energy and material that erupt off the Sun's surface and fill the entire Solar System. Space weather is the source of aurora that shimmer in the night sky, but it also can disrupt satellites, cause power grid failures and disrupt GPS communications. The Van Allen Probes will help scientists to understand this region and to better design spacecraft that can survive the rigors of outer space.[2] The mission is to gain scientific understanding of how populations of relativistic electrons and ions in space form or change in response to changes in solar activity and the solar wind.[2]

The mission's general scientific objectives are to:[2] 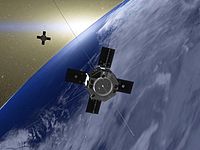 Artist's rendition of Van Allen Probes A and B in Earth orbit. Credit:NASA

The Van Allen Probes consists of two spin-stabilized spacecraft that were launched with a single Atlas V rocket. The two probes must operate in the harsh conditions they are studying; while other satellites have the luxury of turning off or protecting themselves in the middle of intense space weather, the Van Allen Probes must continue to collect data. The probes have, therefore, been built to withstand the constant bombardment of particles and radiation they will experience in this intense area of space.[2]

Because it is vital that the two craft make identical measurements to observe changes in the radiation belts through both space and time, each probe will carry the following: