Varna Province (Bulgarian: Област Варна, Oblast Varna, former name Varna okrug) is a province in northeastern Bulgaria, onе of the 28 Bulgarian provinces. It comprises 12 municipalities (общини, obshtini, sing. общинa, obshtina) with a population, in December 2009, of 465,465 inhabitants.[2][3][4] The province is named after its administrative centre: the city of Varna. 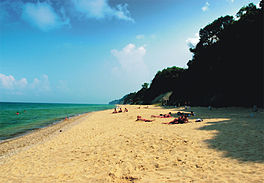 The province's territory is 3,819.5 square kilometres.[1] It borders the Black Sea and covers parts of the hilly Danubian Plain (including parts of the Franga Plateau, South Dobruja, the Provadiya Plateau, Ludogorie, and the Avren Plateau), Eastern Stara Planina, the Varna–Devnya valley with the lakes (limans) of Varna and Beloslav, and the Kamchiya river valley. Other rivers include Provadiya, Devnya, and Batova, and the largest artificial lake is Tsonevo.

The Black Sea coast is hilly and verdant, mostly cliff, with a couple of rocky headlands (Cape Galata, Cape St. Athanasius), several expansive sand beaches, the largest of which, at the mouths of the rivers Kamchiya and Shkorpilovska, is nearly 13 km long and up to 200–300 m wide, and many small cove beaches. Agricultural lands cover 60% of the area, with fertile chernozem soils mostly in the north and west; forests—28.1% (with some of the oldest oak massives in the nation), mostly in the south; and urban zones—6.8%.

Natural resources include large deposits of rock salt, limestone, silica, and clays, all extensively used in local chemical, cement and glass manufacturing and construction; silica is also exported. Significant deposits of medicinal fango (mineral mud) are found in Lake Varna. The province abounds in thermal mineral waters. There are natural gas reserves. The offshore Galata gas field, a relatively minor project with planned cumulative production of 2 billion cubic meters, is expected to provide up to 15% of the nation's gas consumption for its lifetime. Manganese ore deposits are found.

The climate inland is temperate, with cold, damp winters and hot, dry summers, and akin to Mediterranean along the Black Sea coast, with milder winters and cooler summers. 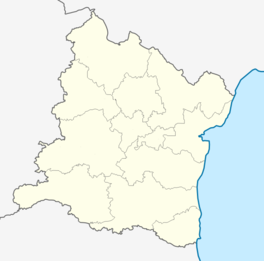 The Varna province (oбласт, oblast) contains 12 municipalities (Bulgarian: singular: oбщина, obshtina, plural: oбщини, obshtini). The following table shows the names of each municipality in English and Cyrillic, the main town (in bold) or village, and the population of each in December 2009.

The following table represents the change of the population in the province after World War II:

A further 50 000 persons in Varna Province did not declare their ethnic group at the 2011 census.

Ethnic groups according to the 2001 census, when 462 013 people of the population of 462,013 of Varna Province identified themselves (with percentage of total population):[11]

The ethnic composition at the 2001 census included Bulgarians—85.3%; Turks—8.1%; Roma (Gypsy)—3.4% (there are a few mostly Roma-populated villages such as Lyuben Karavelovo in Aksakovo municipality—inhabited by Vlach Gypsies of the Kopanari subgroup); Armenians—0.6%; Russians—0.3% (including about 340 Cossacks in the Lipovan village of Kazashko); and smaller numbers of Ukrainians, Jews, Greeks, Crimean Tatars, Circassians, Vlachs, and others. There is a growing number of western expatriates and new Chinese, Arab and other immigrants.

Several rural villages in the municipalities of Aksakovo, Suvorovo, and Valchidol, as well as the Vinitsa district of Varna, have historically been populated mostly by Gagauz.

Religious adherence in the province according to 2001 census:[12] 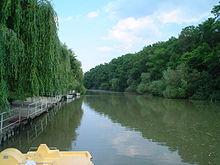 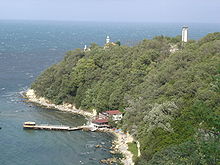 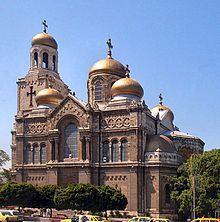 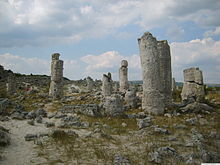 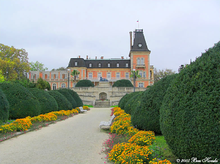 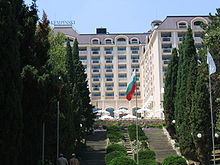 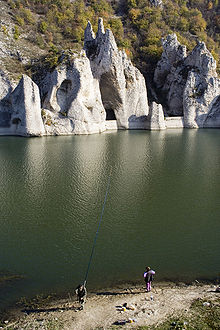 The area has been populated at least since the Neolith and was a major centre of an Eneolithic culture with unique skills in metallurgy and seafaring, with a developed social structure and religion (see Varna Necropolis, site of arguably the oldest man-made gold treasure in the world). Solnitsata, the earliest known European town, was in what is today Varna Province.[13]

By the first millennium BC, it was inhabited by Thracians who dominated it throughout classical antiquity; by the end of the period they were largely Romanized. In the 6th century BC, an ancient Greek trading colony (apoikia), Odessos (Varna), was founded, becoming an enduring contact zone between Thracians and Greeks. In the 4th century, the province was included in the empire of Philip II, Alexander the Great and his diadochus Lysimachus.

By the first century AD, it was conquered by the Roman Empire. Under Emperor Diocletian, Marcianopolis (Devnya) became the centre of the Roman province of Moesia Secunda of the Diocese of Thrace. During Emperor Valens' wars with the Goths (366-369), this city was temporary capital of the empire. Both Marcianopolis and Odessus (the Roman name of Odessos) were major early Christian centres. It is believed that Saint Andrew founded the local Christian church and his disciple Ampliatus served as bishop at Odessus.

In the 6th century, Slavs' migrations altered the ethnic composition of the then Byzantine province. In 680-681 it became the heartland of the First Bulgarian Empire, whose capital was perhaps initially near Varna, before it moved to Pliska. Two of the most significant scriptoria of the Preslav Literary School were at Ravna (near Provadiya) and Varna.

The latter two cities were major fortresses and trade emporia of the Second Bulgarian Empire as well. The peasant war of Ivailo in the late 13th century started from the region, which at the time was plagued by Tatar raids and was finally subdued by the Ottomans in 1389. In 1444, the Battle of Varna was fought, as were several ground and naval battles of the Russo-Turkish wars of the 18th and 19th century.

Under the Ottomans, the population became extremely diverse, with significant number of Turks and other Muslim peoples arriving from Asia Minor, the steppes north of the Black Sea, and the Caucasus, along with Orthodox Christian Gagauz, Armenians, and Sephardic Jews from Thessaloniki. Many Bulgarians from the region were forcibly relocated to Asia Minor and, in the wake of the Russo-Turkish wars, up to 250,000 eastern Bulgarians were transferred to Russian Bessarabia and Crimea.

After the liberation of 1878, with the exodus of most Turks and Greeks and the migrations of Bulgarians from other parts of Bulgaria, mostly Stara Planina, as well as North Dobruja, Asia Minor, Bessarabia, and later from Macedonia and Eastern Thrace, ethnic diversity gradually gave way to Bulgarian predominance.

One of the versions of a folk song, inspired by the Ruse blood wedding, can be heard in the province.

The province is second only to Sofia in foreign direct investment; its GDP per capita is higher and its unemployment is the lowest in the country. Per capita income is fifth highest in the nation (2007). The economy is service-oriented; it was responsible for over 30% of the nation's revenue in tourism (2004). (See the list of coastal resorts, beaches, and locales below.)

It is an important communications and transportation hub with the Port of Varna on the Black Sea and inland waterways, the International Airport of Varna, the Varna railway ferry terminal, parts of several railway lines (including the oldest one in Bulgaria, Rousse-Varna, opened 1866) and junctions (Sindel, Razdelna, Komunari), and portions of two of the nation's motorways (Haemus and Cherno More). Varna is the easternmost destination of Pan-European transport corridor 8 and is closely connected to corridors 7 and 9 via Rousse.

Manufacturing is concentrated mostly in the Varna-Devnya Industrial Complex and Provadiya. Agriculture (notably wheat, fruit, wineries) and forestry are also of economic significance.

Real estate has been booming over the last few years[when?] in Varna and rural villages near the coast and inland. "English villages" of Britons settling in Bulgaria emerged in the rural countryside at Avren, Banovo (municipality of Suvorovo), and General Kantardzhievo (municipality of Aksakovo), among others.

Varna is Bulgaria's third largest city, after Sofia and Plovdiv. The oldest gold (dated 4200-4600 BC) in the world was found near the city. It was an inhabited place long before the Greeks established the colony of Odessos there about 580 BC. Later, under the Romans and their successors, the Slavs and Bulgarians, Varna became a major port trading with Constantinople, Venice and Dubrovnik.

In 1393 it was captured by the Turks, who made it an important military centre. Nowadays it is the nation's main port for both naval and commercial shipping and, adjacent as it is to the coastal resorts of Constantine and Helena, Riviera, Golden Sands, and Kamchia. Sailors on shore-leave in unfamiliar ceremonial uniforms, mingle with foreign tourists and locals as they promenade along shady boulevards, lined by dignified 19th and early 20th century buildings.

The 19th century Dormition of the Theotokos Cathedral is an imposing landmark, which contains a finely carved iconostasis and bishop's throne, some interesting murals and stained glass.

The 2nd century Thermae are the remains of the largest Roman public building in Bulgaria. During this century enough has been revealed by archaeologists to give a good impression of the original layout, though some parts of the building remain hidden under nearby streets. Coming across an extensive ancient building amidst the streets and houses of a modern city is not unusual in Bulgaria and is a delight.

Further from the centre, a monument commemorates the Battle of Varna, which took place in 1444. Here 30,000 crusaders were waiting to sail to Constantinople when they were attacked by 120,000 Turks. The Polish King Ladislaus III was killed in a bold attempt to capture Sultan Murad II. The subsequent retreat foreshadowed Christendom's general retreat before the advancing Ottomans. North of Varna there is a cluster of seaside resorts all with fine sandy beaches but differing in size and style.

Some other places of interest include (by municipality):