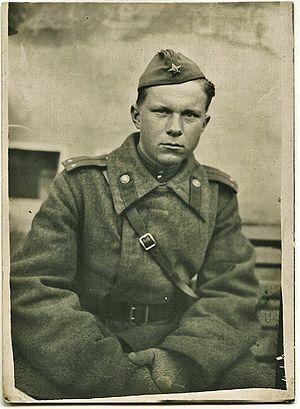 Vasil Uładzimiravič Bykaŭ (often spelled Vasil Bykov, Belarusian: Васі́ль Уладзі́міравіч Бы́каў, Russian: Василь Влади́мирович Быков) (June 19, 1924 – June 22, 2003) was a prolific author of novels and novellas about World War II, is a monumental figure in Belarusian literature and civic thought. The writer's talent and the moral courage that permeates his writings earned him endorsements for the Nobel Prize nomination from, among others, Nobel Prize laureates Joseph Brodsky and Czesław Miłosz.

Vasil Bykaŭ was born in the village Byčki, not far from Viciebsk in 1924. In 1941 he was in Ukraine when Germany attacked the USSR. At first seventeen-year-old Bykaŭ dug trenches – then he volunteered for the Red Army. He was arrested and almost shot as a German spy.[1] For years after the war he continued to serve, returning to the USSR only in the mid-1950s. There he started to work as a journalist for the Hrodna Pravda newspaper. In that same decade his first novellas began to come out, of which the most famous are "Sotnikaŭ", "The Obelisk", "To Go and Not Return", and "To Live Till Sunrise". During and after the Perestroika, he participated in pro-reform movement (e.g. Popular Front of Belarus). In October 1993, he signed the Letter of Forty-Two.[2]

Bykaŭ's literary achievement lies in his sternly realistic, albeit touched by lyricism, depictions of World War II battles, typically with a small number of personages. In the ferociousness of encounter they face moral dilemmas both vis-a-vis their enemies and within their own Soviet world burdened by ideological and political constraints. Bykaŭ's novellas that are available in English translation, such as "The Dead Feel No Pain" (1965), "The Ordeal" (1970), "Wolf Pack" (1975) and "Sign of Misfortune", challenged the official version of the war. This brought upon the writer vicious accusations of "false humanism" from some Red Army generals and the Communist Party press. "Vasil Bykov is a very courageous and uncompromising writer, rather of the Solzhenitsyn stamp," wrote Michael Glenny in Partisan Review in 1972. Bykaŭ was one of the most admired writers in the Soviet Union. In 1980 he was awarded the honorific title of People's Writer of the Belarusian SSR.

Outside of his native country, Vasil Bykaŭ is the most widely read Belarusian writer.[citation needed] During the Soviet period, his works were translated into most major languages of the world.[citation needed] However, most of the translations were done on the basis of Russian rendering. Bykaŭ wrote all of his works in his native Belarusian language, and translated several of them into Russian by himself. Vasil Bykaŭ's stature in the life of his country remains enormous. An opponent of Alexander Lukashenko's regime and a supporter of the Belarusian People's Front, he lived abroad for several years (first in Finland, then in Germany and the Czech Republic), but returned to his homeland just a month before his death. The memory of his turbulent life and uncompromising stance on the war have only enhanced his reputation at home and abroad ever since.