Vasily Pavlovich Aksyonov (Russian: Васи́лий Па́влович Аксёнов; IPA: [vɐˈsʲilʲɪj ˈpavləvʲɪtɕ ɐˈksʲɵnəf]; August 20, 1932 – July 6, 2009) was a Soviet and Russian novelist. He is known in the West as the author of The Burn (Ожог, Ozhog, from 1975) and Generations of Winter (Московская сага, Moskovskaya Saga, from 1992), a family saga depicting three generations of the Gradov family between 1925 and 1953.

Vasily Aksyonov was born to Pavel Aksyonov and Yevgenia Ginzburg in Kazan, USSR on August 20, 1932. His mother, Yevgenia Ginzburg, was a successful journalist and educator and his father, Pavel Aksyonov, had a high position in the administration of Kazan. Both parents "were prominent communists."[2][3] In 1937, however, both were arrested and tried for her alleged connection to Trotskyists. They were both sent to Gulag and then to exile, and "each served 18 years, but remarkably survived."[2] "Later, Yevgenia came to prominence as the author of a famous memoir, Into the Whirlwind, documenting the brutality of Stalinist repression."[2]

Aksyonov remained in Kazan with his nanny and grandmother until the NKVD arrested him as a son of "enemies of the people", and sent him to an orphanage without providing his family any information on his whereabouts.[2] Aksyonov "remained [there] until rescued in 1938 by his uncle, with whose family he stayed until his mother was released into exile, having served 10 years of forced labour."[2] "In 1947, Vasily joined her in exile in the notorious Magadan, Kolyma prison area, where he graduated from high school."[2] Vasily's half-brother Alexei (from Ginzburg's first marriage to Dmitriy Fedorov) died from starvation in besieged Leningrad in 1941.[1]

His parents, seeing that doctors had the best chance to survive in the camps, decided that Aksyonov should go into the medical profession.[2] "He therefore entered the Kazan University and graduated in 1956 from the First Pavlov State Medical University of St. Peterburg" and worked as a doctor for the next 3 years.[2] During his time as a medical student he came under surveillance by the KGB, who began to prepare a file against him. It is likely that he would have been arrested had the liberalisation that followed Stalin's death in 1953 not intervened.[1]

Reportedly, "during the liberalisation that followed Stalin's death in 1953, Aksyonov came into contact with the first Soviet countercultural movement of zoot-suited hipsters called stilyagi (the ones 'with style')."[2] As a result,

He fell in love with their slang, fashions, libertine lifestyles, dancing and especially their music. From this point on began his lifelong romance with jazz. Interest in his new milieu, western music, fashion and literature turned out to be life-changing for Aksyonov, who decided to dedicate himself to chronicling his times through literature. He remained a keen observer of youth, with its ever-changing styles, movements and trends. Like no other Soviet writer, he was attuned to the developments and changes in popular culture.[2]

In 1956, he was "discovered" and heralded by the Soviet writer Valentin Kataev for his first publication, in the liberal magazine Youth.[2] "His first novel, Colleagues (1961), was based on his experiences as a doctor."[2] "His second, Ticket to the Stars (1961), depicting the life of Soviet youthful hipsters, made him an overnight celebrity."[2]

In the 1960s Aksyonov was a frequent contributor to the popular Yunost ("Youth") magazine and eventually became a staff writer. Aksyonov thus reportedly became "a leading figure in the so-called "youth prose" movement and a darling of the Soviet liberal intelligentsia and their western supporters: his writings stood in marked contrast to the dreary, socialist-realist prose of the time."[2] "Aksyonov's characters spoke in a natural way, using hip lingo, they went to bars and dance halls, had premarital sex, listened to jazz and rock'n'roll and hustled to score a pair of cool American shoes."[2] "There was a feeling of freshness and freedom about his writings, similar to the one emanating from black-market recordings of American jazz and pop."[2] "He soon became one of the informal leaders of the Shestidesyatniki – which translates roughly as "the '60s generation" – a group of young Soviets who resisted the Communist Party's cultural and ideological restrictions."[4] "'It was amazing: We were being brought up robots, but we began to listen to jazz,' Aksyonov said in a 2007 documentary about him."[4]

For all his hardship, Aksyonov,

as a prose stylist, was at the opposite pole from Mr. Solzhenitsyn, becoming a symbol of youthful promise and embracing fashion and jazz rather than dwelling on the miseries of the gulag. Ultimately, however, he shared Mr. Solzhenitsyn's fate of exile from the Soviet Union.

Solzhenitsyn is all about the imprisonment and trying to get out, and Aksyonov is the young person whose mother got out and he actually can live his life now, said Nina L. Khrushcheva, who is a granddaughter of Nikita Khrushchev and a friend of the Aksyonov family and who teaches international affairs at the New School in New York. It was important to have the Aksyonov light, that light of personal freedom and personal self-expression.[3]

However, Aksyonov's "open pro-Americanism and liberal values eventually led to problems with the KGB."[2] "And his involvement in 1979 with an independent magazine, Metropol, led to an open confrontation with the authorities."[2][4] His next two celebrated dissident novels, The Burn and The Island of Crimea, could not be published in the USSR.[2] "The former explored the plight of intellectuals under communism and the latter was an imagining of what life might have been like had the white army staved off the Bolsheviks in 1917."[2]

"When The Burn was published in Italy in 1980, Aksyonov accepted an invitation for him and his wife Maya to leave Russia for the US."[2] "Soon afterwards, he was stripped of his Soviet citizenship, regaining it only 10 years later during Gorbachev's perestroika."[2]

"Aksyonov spent the next 24 years in Washington, D.C. and Virginia, where he taught Russian Literature at George Mason University."[2][3] "He [also] taught literature at a number of [other] American universities, including USC and Goucher College in Maryland... [and] worked as a journalist for Radio Liberty."[4]

"He continued to write novels, among which was the ambitious Generations of Winter (1994), a multi-generational saga of Soviet life that became a successful Russian TV mini-series."[2] The so-called "The Moscow Saga, [this 1994] epic trilogy... described the lives of three generations of a Soviet family between the 1917 Bolshevik Revolution and Stalin's death in 1953."[4] The TV mini-series consisted of 24 episodes and was broadcast on Russian television in 2004.[4] "[In 1994], he also won the Russian Booker Prize, Russia's top literary award, for his historical novel Voltairian Men and Women, about a meeting between the famous philosopher Voltaire and Empress Catherine II."[4] 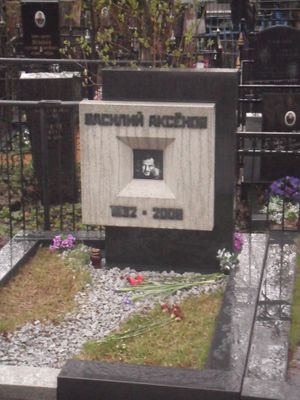 Grave of Vasily Aksyonov in Moscow

"In 2004, he settled in Biarritz, France, and returned to the US less frequently, dividing his time between France and Moscow."[2] His novel Moskva-kva-kva (2006) was published in the Moscow-based magazine Oktyabr.

"Aksyonov was translated into numerous languages, and in Russia remained influential.".[2] In addition to writing novels, he is also known as author of poems, occasionally performed as songs.[5] He was reportedly "forever a hipster [and] was used to being in the avant garde, be it in fashion or literary innovation."[2] He was described as "a colourful man, with his trademark moustache, elegant suits, expensive cars, and a love for grand cities, fine wine and good food."[2]

Vasily Aksyonov was a convinced anti-totalitarian. On the presentation of one of his last novels, he stated: "If in this country one starts erecting Stalin statues again, I have to reject my native land. Nothing else remains."[6]

His other novels include: