Vasily Semyonovich Grossman (Russian: Васи́лий Семёнович Гро́ссман, Ukrainian: Василь Семенович Гроссман; 12 December 1905 – 14 September 1964) was a Soviet Russian writer and journalist. Grossman was trained as an engineer and worked in the Donets Basin, but changed his career in the 1930s and published short stories and several novels. At the outbreak of the Second World War, he became a war correspondent for the Red Army newspaper Krasnaya Zvezda, writing firsthand accounts of the battles of Moscow, Stalingrad, Kursk and Berlin. Grossman's eyewitness accounts of conditions in a Nazi extermination camp, following the liberation of Treblinka, were among the earliest. Grossman also translated Armenian literature into Russian, despite the fact that (as he writes in 'Dobro Vam!',—the account of a sojourn in Armenia in the early 1960s, during which he worked at the translation of a book by a local writer called Martirosjan) he lacked the ability to read Armenian, and worked on an interlinear translation made for him by a third person.

After World War II, Grossman's faith in the Soviet state was shaken by Joseph Stalin's turn towards antisemitism in the final years before his death in 1953. While Grossman was never arrested by the Soviet authorities, his two major literary works (Life and Fate and Forever Flowing) were censored during the ensuing Nikita Khrushchev period as unacceptably anti-Soviet, and Grossman himself became in effect a nonperson. The KGB raided Grossman's flat after he had completed Life and Fate, seizing manuscripts, notes and even the ribbon from the typewriter on which the text had been written. Grossman was told by the Communist Party's chief ideologist Mikhail Suslov that the book could not be published for two or three hundred years. At the time of Grossman's death from stomach cancer in 1964, these books were unreleased. Copies were eventually smuggled out of the Soviet Union by a network of dissidents, including Andrei Sakharov and Vladimir Voinovich, and first published in the West, before appearing in the Soviet Union in 1988.

Born Iosif Solomonovich Grossman in Berdychiv, Russian Empire (today in Ukraine) into an emancipated Jewish family, he did not receive a traditional Jewish education. A Russian nanny turned his name Yossya into Russian Vasya (a diminutive of Vasily), which was accepted by the whole family. His father had social-democratic convictions and joined the Mensheviks. Young Vasily Grossman idealistically supported the Russian Revolution of 1917.

Grossman began writing short stories while studying at Moscow State University and later continued his literary activity working as an engineer in the Donbass. One of his first short stories, "In the Town of Berdichev" (В городе Бердичеве), drew favourable attention and encouragement from Maxim Gorky and Mikhail Bulgakov. The film Commissar (director Aleksandr Askoldov), made in 1967, suppressed by the KGB and released only in October 1990, is based on this four-page story.

In the mid-1930s Grossman left his job as an engineer and committed himself fully to writing. By 1936 he had published two collections of stories and the novel Glyukauf, and in 1937 was accepted into the privileged Union of Writers. His novel Stepan Kol'chugin (published 1937-40) was nominated for a Stalin prize but deleted from the list by Stalin himself for alleged Menshevik sympathies.[1]

Grossman's first marriage had ended in 1933 and in the summer of 1935 he had begun an affair with the wife of his friend, writer Boris Guber, Olga Mikhailovna. Grossman and Olga Mikhailovna had begun living together in October 1935, and they had married in May 1936, a few days after Olga Mikhailovna and Boris Guber had divorced. In 1937 during the Great Purge Boris Guber was arrested and later Olga Mikhailovna was also arrested for failing to denounce her previous husband as an "enemy of the people". Grossman quickly had himself registered as the official guardian of Olga's two sons by Boris Guber, thus saving them from being sent to orphanages. He then wrote to Nikolay Yezhov, the head of the NKVD, pointing out that Olga Mikhailovna was now his wife, not Guber's, and that she should not be held responsible for a man from whom she had separated long before his arrest. Grossman's friend, Semyon Lipkin, has commented, "In 1937 only a very brave man would have dared to write a letter like this to the State's chief executioner." Astonishingly, Olga Mikhailovna was released.[2]

When Nazi-Germany invaded the Soviet Union in 1941, Grossman's mother was trapped in Berdychiv by the invading German Army, and eventually murdered together with 20,000 to 30,000 other Jews who had not evacuated. Grossman was exempt from military service, but volunteered for the front, where he spent more than 1,000 days. He became a war correspondent for the popular Red Army newspaper Krasnaya Zvezda (Red Star). As the war raged on, he covered its major events, including the Battle of Moscow, the Battle of Stalingrad, the Battle of Kursk and the Battle of Berlin. In addition to war journalism, his novels (such as The People are Immortal (Народ бессмертен)) were being published in newspapers and he came to be regarded as a legendary war hero. The novel Stalingrad (1950), later renamed For a Just Cause (За правое дело), is based on his own experiences during the siege.

Grossman described Nazi ethnic cleansing in German occupied Ukraine and Poland, and the liberation by the Red Army of the Nazi-German Treblinka and Majdanek extermination camps. He collected some of the first eyewitness accounts — as early as 1943 — of what later became known as the Holocaust. His article The Hell of Treblinka[3] (1944) was disseminated at the Nuremberg Trials as evidence for the prosecution.

Conflict with the Soviet regime

Grossman participated in the assembly of the Black Book, a project of the Jewish Anti-Fascist Committee to document the crimes of the Holocaust. The post-war suppression of the Black Book by the Soviet state shook him to the core, and he began to question his own loyal support of the Soviet regime. First the censors ordered changes in the text to conceal the specifically anti-Jewish character of the atrocities and to downplay the role of Ukrainians who worked with the Nazis as police. Then, in 1948, the Soviet edition of the book was scrapped completely. The poet Semyon Lipkin, Grossman's friend, believed it was Joseph Stalin's post-war antisemitic campaign that cracked Grossman's belief in the Soviet system:

In 1946... I met some close friends, an Ingush and a Balkar, whose families had been deported to Kazakhstan during the war. I told Grossman and he said: "Maybe it was necessary for military reasons." I said: "...Would you say that if they did it to the Jews?" He said that could never happen. Some years later, a virulent article against cosmopolitanism appeared in Pravda. Grossman sent me a note saying I had been right after all. For years Grossman didn't feel very Jewish. The campaign against cosmopolitanism reawoke his Jewishness.

Grossman also criticized collectivization and political repression of peasants that led to the Holodomor tragedy. He wrote that "The decree about grain procurement required that the peasants of the Ukraine, the Don and the Kuban be put to death by starvation, put to death along with their little children."[4]

Because of state persecution, only a few of Grossman's post-war works were published during his lifetime. After he submitted for publication his magnum opus, the novel Life and Fate (Жизнь и судьба, 1959), the KGB raided his flat. The manuscripts, carbon copies, notebooks, as well as the typists' copies and even the typewriter ribbons were seized. The Politburo ideology chief Mikhail Suslov told Grossman that his book could not be published for two or three hundred years:[5]

I have not read your novel but I have carefully read the reviews of your manuscript, responses to it, which contain many excerpts from your novel. Look how many quotes from them I have written down.... Why should we add your book to the atomic bombs that our enemies are preparing to launch against us?... Why should we publish your book and begin a public discussion as to whether anyone needs the Soviet Union or not?[6]

Grossman wrote to Nikita Khrushchev: "What is the point of me being physically free when the book I dedicated my life to is arrested... I am not renouncing it... I am requesting freedom for my book." However, Life and Fate and his last major novel, Everything Flows (Все течет, 1961) were considered a threat to the Soviet power; these novels were suppressed and the dissident writer effectively transformed into a nonperson. Grossman died of stomach cancer in 1964, not knowing whether his major novels would ever be read by the public. 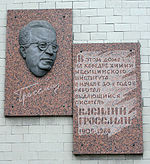 Memorial plaque in Donetsk where Grossman worked in the early 1930s.

Life and Fate was published in 1980 in Switzerland, thanks to fellow dissidents: physicist Andrei Sakharov secretly photographed draft pages preserved by Semyon Lipkin, and the writer Vladimir Voinovich managed to smuggle the photographic films abroad. Two dissident researchers, professors and writers, Efim Etkind and Shimon Markish retyped the text from the microfilm, with some mistakes and misreadings due to the bad quality. The book was finally published in the Soviet Union in 1988 after the policy of glasnost was initiated by Mikhail Gorbachev. The text was published again in 1989, because further original manuscripts emerged after the first publication. Everything Flows was also published in the Soviet Union in 1989.

Life and Fate is considered to be in part an autobiographical work. Robert Chandler, the novel's English translator, has written in his introduction to the Harvill edition that its leading character, Viktor Shtrum, "is a portrait of the author himself," reflecting in particular his anguish at the murder of his mother at the Berdichev Ghetto. Chapter 18, a letter from Shtrum's mother, Anna, has been dramatized for the stage and film The Last Letter (2002), directed by Frederick Wiseman, and starring Catherine Samie. Chandler additionally suggests that aspects of the character and experience of Shtrum are based on the physicist Lev Landau. The late novel Everything Flows, in turn, is especially noted for its quiet, unforced, and yet horrifying condemnation of the Soviet totalitarian state: a work in which Grossman, liberated from worries about censors, spoke honestly about Soviet history.

Some critics have compared Grossman's novels to the work of Leo Tolstoy.[7][8]