From Infogalactic: the planetary knowledge core
Jump to: navigation, search
This name uses Eastern Slavic naming customs; the patronymic is Filippovich and the family name is Margelov.

Author Carey Schofield wrote that Margelov "...is considered to be the real father of the VDV...[leading]...them through their most vital period of development."[4]

Vasily Markelov (later Margelov) was born on 27 December 1908 in the city of Ekaterinoslav, the son of Belarusian immigrants.[5] His father, Filipp Markelov, was a metallurgist. In 1913, the Markelov family returned to Belarus and settled in the town of Kastsyukovichy. His mother, Agata Stepanovna, came from the neighboring Bobruisk district. According to some, Margelov graduated from the parish school in 1921.[6] As a teenager, he worked as a loader and a carpenter. In the same year, he became an apprentice in a tanning shop and soon became an assistant master. In 1923, Margelov became a laborer in a local bakery. There is some evidence that Margelov graduated from the School of Rural Youth[7] and worked as a forwarder in local mail delivery.[6]

From 1924, Margelov worked in the Kalinin mine at Ekaterinoslav. In 1925, he returned to Belarus and worked as a forester in the timber industry in Kostiukovichi. In 1927, he became the chairman of the working committee of the timber industry and was elected to the local council.[8]

From 25 October 1938, Margelov commanded the 2nd Battalion of the 23rd Rifle Regiment of the 8th Rifle Division. As part of the divisional staff, he participated in the Soviet invasion of Poland.[8]

During the Winter War, Margelov commanded a separate ski reconnaissance battalion in the 596th Rifle Regiment of the 122nd Rifle Division. During one raid on the Finnish rear area, he reportedly captured a group of Swedish volunteers. During the war, Margelov was wounded.[8] After the end of the Winter War, Margelov was appointed assistant commander of the 596th Rifle Regiment. In October 1940, he became the commander of the 15th Separate Disciplinary Battalion of the Leningrad Military District.[8]

In January 1943, Margelov became the 3rd Guards Rifle Division's deputy commander. He participated in the Salak-Rostov Offensive during the same month. Margelov also fought in the Donbass Strategic Offensive and in the Melitopol Offensive from August to November 1943.[8]

In 1944, Margelov became the commander of the 49th Guards Rifle Division. During the Bereznegovatoye–Snigirevka Offensive, the division crossed the Dnieper on the night of 12 March. On the next night, the rapidly advancing division crossed the Inhulets River and captured Kherson within a few hours. The division was awarded the title "Kherson" and Margelov became a Hero of the Soviet Union on 19 March.[8] Margelov led the division through the Jassy–Kishinev Offensive, Belgrade Offensive, Budapest Offensive,[9] Vienna Offensive and the Prague Offensive. During fighting outside Budapest, the division repulsed German counterattacks on the night of 13–14 February 1945.[10] For its actions the division was awarded the Order of Suvorov 2nd class. In the Moscow Victory Parade of 1945, he commanded a battalion on the regiment representing the 2nd Ukrainian Front.[8] 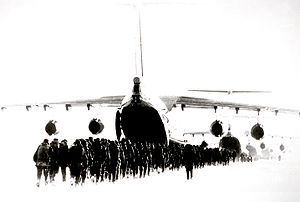 In 1948, Margelov graduated from the Voroshilov Military Academy of the USSR Army General Staff and became the commander of the 76th Guards Airborne Division in April in Pskov. Between 1950 and 1954, he was the commander of the 37th Guards Airborne Corps. In May 1954, he became commander of the Soviet airborne. After an incident in the airborne forces, which Schofield describes as encouraging a sergeant to wrestle a bear during a birthday party,[11] Margelov was demoted to deputy commander in 1959.[8] In July 1961, he became the airborne forces commander again. He initiated the mass production of parachute systems and helped to introduce the An-22 and Il-76 into service.[6] During his tenure in command of the VDV, the PP-127 parachute was developed, which allowed BMD-1 infantry fighting vehicles to be airdropped. On 28 October 1967, Margelov was promoted to general of the army. He organized the Soviet airborne operations during the Warsaw Pact invasion of Czechoslovakia. From January 1979, he was in the group of inspectors of the Ministry of Defence. Margelov was the chairman of the State Examination Commission of the Ryazan Airborne School. Margelov lived in Moscow and died on 4 March 1990 at the age of 82.[12] He is buried in the Novodevichy Cemetery.

The Ryazan Higher Airborne Command School is named after Margelov. There is also a street in Moscow named for him.[23]

On 6 May 2005, the Russian Federation Ministry of Defence established the departmental Medal "Army General Margelov", awarded to soldiers of the VDV.[24]