Vazgen I also Vazken I of Bucharest, (Armenian: Վազգէն Ա Բուխարեստցի), born Levon Garabed Baljian (Armenian: Լևոն Կարապետ Աբրահամի Պալճյան; September 20, 1908 – August 18, 1994)[1] was the Catholicos of the Armenian Apostolic Church between 1955 and 1994, in one of the longest reigns of the Armenian Catholicoi. A native of Romania, he began his career as a philosopher, before becoming a Doctor of Theology and a member of the local Armenian clergy. The leader of the Armenian Apostolic Church hierarchy in Romania, he became Catholicos during the 1950s, moving to the Soviet Union and residing in the Armenian SSR. Vazgen I led the Armenian Church during the dissolution of the Soviet Union, and was the first Catholicos in newly independent Armenia.

Vazgen was born in Bucharest to a family belonging to the Armenian-Romanian community. His father was a shoemaker and his mother was a schoolteacher. The young Levon Baljian did not initially pursue the Church as a profession, instead graduating from the University of Bucharest's Faculty of Philosophy and Letters. After graduation, he became a philosopher and published a series of scholarly articles. 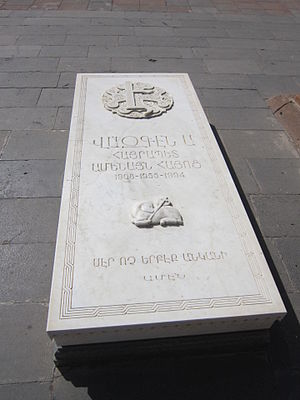 His rise through the hierarchy of the Church culminated in 1955 when he was elected Catholicos, becoming one of the youngest Catholicoi in the history of the Armenian Apostolic Church. He would reign until his death in 1994. During his long time as Catholicos, he managed to assert some independence for his church in face of the totalitarian Soviet rule in the Armenian SSR, and lived to see religious freedom restored under Armenia's national government in 1991.

From then on, he was very busy renewing ancient Armenian churches and reviving institutions of the church. He saved a number of church treasures by establishing the Alex Manoogian Museum of the Mother Church. Vazgen intensified contacts with the Armenian Catholic Church, with the aim of reuniting both wings of Armenian Christianity. He died on August 18, 1994, after suffering from a long-term illness.[2]