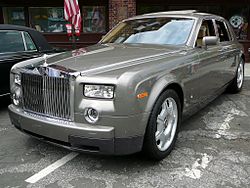 Veblen goods, such as a Rolls-Royce Phantom luxury automobile, are considered desirable consumer products for conspicuous consumption, because of their high prices.

In economics, Veblen goods are types of material commodities for which the demand is proportional to its high price, which is an apparent contradiction of the law of demand; Veblen goods also are commodities that function as positional goods. Veblen goods are types of luxury goods, such as expensive wines, jewelry, fashion-designer handbags, and luxury cars, which are in demand because of the high prices asked for them. The high price makes the goods desirable as symbols of the buyer's high social status, by way of conspicuous consumption and conspicuous leisure; conversely, a decrease of the prices of Veblen goods would decrease demand for the products.[1]

In an economy, the consumption of Veblen goods is a function of the Veblen effect (goods desired for being over-priced) that is named after the American economist Thorstein Veblen, who first identified conspicuous consumption as a mode of status-seeking in The Theory of the Leisure Class (1899).[2]

A price increase may increase that high status and perception of exclusivity, thereby making the good even more preferable. At the other end of the spectrum, with luxury items priced equal to non-luxury items of lower quality, all else being equal more people would buy the luxury items, even though a few Veblen-seekers would not. Thus, even a Veblen good is subject to the dictum that demand moves conversely to price, although the response of demand to price is not consistent at all points on the demand curve.

The Veblen effect is one of a family of theoretically possible anomalies in the general theory of demand in microeconomics. Other related effects include:

Some of these effects are discussed in a classic article by Leibenstein (1950).[4] The concept of the counter-Veblen effect is less well known, although it logically completes the family.[5]

None of these effects in itself predicts what will happen to actual quantity of goods demanded (the number of units purchased) as prices change—they refer only to preferences or propensities to purchase. The actual effect on quantity demanded will depend on the range of other goods available, their prices, and their substitutabilities for the goods concerned. The effects are anomalies within demand theory because the theory normally assumes that preferences are independent of price or the number of units being sold. They are therefore collectively referred to as interaction effects.

The interaction effects are a different kind of anomaly from that posed by Giffen goods. The Giffen goods theory is one for which observed demand rises as price rises, but the effect arises without any interaction between price and preference—it results from the interplay of the income effect and the substitution effect of a change in price.

Recent research has begun to examine the empirical evidence for the existence of goods which show these interaction effects.[6] The Yale Law Journal has published a broad overview.[7] Studies have also found evidence suggesting people receive more pleasure from more expensive goods.[8]