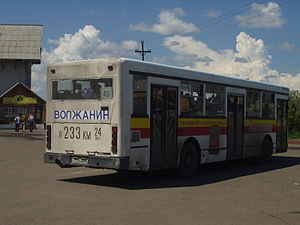 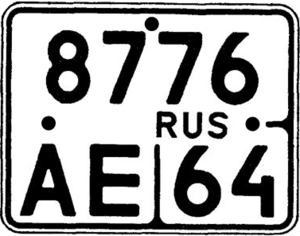 The current format uses a letter followed by 3 digits and two more letters. To improve legibility of the numbers for Russian cars abroad, only a small subset of Cyrillic characters that look like Latin characters are used (12 letters: А, В, Е, К, М, Н, О, Р, С, Т, У, Х). Finally, the region number (77, 97, 99, 177, 197, 199, and 777 for Moscow, 78, 98, and 178 for Saint Petersburg, etc.) and letters "RUS" are included, as well as the national flag (the flag was not used on some of the earliest plates of this format). There is a different format for trailers (2 letters and 4 digits). Motorcycles, mopeds and scooters plates are made of square reflective plates and it's format is 4 digits at the top and two letters at the bottom. These plates lack national flag.

Some vehicles, like trolleybuses, are not required to have license plates, because they cannot leave the network they operate on and can be identified by number that is painted and is given by local public transport authority. Trucks and buses generally have their licence numbers repeated in large letters on the rear of the vehicle for easier identification (a practice continued from Soviet days), although they also bear licence plates.[citation needed] Some autonomous regions are not required to have the flag on the licence plates.[citation needed]

Special plates in the above categories never carry the Russian flag, except for trailers.

Rich businessmen, prominent politicians and crime lords often use para-legally acquired special licence plates (government or police) to get preferential treatment from the transport police and as a status symbol. Often, this is used in conjunction with a flashing siren. The Society of Blue Buckets is a protest movement that opposes this trend.[1]

As of 2014, there are new codes for Russian plates; number 82 for the Republic of Crimea and 92 for Sevastopol. The Russian Federation then officially annexed Crimea from Ukraine and now administers it as two federal subjects: the Republic of Crimea and the federal city of Sevastopol. Ukraine, backed by most of the international community, refuses to accept the annexation and continues to assert its right over the peninsula.

As per GOST provision, only 1,726,272 combinations may be issued within one administration unit. In certain regions, the amount of vehicles exceeds that number, and the combination may not be reused after a vehicle was taken off the registration. All this creates an issue of running out of numbers.

A short-term solution was introducing more codes for those regions. Thus, some regions have two codes issued to them, Perm Krai and the city of St. Petersburg have three, Krasnoyarsk Krai has four, Moscow Oblast has five, and the federal city of Moscow has seven codes. But this does not fully solve the problem, as the authorities may eventually run out of three-numeral regional codes, and a fourth digit will not fit without changing the standardized layout of the plate.[citation needed]

Introduction of new style license plate is being considered as a future solution.[citation needed] 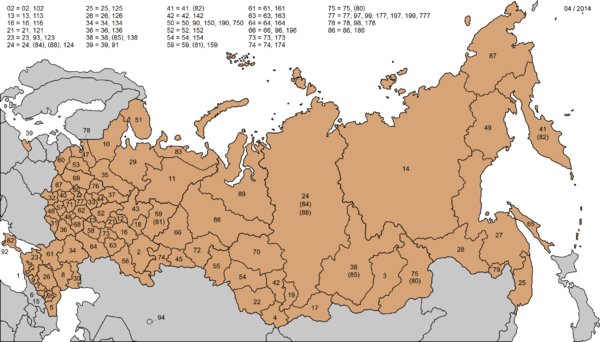 The license plate regional codes from 01 to 89 originally matched the numerical order of the federal subjects of Russia as listed in the Article 65 of the Constitution of Russia at the moment of the creation of the standard. In the following years some codes were reassigned or discontinued. As the populous regions started running out of license plate combinations, new codes past code 89 were assigned to them as well. Additional triple-digit codes were created by adding a "1" or a "7" to the existing regional code (e.g. 63 and 163 for Samara Oblast or 50, 150, 750 in Moscow Oblast).[2]

File:Russia licenseplate red.JPG
014 is the code for Norway in Russia

2Code 092 is a former code for Czechoslovakia. Currently, codes for Czech Republic and Slovakia are 148 (Czech Republic), and 149 (Slovakia).

4Earlier, code 111 belonged to the Council for Mutual Economic Assistance. Replaced by the Sovereign Military Order of Malta.

7Code 123 is a former code for Liechtenstein.

9Earlier, code 128 belonged to the European Union. Replaced by Macedonia.

10Code 130 is a former code for the International Organizations.

12Code 501 is a former code for the Un International Centre.

13Code 502 is a former code for the Eurocommision. The current code for this organization is 499.