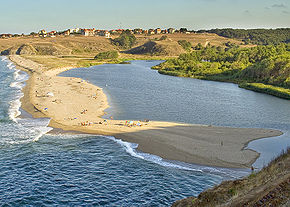 The estuary of the Veleka. Longshore drift has led to sediment deposition which has led to the formation of a spit Sinemorets, Bulgaria

The Veleka (Bulgarian: Велека, Turkish: Kocadere) is a river in the very southeast of Bulgaria (Burgas Province), as well as the very northeast of European Turkey. It is 147 km long, of which 123 km in Bulgaria and 25 km in Turkey, and takes it sources from a number of Karst springs in the Turkish part of the Strandzha (İstranca) mountain to flow into the Black Sea at the Bulgarian village of Sinemorets. Veleka is situated in Strandzha Nature Park.

The river's width near the mouth is from 8 to 10 m and its depth ranges from 2 to 4 m. At its mouth, the Veleka is 50 m wide and 7 to 8 m deep, overflowing shortly before making a turn and pouring into the sea.

The waters of the Veleka are rich in flora and fauna, with more than 30 species of freshwater fish being present, the most frequent one being the chub. Five endangered animal species inhabit the river, as well as important regional plants.

Veleka Ridge on Livingston Island in the South Shetland Islands, Antarctica is named after Veleka River.