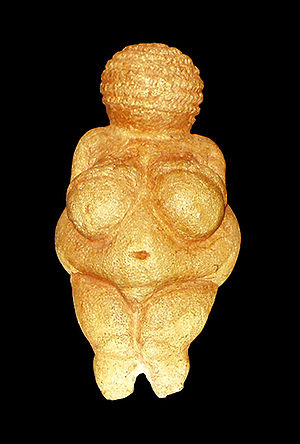 A Venus figurine is any Upper Paleolithic statuette portraying a woman,[1] although the fewer images depicting men or figures of uncertain gender,[2] and those in relief or engraved on rock or stones are often discussed together.[3] Most have been unearthed in Europe, but others have been found as far away as Siberia, extending their distribution across much of Eurasia, although with many gaps, such as the Mediterranean outside Italy.[4]

Most of them date from the Gravettian period (26,000–21,000 years ago),[5] but examples exist as early as the Venus of Hohle Fels, which dates back at least 35,000 years to the Aurignacian, and as late as the Venus of Monruz, from about 11,000 years ago in the Magdalenian. These figurines were carved from soft stone (such as steatite, calcite or limestone), bone or ivory, or formed of clay and fired. The latter are among the oldest ceramics known. In total, some 144 such figurines are known;[6] virtually all of modest size, between 3 cm and 40 cm or more in height.[7] They are some of the earliest works of prehistoric art.

Most of them have small heads, wide hips, and legs that taper to a point. Various figurines exaggerate the abdomen, hips, breasts, thighs, or vulva, although many do not, and the concentration in popular accounts on those that do reflects modern preoccupations rather than the range of actual artefacts. In contrast, arms and feet are often absent, and the head is usually small and faceless. Depictions of hairstyles can be detailed, and especially in Siberian examples, clothing or tattoos may be indicated.[8]

The expression 'Venus' was first used in the mid-nineteenth century by the Marquis de Vibraye, who found a figurine at Laugerie-Basse in the Vezere valley Dordogne. He called it "Venus Impudica", alluding to the hellenistic Venus Pudica.[12]

The use of the name is metaphorical, there is no link between the figurines and the Roman goddess Venus, although they have been seen as representations of a primordial female goddess. The term has been criticised for being more a reflection of modern western ideas than reflecting the beliefs of the sculptures' original owners, but the name has persisted.[13]

The first Upper Paleolithic representation of a woman was discovered about 1864 by the Marquis de Vibraye at Laugerie-Basse (Dordogne, France), where initial archaeological surveys had already been undertaken. Vibraye named his find the "Vénus impudique", a knowing contrast to the "modest" "Venus Pudica" Hellenistic type. The Magdalenian "Venus" from Laugerie-Basse is headless, footless, armless but with a strongly incised vaginal opening.[14]

Four years later, Salomon Reinach published an article about a group of steatite figurines from the caves of Balzi Rossi. The famous Venus of Willendorf was excavated in 1908 in a loess deposit in the Danube valley, Austria. Since then, hundreds of similar figurines have been discovered from the Pyrenees to the plains of Siberia. They are collectively described as "Venus" figurines in reference to the Roman goddess of beauty, Venus, since the prehistorians of the early 20th century assumed they represented an ancient ideal of beauty. Early discourse on "Venus" figurines was preoccupied with identifying the race being represented; and the steatopygous fascination of Saartjie Baartman, the "Hottentot Venus" exhibited as a living ethnographic curiosity to connoisseurs in Paris early in the nineteenth century.[15] 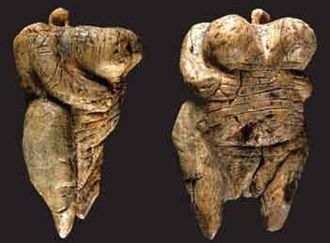 Two views of the Venus of Hohle Fels figurine (height 6 cm (2.4 in)), which may have been worn as an amulet and is the earliest known, undisputed example of figurative prehistoric art

In September 2008, archaeologists from the University of Tübingen discovered a 6 cm figurine woman carved from a mammoth’s tusk, the Venus of Hohle Fels, dated to at least 35,000 years ago, representing the earliest known sculpture of this type, and the earliest known work of figurative art altogether. The ivory carving, found in six fragments in Germany's Hohle Fels cave, represents the typical features of Venus figurines, including the swollen belly, wide-set thighs, and large breasts.[16][17] 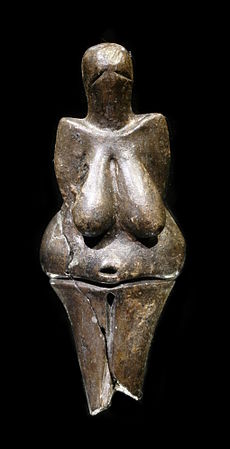 The majority of the Venus figurines appear to be depictions of females, many of which follow certain artistic conventions, on the lines of schematisation and stylisation. Most of them are roughly lozenge-shaped, with two tapering terminals at top (head) and bottom (legs) and the widest point in the middle (hips/belly). In some examples, certain parts of the human anatomy are exaggerated: abdomen, hips, breasts, thighs, vulva. In contrast, other anatomical details are neglected or absent, especially arms and feet. The heads are often of relatively small size and devoid of detail. Some may represent pregnant women, while others show no such signs.[19] It has been suggested that aspects of the typical depiction and perspective, such as the large and often pendulous breasts, emphasis on the upper rather than lower buttocks, and lack of feet and faces, support the theory that these are self-portraits by women without access to mirrors, looking at their own bodies.[20] The absence of feet has led to suggestions that the figures might have been made to stand upright by inserting the legs into the ground like a peg.

The high amount of fat around the buttocks of some of the figurines has led to numerous interpretations. The issue was first raised by Édouard Piette, excavator of the Brassempouy figure and of several other examples from the Pyrenees. Some authors saw this feature as the depiction of an actual physical property, resembling the Khoisan tribe of southern Africa, while others interpreted it as a symbol of fertility and abundance. Recently, similar figurines with protruding buttocks from the prehistoric Jōmon period Japan were also interpreted as steatopygia of local women, possibly under nutritional stress.[21]

The Venus of Willendorf and the Venus of Laussel bear traces of having been externally covered in red ochre. The significance of this is not clear, but is normally assumed to be religious or ritual in nature—perhaps symbolic of the blood of menstruation or childbirth. Some buried human bodies were similarly covered, and the colour may just represent life.[22]

All generally accepted Paleolithic female figurines are from the Upper Palaeolithic. Although they were originally mostly considered Aurignacian, the majority are now associated with the Gravettian and Solutrean.[23] In these periods, the more rotund figurines are predominant. During the Magdalenian, the forms become finer with more detail; conventional stylization also develops.

A number of attempts to subdivide or classify the figurines have been made.[24] One of the less controversial is that by Henri Delporte, simply based on geographic provenance.[25] He distinguishes:

According to André Leroi-Gourhan, there are cultural connections between all these groups. He states that certain anatomical details suggest a shared Oriental origin, followed by a westward diffusion.[28]

There are many interpretations of the figurines, often based on little argument or fact.[29]

Like many prehistoric artifacts, the cultural meaning of these figures may never be known. Archaeologists speculate, however, that they may be emblems of security and success, fertility icons, or direct representations of a mother goddess. The female figures, as part of Upper Palaeolithic portable art, appear to have no practical use in the context of subsistence. They are mostly discovered in settlement contexts, both in open-air sites and caves;[30] burial contexts are much rarer.[citation needed]

At Gagarino in Russia, seven Venus figurines were found in a hut of 5 m diameter; they have been interpreted as apotropaic amulets, connected with the occupants of the dwelling. At Mal'ta, near Lake Baikal in Siberia, figurines are only known from the left sides of huts. The figurines were probably not hidden or secret amulets, but rather were displayed to be seen by all (a factor that may explain their wide geographic spread). An image of excess weight may have symbolized a yearning for plenty and security.[citation needed]

Helen Benigni argues in The Emergence of the Goddess that the consistency in design of these featureless, large-breasted, often pregnant figures throughout a wide region and over a long period of time suggests they represent an archetype of a female Supreme Creator. Neolithic, Bronze Age, and Iron Age people likely connected the female as a creator innately tied to the cycles of nature: women gave birth and their menstrual cycles aligned with lunar cycles and tides.[31]