Vera Fyodorovna Komissarzhevskaya (Russian: Ве́ра Фё́доровна Комиссарже́вская; 8 November 1864 – 23 February 1910) was one of the most celebrated actresses and theatre managers of the late Russian Empire. She made her professional debut in 1893, after having acted as an amateur at Constantin Stanislavsky's Society of Art and Literature. She is probably best known today for originating the role of Nina in the ill-fated premiere of Anton Chekhov's The Seagull, at the Alexandrinsky Theatre in Saint Petersburg in 1896. Though the production was deemed an utter failure, Komissarzhevskaya's performance was highly praised.[1]

Later in her career, Komissarzhevskaya is notable for her patronage of the up-and-coming theatre artist, Vsevolod Meyerhold. Following Meyerhold's unsuccessful attempts to stage symbolist plays at Stanislavsky's Moscow Art Theatre, Komissarzhevskaya invited him to try his experiments at her new Komissarjevsky Theatre. During their short-lived collaboration, the two managed to develop Meyerhold's symbolist aesthetic and Komissarzhevskaya herself starred in two of the most critically and commercially successful productions,

Komissarzhevskaya was born in Saint Petersburg, into a wealthy and distinguished family. Her father was the celebrated Russian opera singer Fyodor Komissarzhevsky, a leading tenor at the Mariinsky Theatre, and her mother, Mariya Nikolaevna Shulgina, was the daughter of General Nikolai Shulgin, a war hero and officer in the Preobrazhensky regiment. Komissarzhevskaya had a close relationship with her father, and she frequently corresponded with Komissarzhevsky. Towards the end of his life, he wrote to Mariya Nikolaevna, saying:

This commitment to his daughter's life and work was a testament to her favor, as her half-brother was Theodore Komisarjevsky, a famous theatrical director in his own right.

At the age of 19, Komissarzhevskaya married the painter Count Vladimir Leonidovich Muravyov, but preferred to keep her stage name even after the marriage. Some years later, she was broken-hearted to discover that her sister was pregnant with Muravyov's child, and she left him, throwing herself 100% into her acting career. In 1896, she began working at Saint Petersburg's Alexandrinsky Theatre, where her greatest triumph was the role of Nina Zarechnaya in the premiere of Chekhov's The Seagull (1897).[2]

In 1904, Komissarzhevskaya founded her own theatre in Saint Petersburg, where she appeared in productions of Chekhov's Ivanov and Uncle Vanya, —and as Desdemona in William Shakespeare's Othello, Ophelia in Hamlet, and Nora in Ibsen's A Doll's House.

Tiring of the nineteenth-century theatre's routine scenarios and the dominant naturalistic trends of the time, however, Komissarzhevskaya boldly extended an invitation to the young director Vsevolod Meyerhold. Though they found some success with Komissarzhevskaya starring in the title roles of Ibsen's Hedda Gabler and Maeterlink's Sister Beatrice, the collaboration proved unfruitful. Meyerhold failed to create role to cater to Komissarzhevskaya's acting style, a mixture of intense emotional sensitivity with high theatrical seriousness. She dismissed him after just one year, and spent the remainder of her career touring old productions in the United States and Europe.

Even after her exit from Russia, Komissarzhevskaya's fame was such that when she died of smallpox in 1910, her funeral was attended by vast crowds of mourners, and even occasioned some poignant lyrics from the Russian poet Alexander Blok. One of the major theatres of St. Petersburg still bears her name[3] and, in 1980 there was even a biographical film made about the actress' life and career called, Ya - aktrisa ("I am an actress"), starring Natalia Saiko. 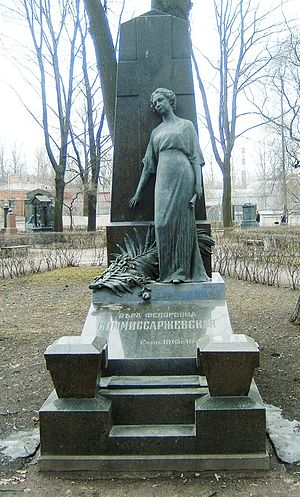 Komissarzhevskaya's sculpture on her grave on Tikhvin Cemetery in Saint Petersburg
Retrieved from "https://infogalactic.com/w/index.php?title=Vera_Komissarzhevskaya&oldid=637819"
Categories: