From Infogalactic: the planetary knowledge core
Jump to: navigation, search
This article is about the Soviet sculptor. For other uses, see Mukhina. 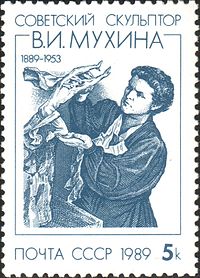 Mukhina was born in Riga into a wealthy merchant family, and lived at Turgeneva st. 23/25, where a memorial plaque has now been placed. She later moved to Moscow, where she studied at several private art schools, including those of Konstantin Yuon and Ilya Mashkov. In 1912 she traveled to Paris, where she attended the Académie de la Grande Chaumière and took lessons from Emile-Antoine Bourdelle, then continued on to Italy to explore the painting and sculpture of the Renaissance period.

In 1915 and 1916, she served as assistant to Aleksandra Ekster at Alexander Tairov's Chamber Theater in Moscow. In 1918 she married Alexei Zamkov, a military surgeon.

In the 1920s Mukhina rose to become one of the Soviet Union's most prominent sculptors, and although she continued to produce Cubist sculpture as late as 1922, she became a leading figure of Socialist realism, both in style and ideology. She taught at the state school, Vkhutemas, in 1926-1927, and came to international attention with the 1937 Worker and Kolkhoz Woman. Her studio's work on official monuments and architectural sculpture on state commissions continued through her death. She also experimented with glass, producing glass figural busts.

Because of Mukhina's influence as a great Soviet artist, and as a former student of the Latvian sculptor Kārlis Zāle, she persuaded Soviet officials in the late 1940s that the Freedom Monument in Riga was of great artistic importance. Due to her efforts, the monument was not demolished to make way for a statue of Joseph Stalin.

Mukhina's house and studio at 3a Prechistensky Lane is slated for demolition. She is buried in Novodevichy Cemetery.

Mukhina's most celebrated work by far is the giant monument Worker and Kolkhoz Woman which was the centerpiece of the Soviet pavilion at the 1937 International Exhibition in Paris.[2] It was the world's first welded sculpture.[3] The 24-meter-tall, 75-ton monument was made of plate of stainless steel on a wooden frame, the plates connected by an innovative method of spot welding. One hand of each figure holds respectively a hammer and a sickle, the two implements joining to form the hammer and sickle symbol of the Soviet Union. In 1947 the sculpture, now on permanent display at the All-Russia Exhibition Centre, became the logo of the Russian Mosfilm studio. It was renovated and re-installed on a higher pedestal in 2009.[4]