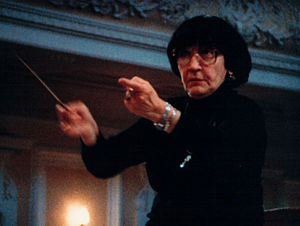 Veronika Borisovna Dudarova (Russian: Вероника Борисовна Дударова; Ossetian: Дудараты Барисы чызг Вероникæ; December 5 [O.S. November 22] 1916 – January 15, 2009) was a Soviet and later Russian conductor, the first woman to succeed as conductor of symphony orchestras in the 20th century. She became a conductor of the Moscow State Symphony Orchestra in 1947, and led this and other orchestras for sixty years. In 1991, she founded the Symphony Orchestra of Russia.[1]

In the 1987 documentary, A Woman Is a Risky Bet: Six Orchestra Conductors, directed by Christina Olofson, Dudarova conducts the Moscow State Symphony Orchestra and Choir in a performance of Mozart's Requiem. The main-belt asteroid 9737 Dudarova was named after her.[3]

According to her son Mikhail, during a concert in Andorra in 1993, due to her intense style of conducting, Dudarova fell from the podium, but went on conducting the orchestra lying on the floor leaning on her right hand and the piece was performed to the end without an interruption.[4]