From Infogalactic: the planetary knowledge core
Jump to: navigation, search
For other uses, see Vertex (disambiguation). 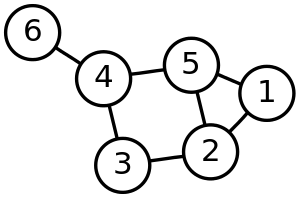 From the point of view of graph theory, vertices are treated as featureless and indivisible objects, although they may have additional structure depending on the application from which the graph arises; for instance, a semantic network is a graph in which the vertices represent concepts or classes of objects.

A graph is vertex-transitive if it has symmetries that map any vertex to any other vertex. In the context of graph enumeration and graph isomorphism it is important to distinguish between labeled vertices and unlabeled vertices. A labeled vertex is a vertex that is associated with extra information that enables it to be distinguished from other labeled vertices; two graphs can be considered isomorphic only if the correspondence between their vertices pairs up vertices with equal labels. An unlabeled vertex is one that can be substituted for any other vertex based only on its adjacencies in the graph and not based on any additional information.