From Infogalactic: the planetary knowledge core
Jump to: navigation, search
Not to be confused with Vaisakhi. 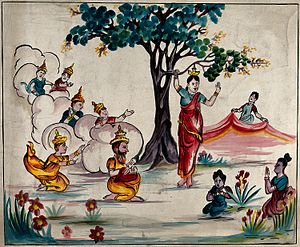 Queen Maya holds onto a branch of a tree while giving birth to the Buddha, who is received by Śakra as other gods look on.

The decision to agree to celebrate Vesākha as the Buddha’s birthday was formalized at the first conference of the World Fellowship of Buddhists held in Sri Lanka in 1950, although festivals at this time in the Buddhist world are a centuries-old tradition. The resolution that was adopted at the World Conference reads as follows:

That this Conference of the World Fellowship of Buddhists, while recording its appreciation of the gracious act of His Majesty, the Maharaja of Nepal in making the full-moon day of Vesak a Public Holiday in Nepal, earnestly requests the Heads of Governments of all countries in which large or small number of Buddhists are to be found, to take steps to make the full-moon day in the month of May a Public Holiday in honour of the Buddha, who is universally acclaimed as one of the greatest benefactors of Humanity.[4]

On Vesākha Day, Buddhists all over the world commemorate events of significance to Buddhists of all traditions: The birth, enlightenment and the passing away of Gautama Buddha. As Buddhism spread from India it was assimilated into many foreign cultures, and consequently Vesākha is celebrated in many different ways all over the world. In India, Vaishakh Purnima day is also known as Buddha Jayanti day and has been traditionally accepted as Buddha's birth day.

In 1999, the United Nations resolved to internationally observe the day of Vesak at its headquarters and offices.[5]

The name of the observance is derived from the Pali term vesākha or Sanskrit vaiśākha, which is the name of the lunar month in the Hindu calendar falling in April–May (see Vaisakha).[6] In Mahayana Buddhist traditions, the holiday is known by its Sanskrit name (Vaiśākha) and derived variants of it. Local renditions of the name vary by language, including:

May 2007 just had two full moon days, the 1st and the 31st. Some countries (including Sri Lanka, Cambodia and Malaysia) celebrated Vesākha on the 1st, while others (Thailand, Singapore) celebrated the holiday on the 31st due to different local lunar observance. This difference also manifests in the observance of other Buddhist holidays, which are traditionally observed at the local full moon.

Likewise, in 2012, Vesak or the birth anniversary of the Buddha was observed on 28 April in Hong Kong and Taiwan, on 5 May in Sri Lanka, on 6 May in India, on 28 May in South Korea and on 4 June in Thailand. (In 1999 the Taiwanese government set Buddha's birthday as the second Sunday of May, the same date as Mother's Day.[7][8]). In 2014, Vesak is celebrated on 13 May in Myanmar, Singapore and Thailand while it is observed on 15 May in Indonesia.

On Vesākha day, devout Buddhists and followers alike are expected and requested to assemble in their various temples before dawn for the ceremonial, and honorable, hoisting of the Buddhist flag and the singing of hymns in praise of the holy triple gem: The Buddha, The Dharma (his teachings), and The Sangha (his disciples). Devotees may bring simple offerings of flowers, candles and joss-sticks to lay at the feet of their teacher. These symbolic offerings are to remind followers that just as the beautiful flowers would wither away after a short while and the candles and joss-sticks would soon burn out, so too is life subject to decay and destruction. Devotees are enjoined to make a special effort to refrain from killing of any kind. They are encouraged to partake of vegetarian food for the day. In some countries, notably Sri Lanka, two days are set aside for the celebration of Vesākha and all liquor shops and slaughter houses are closed by government decree during the two days. Also birds, insects and animals are released by the thousands in what is known as a 'symbolic act of liberation'; of giving freedom to those who are in captivity, imprisoned, or tortured against their will.[citation needed] Some devout Buddhists will wear a simple white dress and spend the whole day in temples with renewed determination to observe the eight Precepts. 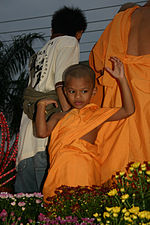 Devout Buddhists undertake to lead a noble life according to the teaching by making daily affirmations to observe the Five Precepts. However, on special days, notably new moon and full moon days, they observe the eight Precepts to train themselves to practice morality, simplicity and humility.

Some temples also display a small statue of the Buddha in front of the altar in a small basin filled with water and decorated with flowers, allowing devotees to pour water over the statue; it is symbolic of the cleansing of a practitioner's bad karma, and to reenact the events following the Buddha's birth, when devas and spirits made heavenly offerings to him.

Devotees are expected to listen to talks given by monks. On this day monks will recite verses uttered by the Buddha twenty-five centuries ago, to invoke peace and happiness for the government and the people. Buddhists are reminded to live in harmony with people of other faiths and to respect the beliefs of other people as the Buddha taught.

Bringing happiness to others

Celebrating Vesākha also means making special efforts to bring happiness to the unfortunate like the aged, the handicapped and the sick. To this day, Buddhists will distribute gifts in cash and kind to various charitable homes throughout the country. Vesākha is also a time for great joy and happiness, expressed not by pandering to one’s appetites but by concentrating on useful activities such as decorating and illuminating temples, painting and creating exquisite scenes from the life of the Buddha for public dissemination. Devout Buddhists also vie with one another to provide refreshments and vegetarian food to followers who visit the temple to pay homage to the Enlightened One.[citation needed]

Paying homage to the Buddha

Tradition ascribes to the Buddha himself instruction on how to pay him homage. Just before he died, he saw his faithful attendant Ananda, weeping. The Buddha advised him not to weep, but to understand the universal law that all compounded things (including even his own body) must disintegrate. He advised everyone not to cry over the disintegration of the physical body but to regard his teachings (The Dhamma) as their teacher from then on, because only the Dhamma truth is eternal and not subject to the law of change. He also stressed that the way to pay homage to him was not merely by offering flowers, incense, and lights, but by truly and sincerely striving to follow his teachings. This is how Buddhists are expected to celebrate Vesak: to use the opportunity to reiterate their determination to lead noble lives, to develop their minds, to practise loving-kindness and to bring peace and harmony to humanity. 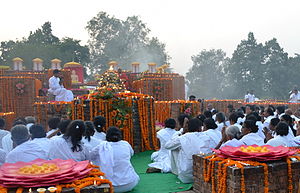 Vesak is celebrated in Jetavana, India, 2011

In Japan, Vesak celebrations include pouring 甘茶 (amacha?), a sweet tea made from Hydrangea macrophylla, on statues. In Buddhist religious sites such as temples and viharas, more involved ceremonies are conducted for lay Buddhists, priests, and monks and nuns.

Vesak, commonly known in Nepal as "Buddha Jayanti" is widely celebrated all across the country, predominantly, Lumbini – the birthplace of Buddha, and Swayambhu – the holy temple for Buddhists, also known as "the Monkey Temple". The main door of Swayambhu is opened only on this very day, therefore, people from all over Kathmandu valley are stimulated by the event. Thousands of pilgrims from various parts of the world come together to celebrate Buddha's birthday at his birthplace, Lumbini. In Nepal, Buddha is worshipped by all religious groups, therefore "Buddha Jayanti" is marked by a public holiday. People donate foods and clothes to the needy and also provide financial aid to monasteries and schools where Buddhism is taught and practised. 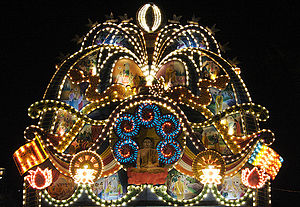 A Vesak pandal or thorana in Colombo, Sri Lanka 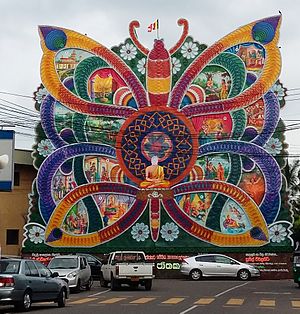 Vesak is celebrated as a religious and a cultural festival in Sri Lanka on the full moon of the lunar month of Vesak (usually in the Gregorian month of May), for about one week. During this week, the selling of alcohol and fresh meat is usually prohibited, with abattoirs also being closed.[11] Celebrations include religious and alms-giving activities. Electrically-lit pandals called thoranas are erected in locations mainly in Colombo, Kandy, Galle and elsewhere, most sponsored by donors, religious societies and welfare groups. Each pandal illustrates a story from the Jataka tales.

In addition, colourful lanterns called Vesak kuudu are hung along streets and in front of homes. They signify the light of the Buddha, Dharma and the Sangha. Food stalls set up by Buddhist devotees called dansälas provide free food and drinks to passersby. Groups of people from community organisations, businesses and government departments sing bhakti gee (Buddhist devotional songs). Colombo experiences a massive influx of people from all parts of the country during this week. 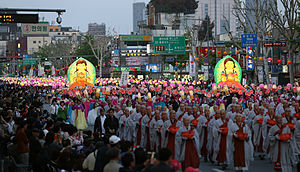 In South Korea the birthday of Buddha is celebrated on the 8th day of the 4th month in the Korean lunar calendar (as well as in Hong Kong, Macau, Vietnam) and is an official holiday. This day is called 석가탄신일 (Seokga tansinil), meaning "Buddha's birthday" or 부처님 오신 날 (Bucheonim osin nal) meaning "the day when the Buddha came". It has now grown into one of the nation’s biggest cultural festivals. Lotus lanterns cover the entire temple throughout the month which are often flooded down the street.[12] On the day of Buddha's birth, many temples provide free meals and tea to all visitors. The breakfast and lunch provided are often sanchae bibimbap.

Before 1975, the birthday of Buddha was a national public holiday in South Vietnam[13] It was a public festival with float and lantern parades on the streets. However, after the Fall of Saigon, the day was no longer a public holiday.

Celebrated by Buddhists to mark three momentous events in Buddha's life – his birth, enlightenment, and his departure from the human world, the Wesak celebration in Malaysia begins at dawn when devotees gather at Buddhist temples nationwide to meditate on the Eight Precepts. Donations - giving food to the needy and offerings of incense and joss sticks - and prayers are carried out. The sutras are chanted in unison by monks in saffron robes. The celebration is highlighted by a candle procession. Wesak Day in Malaysia is a national public holiday. 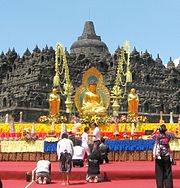 This significant and traditional holy day is observed throughout Indonesia where it is known as Waisak Day. At Borobudur, thousands of Buddhist monks will join together to repeat mantras and meditate as they circuit the temple in a ritual called "Pradaksina". This is a form of tribute to the temple. Monks celebrate the special day by bottling holy water (which symbolises humility) and transporting flames (which symbolize light and enlightenment) from location to location. The monks also took part in the "Pindapata" ritual, where they received charity from the people of Indonesia. Waisak Day in Indonesia has been celebrated as a national public holiday every year since 1983.