Viacheslav Alexandrovich "Slava" Fetisov (Russian: Вячеслав Александрович Фетисов, Vjačeslav Aleksandrovič Fetisov; born 20 April 1958) is a retired Russian professional ice hockey defenseman. He played for HC CSKA Moscow for 13 seasons before joining the National Hockey League (NHL), where he played with the New Jersey Devils and won back-to-back Stanley Cups with the Detroit Red Wings. After retiring from his playing career, he became the assistant coach for the New Jersey Devils. Having a very successful four years, he helped get the team to two Stanley Cup finals and one Stanley Cup victory. Fetisov was instrumental in breaking the barrier that had previously prohibited Soviet players from leaving the Soviet Union to join the NHL. His actions not only resulted in a number of top Soviet players joining the NHL, but encouraged many of the best players from all over Europe to go to America.[1] Internationally, he was a long-time captain for the Soviet Union national team[1] and won two gold medals at the Winter Olympics. Fetisov was part of the Soviet team that lost to the United States in the 1980 Winter Olympics in Lake Placid—the game that came to be known as the "Miracle on Ice". In 2002, Fetisov led the Russian Ice Hockey Olympic team as GM and Head Coach, attaining a bronze medal. Considered one of the best defensemen of all time, he was voted as one of six players to the International Ice Hockey Federation's (IIHF) Centennial All-Star Team.

After retiring as a coach, Fetisov embarked on a political and executive career. Following the 2002 Winter Olympics Russian President Vladimir Putin offered him the position as Minister of Sport, a post he held until 2008. He is currently a member of the upper house of the Federal Assembly of Russia representing Primorsky Krai, the founder and chairman of the Board of Directors of the KHL and chair of the World Anti-Doping Agency (WADA) Athletes Committee.[2] Fetisov was president of professional Russian hockey club HC CSKA Moscow of the Kontinental Hockey League (KHL). He was also the key member of the bidding committee presenting the Sochi 2014 proposal to the IOC in Guatemala in 2007, when a city was being chosen to host the 2014 Winter Olympics.

Fetisov debuted for CSKA Moscow's junior team at sixteen years old.[1] He joined the senior team in the Soviet Championship League in 1978–79 and recorded 29 points in 29 games as a rookie. In his fourth season, Fetisov reeled off 41 points in 46 games to be named the 1982 USSR Player of the Year.[1] Four seasons later, he won his second Player of the Year recognition after a 34-point season in 1985–86.[1]

Fetisov soon expressed a desire to play in the NHL and submitted a request to Soviet officials. However, Soviet players defecting to North America was strictly discouraged at the time and his request was met with great resistance. Fetisov has recalled the Soviet Minister of Defence giving him an ultimatum at the time to either apologize or be sent to play in the Ukrainian Soviet Socialist Republic.[1] Nevertheless, at the age of 31, helped by the Soviets' newfound glasnost policy, Fetisov led a group of eight Soviet players, including Helmut Balderis, Vladimir Krutov, Igor Larionov, Sergei Makarov, Sergei Mylnikov, Sergei Priakin and Sergei Starikov, into the NHL. Soviet hockey officials agreed to allow Soviet players to play in the NHL as long as they continued to compete internationally for the Soviet Union.[1]

Fetisov had been drafted by the Montreal Canadiens in the 1978 NHL Entry Draft eleven years prior. However, unable to play in North America at the time, he was re-entered into the 1983 NHL Entry Draft, where he was selected by the New Jersey Devils. Fetisov debuted with the Devils in 1989–90 and recorded eight goals and 42 points, both NHL career-highs for Fetisov.

He played in New Jersey until 1994–95, when he was traded to the Detroit Red Wings in April 1995.[1] While on the Red Wings, he played alongside Mike Ramsey, who was one of his opponents in the Miracle on Ice game at the 1980 Winter Olympics. Fetisov began producing immediately with the Red Wings, scoring 14 points in 14 games to finish the season after the trade. He helped the Red Wings to the 1995 Stanley Cup Finals, where they were defeated by his former team, the Devils. The following season, Fetisov matched his career high in points with 42-points in 1995–96. He was named to his first NHL All-Star Game in 1997, then won back-to-back Stanley Cups with Detroit in 1997 and 1998, before announcing his retirement. He took the Stanley Cup to Moscow after the 1997 championship, where the trophy appeared for the first time in Russia.[1]

Nearly eleven years later after his retirement, Fetisov came out of retirement at the age of 51 to play for CSKA Moscow in a one-game return on 11 December 2009. Head coach Sergei Nemchinov turned to Fetisov, president of the club, in need of a replacement for injured defenseman Denis Kulyash.[3] CSKA Moscow lost the game 3-2 to SKA St. Petersburg.[4]

On the international stage, Fetisov is one of the most decorated players ever. As a junior, Fetisov competed for the Soviet Union at the European Junior Championships, where he won Top Defenseman honors during the 1975–76 season, en route to two consecutive gold medals at the tournament.[1] He then helped the Soviets to three consecutive gold medals at the World Junior Championships from 1976 to 1978, taking back-to-back Top Defenseman honors in 1977 and 1978.[1]

Fetisov became an assistant coach with the New Jersey Devils following his playing career and won the Stanley Cup with the club in 2000 during his three-year tenure (1998–2002).

In 2009, he became president of HC CSKA Moscow. Following the injuries of CSKA's several key defenders, Fetisov, aged 51 at the time, signed a player's contract until the end of 2009/2010 season, resuming his playing career after eleven years.[6] 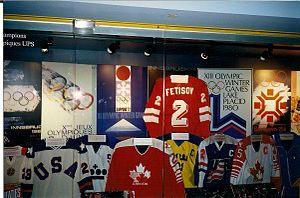 Fetisov's red uniform (#2) from the 1988 Winter Olympics in Calgary at the Hockey Hall of Fame in Toronto in 1999.

In his home country, Fetisov has been awarded the Order of the Red Banner of Labour in 1984,[7] the Order of Lenin in 1988, the Order Of Service To The Fatherland 4th class in 2000 and 3rd class 2005, the Order Of Honour in 1998, the Order of Friendship in 2007, and two Orders of the Badge of Honor. On October 22, 1981, Russian astronomer Nikolai Chernykh discovered a main-belt asteroid from the Crimean Astrophysical Observatory in Ukraine. The asteroid was named the 8806 Fetisov after Fetisov.

In North America, Fetisov was elected to the Hockey Hall of Fame on 12 November 2001 along with Mike Gartner, Dale Hawerchuk and Jari Kurri.[1] Internationally, he has been recognized by the IIHF in the International Centennial All-Star Team. He received the most votes out of all players in a poll conducted by a group of 56 experts from 16 countries (54 of which voted for Fetisov) to assemble the historic squad.[8]

He has a daughter, Anastasia, who appeared with him in the ESPN 30 for 30 film "Of Miracles and Men."

In June 1985, Fetisov was involved in a car accident that killed his younger brother Anatoly, who was 18 years old at the time and a prospect within the HC CSKA Moscow system.[1]

Twelve years later, following a private party on 13 June 1997 Fetisov, along with teammate Vladimir Konstantinov and team masseur Sergei Mnatsakanov, hired a limousine to drive them home after celebrating the Detroit Red Wings' Stanley Cup triumph. The driver, Richard Gnida, whose license was suspended at the time for drunk driving, lost control of the limousine and hit a tree on the median of Woodward Avenue, in Birmingham, Michigan, a suburb north of Detroit. Konstantinov spent several weeks in a coma before finally pulling through. He also suffered from serious head injuries and paralysis, while Fetisov escaped with relatively minor injuries and was able to play the following season. Mnatsakanov sustained heavy head injuries and also spent some time in a coma. He has had a considerably more difficult recovery than Konstantinov. The driver was charged with and convicted of driving with a suspended license.

Fetisov was the main focus of the 2014 documentary movie Red Army, among other influential Soviet players.