From Infogalactic: the planetary knowledge core
Jump to: navigation, search
For other uses, see Vice (disambiguation).

Vice is a practice, behavior, or habit generally considered immoral, sinful, criminal, rude, depraved, or degrading in the associated society. In more minor usage, vice can refer to a fault, a negative character trait, a defect, an infirmity, or a bad or unhealthy habit (such as an addiction to smoking). Vices are usually associated with a transgression in a person's character or temperament rather than their morality.[1] Synonyms for vice include fault, sin, depravity, iniquity, wickedness, and corruption.

The opposite of vice is virtue.[2]

The modern English term that best captures its original meaning is the word vicious, which means "full of vice". In this sense, the word vice comes from the Latin word vitium, meaning "failing or defect".[3]

(This meaning is completely separate from the word vice when used as an official title to indicate a deputy, substitute or subordinate, as in vice president, vice-chancellor or viceroy. The etymology of this usage derives from the Latin prefix vice-, meaning "in the place of".)

Depending on the country or jurisdiction, vice crimes may or may not be treated as a separate category in the criminal codes. Even in jurisdictions where vice is not explicitly delineated in the legal code, the term vice is often used in law enforcement and judicial systems as an umbrella for crimes involving activities that are considered inherently immoral, regardless of the legality or objective harm involved. 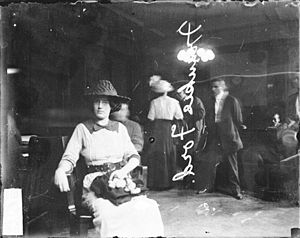 A 1912 portrait of Frankie Fore, sitting in a room during a vice quiz in Calumet City (formerly known as West Hammond), Illinois.
"Vice squad" redirects here. For other uses, see Vice squad (disambiguation).

A vice squad, also called a vice unit or a morality squad, is (though not always) a police division, whose focus is to restrain or suppress moral crimes. Though what is considered or accepted as a moral crime by society often varies considerably according to local laws or customs between nations, countries or states, it often includes activities such as gambling, narcotics, pornography and illegal sales of alcoholic beverages.[6] In certain parts of the Arab-speaking world, it often includes, for example, dress-codes, observance of store-closures during prayer time, consumption of unlawful beverages or foods, unrelated males and females socializing, and homosexual behavior, among others which is enforced by Islamic religious police units. Vice squads do not concentrate on crimes like fraud and murder.

In the Sarvastivadin tradition of Buddhism, there are 108 defilements, or vices, which are prohibited. These are subdivided into 10 bonds and 98 proclivities.[7] The 10 bonds are the following:[7] 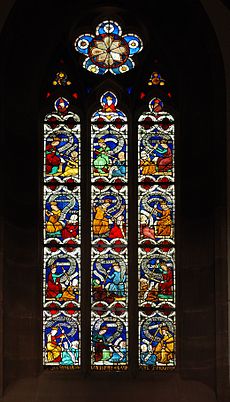 Christians believe there are two kinds of vice:[citation needed]

The first kind of vice, though sinful, is believed less serious than the second. Vices recognized as spiritual by Christians include blasphemy (holiness betrayed), apostasy (faith betrayed), despair (hope betrayed), hatred (love betrayed), and indifference (scripturally, a "hardened heart"). Christian theologians have reasoned that the most destructive vice equates to a certain type of pride or the complete idolatry of the self. It is argued that through this vice, which is essentially competitive, all the worst evils come into being. In Judeo-Christian creeds, it originally led to the Fall of Man, and, as a purely diabolical spiritual vice, it outweighs anything else often condemned by the Church.

The Roman Catholic Church distinguishes between vice, which is a habit of sin, and the sin itself, which is an individual morally wrong act. Note that in Roman Catholicism, the word "sin" also refers to the state that befalls one upon committing a morally wrong act. In this section, the word always means the sinful act. It is the sin, and not the vice, that deprives one of God's sanctifying grace and renders one deserving of God's punishment. Thomas Aquinas taught that "absolutely speaking, the sin surpasses the vice in wickedness".[8] On the other hand, even after a person's sins have been forgiven, the underlying habit (the vice) may remain. Just as vice was created in the first place by repeatedly yielding to the temptation to sin, so vice may be removed only by repeatedly resisting temptation and performing virtuous acts; the more entrenched the vice, the more time and effort needed to remove it. Saint Thomas Aquinas says that following rehabilitation and the acquisition of virtues, the vice does not persist as a habit, but rather as a mere disposition, and one that is in the process of being eliminated. Medieval illuminated manuscripts circulated with colorful schemas for developing proper attitudes, with scriptural allusions modelled on nature: the tree of virtues as blossoming flowers or vices bearing sterile fruit, The Renaissance writer Pietro Bembo is credited with reaffirming and promoting the Christian perfection of classical humanism. Deriving all from love (or the lack thereof) his[9] schemas were added as supplements[10] in the newly invented technology of printing by Aldus Manutius in his editions of Dante's Divine Comedy dating from early in the 16th century.

The poet Dante Alighieri listed the following seven deadly vices, associating them structurally[11] as flaws in the soul's inherent capacity for goodness as made in the Divine Image yet perverted by the Fall:

The Qu'ran and many other Islamic religious writings provide prohibitions against acts that are seen as immoral.

Ibn abi Dunya, a 9th-century scholar and tutor to the caliphs, described seven censures (prohibitions against vices) in his writings:[12]