From Infogalactic: the planetary knowledge core
Jump to: navigation, search
This is a Romance language name. The family name is "de la Paz", not "Paz".
In this Vietnamese name, the family name is Phạm. According to Vietnamese custom, this person should properly be referred to by the given name Liêm. 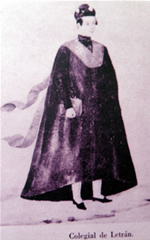 He was born Phạm Hiếu Liêm at Trà Lũ village, in the phủ of Thiên Trường, Nam Định Province, Tonkin in 1732 to Christian parents, Antonio and Monica Daeon de la Cruz[citation needed], members of the Tonkinese nobility. When he fell gravely ill several days after his birth, he was baptized by Fr. Chien de Santo Tomas, taking the name of Vicente Liem de la Paz. Since Trà Lũ was one of those Tonkinese villages where Dominican friars preached the Catholic faith, Liêm grew up to be a Christian. He was later brought by his parents to a missionary center where he learned catechism.

In 1738, King Philip V of Spain opened the Colegio de San Juan de Letran and the University of Santo Tomas (UST) in the Philippines to Chinese and Tonkinese students, since China and Tonkin did not have Christian educational institutions. The Dominican fathers decided to let Liêm and four other Tonkinese (Jose de Santo Tomas, Juan de Santo Domingo, Pedro Martir and Pedro de San Jacinto) study in the Philippines.

Vicente took the trivium and the quadrivium in Colegio de San Juan de Letran, now the equivalent of elementary and secondary education. He finished a degree of lector of humanities at Letran. He would pursue his collegiate education at the University of Santo Tomas while residing at Letran. In September 1753, after completing his studies at UST, he entered the Dominican order, along with his four Tonkinese companions. A year later, they made their solemn professions. On January 28, 1755, he received the tonsure and minor orders at the Church of Sta. Ana. In 1758 Liêm was ordained priest under the Dominican order. On September of that year, he passed the examinations to hear confessions. On October 3, he started his journey back to Tonkin. He arrived on January 20, 1759.

He spent time at Tonkin on evangelizing the Tonkinese people. However the Tonkinese authorities did not agree with this. On October 2, 1773, he and his two assistants were arrested at "Co Dou". He and his assistants were beaten up, after which they traveled on foot to the village of recorded as "Dou Hoi."[citation needed] There he met another Dominican priest, the Spaniard Jacinto Castañeda.[1] They were presented to the Vice Governor and to the Royal Minister. They were thrown to a cage for a night. The arrival of a High Minister prompted their transfer to Kien Nam,[where?] where the King held his court. While under detention, they still managed to preach Catholicism to the people. Later they were taken to Tan Cau, then to the house of Canh Thuy. Finally they were brought to the King where they were tried. Their trial led for the King to be angry and they were thrown to jail. After several days, the King brought down the guilty verdict with the penalty of beheading.[citation needed] The execution occurred on November 7, 1773. After the execution, the Christians who were present at the site carried away the bodies of de la Paz and Castañeda, where they were laid to rest at the town of Trung Linh in Xuan Truong, Nam Định. Several more Christian missionaries were put to death by the Tonkinese authorities.