The Vickers Varsity was a British twin-engined crew trainer operated by the Royal Air Force for 25 years from 1951.

The Varsity was developed by Vickers and based on the Viking and Valetta to meet Air Ministry Specification T.13/48 for a twin-engined training aircraft to replace the Wellington T10 and the Valetta T3 and T4.[2] The main differences were the wider-span wings, longer fuselage and tricycle undercarriage.There was also a ventral pannier to allow a trainee bomb aimer to lie in a prone position and a bomb bay with a capacity for 24 x 25lb smoke & flash bombs.[2] The prototype Type 668 first flew from Wisley on 17 July 1949.[2]

A civil version the VC.3 was planned but with the success of the VC.2 Viscount the idea was abandoned.[2] 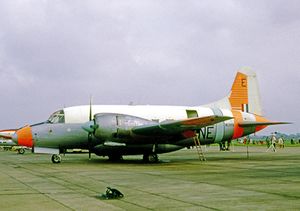 Varsity T.1 of the Royal Air Force College Cranwell in 1968.

The Varsity was introduced to replace the Wellington T10 trainer. Following deliveries to trials units the first production aircraft were delivered for operational use in 1951 to No. 201 Advanced Flying School at RAF Swinderby, where they were used to train pilots to fly multi-engined aircraft. It also equipped two Air Navigator Schools in 1952, and the Bomber Command Bombing school, with the job of training crews for RAF Bomber-Command's V-bomber crews.[3]

The Swedish Air Force operated a single Varsity from January 1953 to 1973 mainly for electronic intelligence missions. The Swedish military designation was Tp 82.

The Varsity was withdrawn from service with the RAF in May 1976, its role as a pilot and navigation trainer being taken over by the Scottish Aviation Jetstream T1.

The last flying example (Serial WL679) was operated by the Royal Aircraft Establishment; it was retired into preservation at the RAF Museum in 1992. 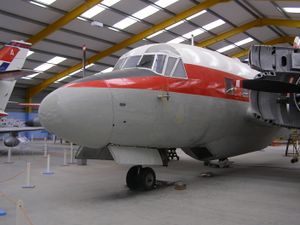 Varsity T1 on display at the Newark Air Museum 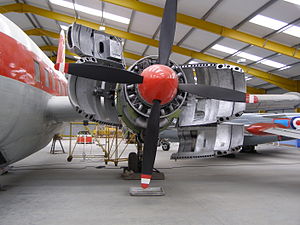 Varsity T1 on display at the Newark Air Museum

Stored or under restoration