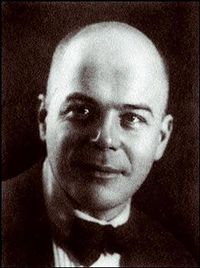 Shklovsky was born in St. Petersburg, Russia. His father was Jewish (with ancestors from Shklov) and his mother was of German/Russian origin. He attended St. Petersburg University.

During the First World War, he volunteered for the Russian Army and eventually became a driving trainer in an armoured car unit in St. Petersburg. There, in 1916, he founded OPOYAZ (Obshchestvo izucheniya POeticheskogo YAZyka—Society for the Study of Poetic Language), one of the two groups (with the Moscow Linguistic Circle) that developed the critical theories and techniques of Russian Formalism.

Shklovsky returned to St. Petersburg in early 1918, after the October Revolution. He opposed bolshevism and took part in an anti-bolshevik plot organised by members of the Socialist-Revolutionary Party. After the conspiracy was discovered by the Cheka, Shklovsky went into hiding, traveling in Russia and the Ukraine, but was eventually pardoned in 1919 due to his connections with Maxim Gorky, and decided to abstain from political activity. His two brothers were executed by the Soviet regime (one in 1918, the other in 1937) and his sister died from hunger in St. Petersburg in 1919.[1]

Shklovsky integrated into Soviet society and even took part in the Russian Civil War, serving in the Red Army. However, in 1922, he had to go into hiding once again, as he was threatened with arrest and possible execution for his former political activities, and he fled via Finland to Germany. In Berlin, in 1923, he published his memoirs about the period 1917–22 under the title Сентиментальное путешествие, воспоминания (Sentimental'noe puteshestvie, vospominaniia, A Sentimental Journey), alluding to A Sentimental Journey Through France and Italy by Laurence Sterne, an author he much admired and whose digressive style had a powerful influence on Shklovsky's writing. In the same year he was allowed to return to the Soviet Union, not least because of an appeal to Soviet authorities that he included in the last pages of his epistolary novel Zoo, or Letters Not About Love.

The Yugoslav scholar Mihajlo Mihajlov visited Shklovsky in 1963 and wrote: "I was much impressed by Shklovsky's liveliness of spirit, his varied interests and his enormous culture. When we said goodbye to Viktor Borisovich and started for Moscow, I felt that I had met one of the most cultured, most intelligent and best-educated men of our century."[2]

In addition to literary criticism and biographies about such authors as Laurence Sterne, Maxim Gorky, Leo Tolstoy, and Vladimir Mayakovsky, he wrote a number of semi-autobiographical works disguised as fiction, which also served as experiments in his developing theories of literature.

Shklovsky is perhaps best known for developing the concept of ostranenie or defamiliarization (also translated as "estrangement") in literature.[3] He explained the concept in the important essay "Art as Technique" (also translated as "Art as Device")[4] which comprised the first chapter of his seminal Theory of Prose, first published in 1925. He argued for the need to turn something that has become over-familiar, like a cliché in the literary canon, into something revitalized:[5]

The purpose of art is to impart the sensation of things as they are perceived and not as they are known. The technique of art is to make objects 'unfamiliar', to make forms difficult, to increase the difficulty and length of perception because the process of perception is an aesthetic end in itself and must be prolonged. Art is a way of experiencing the artfulness of an object; the object is not important.

Shklovsky's work pushes Russian Formalism towards understanding literary activity as integral parts of social practice, an idea that becomes important in the work of Mikhail Bakhtin and Russian and Prague School scholars of semiotics.[citation needed]

Shklovsky was one of the very early serious writers on film. A collection of his essays and articles on film was published in 1923 (Literature and Cinematography, first English edition 2008). He was a close friend of director Sergei Eisenstein and published an extensive critical assessment of his life and works (Moscow 1976, no English translation).

Beginning in the 1920s and well into the 1970s Shklovsky worked as a screenwriter on numerous Soviet films (see Select Filmography below), a part of his life and work that, thus far, has seen very limited attention. In his book Third Factory Shklovsky reflects on his work in film, writing: "First of all, I have a job at the third factory of Goskino. Second of all, the name isn't hard to explain. The first factory was my family and school. The second was Opoyaz. And the third – is processing me at this very moment."[6]