University of Melbourne Faculty of VCA and MCM

From Infogalactic: the planetary knowledge core
(Redirected from Victorian College of the Arts)
Jump to: navigation, search

The Faculty of the Victorian College of the Arts and Melbourne Conservatorium of Music (Faculty of VCA and MCM) is a faculty of the University of Melbourne, in Victoria (Australia). VCAMCM is located near the Melbourne central business district, on two campuses, one – the Melbourne Conservatorium of Music (MCM) – on the Parkville campus of the University of Melbourne, and the other – the Victorian College of the Arts (VCA) – on St Kilda Road, at Southbank.

Courses and training offered at the VCA cover six academic disciplines: fine art, dance,[1] drama, film and television, music and production, alongside the Centre for Ideas and The Wilin Centre for Indigenous Arts and Cultural Development. Degree programs specialising in music performance, composition, musicology, ethnomusicology, conducting, pedagogy and music therapy are taught at the Conservatorium, which also runs an Early Music Studio, and oversees the publishing house Lyrebird Press. Both campuses offer graduate programs including certificates and diplomas, and research and coursework awards at the masters and doctoral levels.

The library on the Southbank campus is known as the Lenton Parr Music, Visual and Performing Arts Library, whilst that at Parkville is the Louise Hanson-Dyer Music Library.

History of the VCA and MCM

The Faculty of the VCA and Music was created in 2009 from the amalgamation of the University's Faculty of Music (founded as the University Conservatorium in 1895) and Faculty of the Victorian College of the Arts.[2] Founded in 1972, the VCA integrated into the University of Melbourne in 2007 as a separate faculty. Due to dissatisfaction – particularly from students of the old VCA – with the structural changes imposed by the University, in November 2009 former Telstra CEO Ziggy Switkowski was appointed to Chair a review. A number of his recommendations were adopted, resulting in the resignation of the inaugural Dean,[3] abandonment of the previous push for full amalgamation, the creation of the present divisional structure with a more centralised administration and two relatively distinct teaching entities at the Parkville and Southbank campuses,[4] and a change in the title of the head of the two divisions to Director. The appointment of a new Dean under this new structure, occurred in 2011.[5]

This was not the first time, however, that sharing of resources across two institutions had been attempted. In 1974, at the time of the establishment of the VCA School of Music, the original entity called the University Conservatorium was finally unincorporated. Symbolically as well as in practice, the central place of instrumental tuition at the Faculty was removed to the new VCA and replaced with a more academic syllabus.[6] Between 1975 and 1981, the teaching of most woodwind, some brass, double bass and guitar was undertaken by VCA staff at the Southbank campus.

Although much work has been done to ensure the autonomy of the VCA, the economic climate of the late 1980s led to a full amalgamation of the VCA and the Faculty of Music that took effect on 1 July 1991. The new organisation was known as the Faculty of Music, Visual and Performing Arts. John Poynter was appointed as Dean of the new super faculty. In September, Warren Bebbington was appointed to the vacant Ormond Chair and, at the urging of staff on both sides, worked to reverse the amalgamation, which was effected in 1994.[7]

On 1 January 2012 the Faculty's name was changed to reflect the two operating divisions and is now known as the Faculty of the Victorian College of the Arts and Melbourne Conservatorium of Music (Faculty of the VCA and MCM).

Deans of the Faculty of the VCA and Music

History of the Melbourne Conservatorium of Music

The teaching of music at the University of Melbourne has been undertaken under a number of administrative structures. The first award of a degree in music (a MusBac) was recorded in 1879,[2] and the first Chair of Music, endowed by Francis Ormond – known as the Ormond Professor of Music - was occupied from 1891, even though there was not yet a department or faculty of music at the University. Through the efforts of the first Ormond Professor, G.W.L. Marshall-Hall, this was rectified in 1894 with the founding of the University Conservatorium, whose leased premises were located in the Queen's Coffee Palace, a six-storey building on the corner of Rathdowne and Victoria Streets, Carlton.[8]

The various names that have been used during the music department's history are:

The foundation stone for a permanent Conservatorium in Royal Parade, on the University campus, was laid by Dame Nellie Melba on 26 November 1909, and the building, designed by Bates, Peebles & Smart, was opened in 1913. Assisted by a donation of £1,000 from a benefit concert arranged by Melba,[9] which was matched by the Victorian State Government, the concert room now known as Melba Hall was added and opened by the Governor-General, Lord Denman, on 29 October 1913.

The Conservatorium became the Faculty of Music within the University of Melbourne in 1926, and the first Dean was appointed. This was to be the administrative structure for the next 65 years.

Directors of the University Conservatorium

Deans of the Faculty of Music

Head of the School of Music within the Faculty of Music, Visual and Performing Arts

Deans of the Faculty of Music (re-instituted)

Directors of the Melbourne Conservatorium of Music

Notable alumni and faculty of the Conservatorium

History of the Victorian College of the Arts

The Victorian College of the Arts (VCA) was established in 1972 by a government order under the Victorian Institute of Colleges Act 1955, initiated by the Premier of Victoria and Minister for the Arts Rupert Hamer. Subsequently, in 1973 the VCA was affiliated as a college of advanced education with the Victorian Institute of Colleges. The National Gallery of Victoria Art School, founded in 1867 to teach fine art, was the VCA's foundation school. This was followed by the establishment of the School of Music in 1974, the School of Drama in 1976, the School of Dance in 1978 and Film and Television (1992). 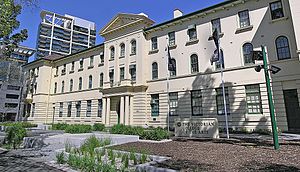 The Elisabeth Murdoch Building at the VCA on St Kilda Road

Also in 1978, the Victorian Education Department under the direction of the Deputy Premier and Minister of Education Lindsay Thompson established the Victorian College of the Arts Technical School, a government secondary school for dancers and musicians (see VCASS)in close association with the VCA and located on the same campus.

Lacy laid out a rationale for the re-constitution of the College under a VCA specific Act which was derived firstly "from the quite specific demands and circumstances of preparing young artists for professional practise." He asserted that "the basic concept upon which the college is built is that young artists intending to enter careers as practitioners in their various fields are best assisted to achieve their ambitions in a milieu of continuous artistic activity and endeavour of a fully professional nature. To the extent that artistic education is separated from normal professional practice it is so much less effective." Secondly, the rationale related to the adjacent location of the VCA campus to the National Gallery of Victoria and the Victorian Arts Centre. He said that this "Greater Arts Centre concept is central to the Government's decision to reconstitute the college by separate statute as well as to the development of the arts in general. It represents a simple, readily achievable and highly effective means of creating a substantial milieu of continuous professional activity of the highest standards. It also has ramifications which extend far beyond the college and its partner institutions. Its implementation will shape and invigorate the arts in many ways and lead to a dynamic, cultural and social facility without peer in Australia" and that it "afforded an unparalleled opportunity and challenge to present total programmes in the arts which should encourage creative exchanges between the art forms, give inspiration to students of the arts and provide for the public an experience which few places in the world can match."[10] The Government therefore believed that the VCA's role was substantially different from other educational institutions.[10] 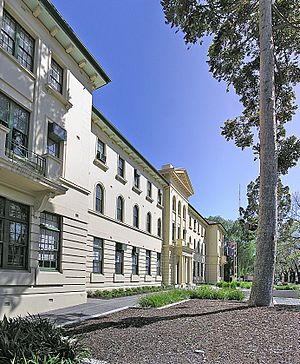 On 1 January 1992 further expansion of the college took place when the fine arts programs of the former Faculty of Art and Design, Victoria College (formerly Prahran College of Advanced Education), were incorporated into the School of Art.

At the same point in time in 1992 the Swinburne Film and Television School, established as Australia's first Film school in 1966, also transferred to the VCA.[11] The VCA School of Film and Television remained at Hawthorn until 1 July 1994 when it moved into a purpose-built federally funded building on the VCA campus at Southbank.

With the University requiring the VCA to introduce its Melbourne Model course structure,[12] necessitating a reduction in the amount of hands-on arts training that students receive, critics feared that future students might be unable to find employment upon graduation. Staff of the former VCA accused the Dean, Sharman Pretty, of having "little or no recognition of the need for focused arts training, or any esteem for the arts themselves,"[13] and the University of Melbourne of trying to mislead the public about the effects.[14] Students were also fearful a reduction in the quality of education and programs on offer whilst the school remained under the University of Melbourne.[15]

In 2014 a $42.5 million project to expand and improve the VCA was announced. Supported chiefly by the Victorian Government and The University of Melbourne, the initiative aims to both "ensure that the VCA maintains its high standards in arts training and research" and "open up the campus to the wider community". A portion of the funding is to be spent acquiring and redeveloping the nearby Dodds Street Stables of the Victoria Police mounted branch. Major contributors include the Myer Foundation, the Ian Potter Foundation and Martyn and Louise Myer, their combined donation totalling $10 million. The project is expected to be completed by 2016.[16][17]

Deans or Heads of the VCA

The policy of the VCA has always been to enroll only those students who demonstrate the talent and dedication essential for courses as practising artists and performers. Similarly, members of the academic staff, including the Director and the Dean of each school, have themselves been accomplished and practising artists.[18]

Directors of the VCA

Notable alumni of the VCA

School of Film and Television