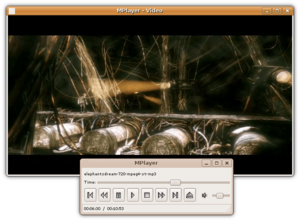 MPlayer, an example of a cross-platform media player

A media player is a computer program for playing multimedia files. Media players display standard media control icons known from physical devices such as tape recorders and CD players, such as Play ( 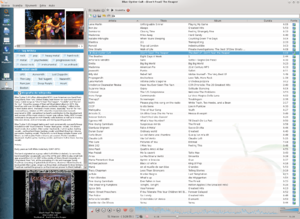 Clementine v1.2, an audio player with a media library and online radio

Different media players may have different goals and feature sets. Video players are a group of media players that have their features geared more towards playing digital video. For example, Windows DVD Player exclusively plays DVD-Video discs and nothing else. Media Player Classic can play individual audio and video files but many of its features such as color correction, picture sharpening, zooming, set of hotkeys, DVB support and subtitle support are only useful for video material such as films and cartoons. Audio players, on the other hand, specialize in digital audio. For example, AIMP exclusively plays audio formats. MediaMonkey can play both audio and video format but many of its features including media library, lyric discovery, music visualization, online radio, audiobook indexing and tag editing are geared toward consumption of audio material. In addition, watching video files on it can be a trying feat. General-purpose media players also do exist. For example, Windows Media Player has exclusive features for both audio and video material, although it cannot match the feature set of Media Player Classic and MediaMonkey combined.

3D video players are used to play 2D video in 3D format. A high-quality three-dimensional video presentation requires that each frame of a motion picture be embedded with information on the depth of objects present in the scene. This process involves shooting the video with special equipment from two distinct perspectives or modelling and rendering each frame as a collection of objects composed of 3D vertices and textures, much like in any modern video game, to achieve special effects. Tedious and costly, this method is only used in a small fraction of movies produced worldwide, while most movies remain in the form of traditional 2D images. It is, however, possible to give an otherwise two-dimensional picture the appearance of depth. Using a technique known as anaglyph processing a "flat" picture can be transformed so as to give an illusion of depth when viewed through anaglyph glasses (usually red-cyan). An image viewed through anaglyph glasses appears to have both protruding and deeply embedded objects in it, at the expense of somewhat distorted colours. The method itself is old enough, dating back to mid-19th century, but it is only with recent advances in computer technology that it has become possible to apply this kind of transformation to a series of frames in a motion picture reasonably fast or even in real time, i.e. as the video is being played back. Several implementations exist in the form of 3D video players,[1][2] that render conventional 2D video in anaglyph 3D, as well as in the form of 3D video converters,[3][4][5] that transform video into stereoscopic anaglyph and transcode it for playback with regular software or hardware video players.

A home theater PC or media center computer is a convergence device that combines some or all the capabilities of a personal computer with a software application that supports video, photo, audio playback, and sometimes video recording functionality. Although computers with some of these capabilities were available from the late 1980s, the "Home Theater PC" term first appeared in mainstream press in 1996. Since 2007, other types of consumer electronics, including gaming systems and dedicated media devices have crossed over to manage video and music content. The term "media center" also refers to specialized computer programs designed to run on standard personal computers.[6]