The Vienna Convention on Consular Relations of 1963 is an international treaty that defines a framework for consular relations between independent countries. A consul normally operates out of an embassy in another country, and performs two functions: (1) protecting in the host country the interests of their countrymen, and (2) furthering the commercial and economic relations between the two countries. While a consul is not a diplomat,[citation needed] they work out of the same premises, and under this treaty they are afforded most of the same privileges, including a variation of diplomatic immunity called consular immunity. The treaty has been ratified by 177 countries.[1]

The treaty is an extensive document, containing 79 articles. Following is a basic overview of its key provisions. For a comprehensive enumeration of all articles, consult the original text.[2] 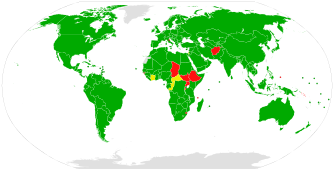 There are 177 state parties to the convention including most UN member states and UN observer states Holy See and State of Palestine. The signatory states that have not ratified the convention are: Central African Republic, Israel, Ivory Coast and Republic of Congo. The UN member states that have neither signed nor ratified the convention are: Afghanistan, Burundi, Chad, Comoros, Guinea-Bissau, Ethiopia, Palau, San Marino, Sierra Leone, Solomon Islands, South Sudan, Swaziland, Uganda, Zambia.

Application of the treaty by the United States

In March 2005, the United States pulled out of the Optional Protocol to the Convention, which allows the International Court of Justice to have compulsory jurisdiction over disputes arising under the Convention. In June 2006, the United States Supreme Court ruled that foreign nationals who were not notified of their right to consular notification and access after an arrest may not use the treaty violation to suppress evidence obtained in police interrogation or belatedly raise legal challenges after trial (Sanchez-Llamas v. Oregon[1]). In March 2008, the Supreme Court further ruled that the decision of the International Court of Justice directing the United States to give "review and reconsideration" to the cases of 51 Mexican convicts on death row was not a binding domestic law and therefore could not be used to overcome state procedural default rules that barred further post-conviction challenges (Medellín v. Texas [2]).

In 1980, prior to its withdrawal from the Optional Protocol, the U.S. brought a case to the ICJ against Iran in response to the seizure of United States diplomatic offices and personnel by militant revolutionaries.[3]