The Vienna Convention on Diplomatic Relations of 1961 is an international treaty that defines a framework for diplomatic relations between independent countries. It specifies the privileges of a diplomatic mission that enable diplomats to perform their function without fear of coercion or harassment by the host country. This forms the legal basis for diplomatic immunity. Its articles are considered a cornerstone of modern international relations. As of April 2014, it has been ratified by 190 states.[1]

Throughout the history of sovereign states, diplomats have enjoyed a special status. Their function to negotiate agreements between states demands certain special privileges. An envoy from another nation is traditionally treated as a guest, their communications with their home nation treated as confidential, and their freedom from coercion and subjugation by the host nation treated as essential.

The first attempt to codify diplomatic immunity into diplomatic law occurred with the Congress of Vienna in 1815. This was followed much later by the Convention regarding Diplomatic Officers (Havana, 1928).

The present treaty on the treatment of diplomats was the outcome of a draft by the International Law Commission. The treaty was adopted on 18 April 1961, by the United Nations Conference on Diplomatic Intercourse and Immunities held in Vienna, Austria, and first implemented on 24 April 1964. The same Conference also adopted the Optional Protocol concerning Acquisition of Nationality, the Optional Protocol concerning the Compulsory Settlement of Disputes, the Final Act and four resolutions annexed to that Act.

The treaty is an extensive document, containing 53 articles. Following is a basic overview of its key provisions.[2]

In the same year that the treaty was adopted, two amendment protocols were added. Countries may ratify the main treaty without necessarily ratifying these optional agreements. 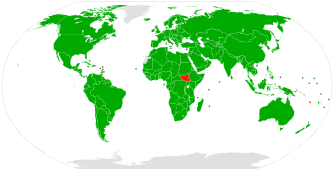 As of April 2014, there are 190 state parties to the convention[1] including all UN member states except Antigua and Barbuda, Republic of Palau, Solomon Islands, South Sudan and Republic of Vanuatu, as well as UN observer states Holy See and State of Palestine. The Republic of China signed and ratified the Vienna Convention on Diplomatic Relations on 18 April 1961 and 19 December 1969 respectively prior to the UN granting China's seat to the People's Republic of China. There are no states that have signed the treaty but have not ratified it.