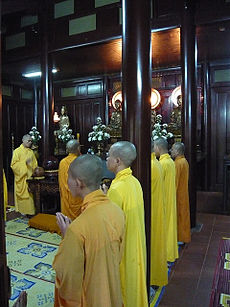 According to traditional accounts of Vietnam, in 580, an Indian monk named Vinītaruci (Vietnamese: Tì-ni-đa-lưu-chi) traveled to Vietnam after completing his studies with Sengcan, the third patriarch of Chinese Chán. This, then, would be the first appearance of Vietnamese Thiền Buddhism.

The sect that Vinītaruci and his lone Vietnamese disciple founded would become known as the oldest branch of Thiền. After a period of obscurity, the Vinītaruci School became one of the most influential Buddhist groups in Vietnam by the 10th century, particularly so under the patriarch Vạn-Hạnh (died 1018).

Other early Vietnamese Thiền schools included that of Wu Yantong, called Vô Ngôn Thông in Vietnamese, which was associated with the teaching of Mazu Daoyi, and the Thảo Đường, which incorporated nianfo chanting techniques; both were founded by Chinese monks. A new school was founded by one of Vietnam's religious kings; this was the Trúc Lâm school, which evinced a deep influence from Confucian and Taoist philosophy. Nevertheless, Trúc Lâm's prestige waned over the following centuries as Confucianism became dominant in the royal court.

In the 17th century, a group of Chinese monks led by Nguyên Thiều established a vigorous new school, the Lâm Tế, which is the Vietnamese pronunciation of Linji. A more domesticated offshoot of Lâm Tế, the Liễu Quán school, was founded in the 18th century and has since been the predominant branch of Vietnamese Thiền.

Thiền master Thích Thanh Từ is credited for renovating Trúc Lâm in Vietnam. He is one of the most prominent and influential Thiền masters currently alive. He was a disciple of Master Thích Thiện Hoa.

The most famous practitioner of syncretized Thiền Buddhism in the West is Thích Nhất Hạnh who has authored dozens of books and founded Dharma center Plum Village in France together with his colleague, Thiền Master bhikkhuni Chân Không.

Point of the Vietnamese Thiền doctrine

Bodhidharma laid the foundation to formation of four principles of Chan Buddhism, the general for all schools which came from it:[1]

One of the basic concepts of Thiền is a concept "(Tathāgata) of "thus coming". The term is often thought to mean either "one who has thus gone" (tathā-gata) or "one who has thus come" (tathā-āgata). This is interpreted as signifying that the Tathāgata is beyond all coming and going – beyond all transitory phenomena.[4]