From Infogalactic: the planetary knowledge core
Jump to: navigation, search
For assistance with IPA transcriptions of Vietnamese for Wikipedia articles, see Help:IPA for Vietnamese.

This article is a technical description of the sound system of the Vietnamese language, including phonetics and phonology. Two main varieties of Vietnamese, Hanoi and Ho Chi Minh City, are described below.

In the Saigonese dialect, all initial consonant + /w/ clusters have been reduced:[3]

In Hanoian Vietnamese, d, gi and r are all pronounced [z], while x and s are both pronounced [s]. The table below summarizes these sound correspondences:

The IPA chart of vowel nuclei to the right is based on the sounds in Hanoi Vietnamese, (i.e., other regions of Vietnam may have different inventories). Vowel nuclei consist of monophthongs (i.e., simple vowels) and three centering diphthongs.

In Vietnamese, vowel nuclei are able to combine with offglides /j/ or /w/ to form closing diphthongs and triphthongs. Below is a chart[6] listing the closing sequences of general northern speech.

Thompson (1965) says that in Hanoi, words spelled with ưu and ươu are pronounced /iw, iəw/, respectively, whereas other dialects in the Tonkin delta pronounce them as /ɨw/ and /ɨəw/. Hanoi speakers that do pronounce these words with /ɨw/ and /ɨəw/ are using only a spelling pronunciation.

When the velar consonants /k, ŋ/ follow [w] (Hanoi) or /u, o/ (Saigon), they are articulated with a simultaneous bilabial closure [k͡p̚, ŋ͡m] (i.e. doubly articulated) or are strongly labialized [kʷ̚, ŋʷ].

Old Vietnamese rimes ending with velar consonants have been diphthongized in the Hanoian dialect:[7]

The monophthongal variants are now mainly heard in the Nghệ An, Hà Tĩnh and a few South Central Coast dialects, and have been diphthongized in most Northern varieties.

Another analysis has final ⟨ch⟩ and ⟨nh⟩ as representing predictable allophonic variants of the velar phonemes /k/ and /ŋ/ that occur after upper front vowels /i/ (orthographic ⟨i⟩) and /e/ (orthographic ⟨ê⟩). This analysis interprets orthographic ⟨ach⟩ and ⟨anh⟩ as an underlying /ɛ/, which becomes phonetically open and diphthongized: /ɛk/ → [ăjk̟], /ɛŋ/ → [ăjŋ̟].[8]

Arguments for the second analysis include the limited distribution of final [c] and [ɲ], the gap in the distribution of [k] and [ŋ] which do not occur after [i] and [e], the pronunciation of ⟨ach⟩ and ⟨anh⟩ as [ɛc] and [ɛɲ] in certain conservative central dialects,[7] and the patterning of [k]~[c] and [ŋ]~[ɲ] in certain reduplicated words. Additionally, final [c] is not usually articulated as far forward as the initial [c]: [c] and [ɲ] are pre-velar [k̟, ŋ̟].

The first analysis closely follows the surface pronunciation of a slightly different Hanoi dialect than the second. In this dialect, the /a/ in /ac/ and /aɲ/ is not diphthongized but is actually articulated more forward, approaching a front vowel [æ]. This results in a three-way contrast between the rimes ăn [æ̈n] vs. anh [æ̈ɲ] vs. ăng [æ̈ŋ]. For this reason, a separate phonemic /ɲ/ is posited.

While the variety of Vietnamese spoken in Hanoi has preserved finals faithfully from old Vietnamese, the variety spoken in Saigon has drastically changed its finals. There were two steps in the development of rimes in the Saigonese dialect from old Vietnamese. In the first step, -ch and -nh merged with -t and -n, while rimes ending in /t, n/ except after /i, e/ merged with /k, ŋ/. In the second step, vowels in alveolar rimes became centralized,[9] analogous to the diphthongization in the Hanoian dialect.

Below is a table of rimes ending in /n, t, ŋ, k/ for the Hanoian dialect:

Vietnamese vowels are all pronounced with an inherent tone. Tones differ in

Unlike many Native American, African, and Chinese languages, Vietnamese tones do not rely solely on pitch contour. Vietnamese often uses instead a register complex (which is a combination of phonation type, pitch, length, vowel quality, etc.). So perhaps a better description would be that Vietnamese is a register language and not a "pure" tonal language.[10]

In Vietnamese orthography, tone is indicated by diacritics written above or below the vowel.

The six tones in the Hanoi and other northern varieties are: 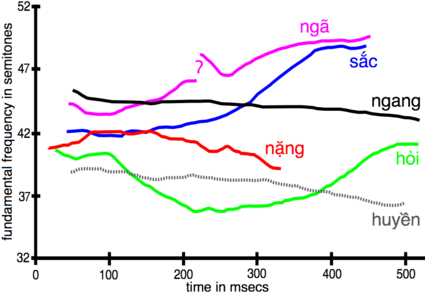 Northern Vietnamese (non-Hanoi) tones as uttered by a male speaker in isolation. From Nguyễn & Edmondson (1998)

Hanoi tones as uttered by a female speaker in isolation. From Nguyễn & Edmondson (1998)

Hanoi tones as uttered by a different female speaker in isolation. From Nguyễn & Edmondson (1998)

The Southern variety is similar through all tones except for the nặng tone, which is pronounced [˨˧]. Many of those speaking Southern dialects will omit using the ngã tone and replace it with the hỏi tone.

North-central and Central Vietnamese varieties are fairly similar with respect to tone although within the North-central dialect region there is considerable internal variation.

It is sometimes said (by people from other provinces) that people from Nghệ An pronounce every tone as a nặng tone.

An older analysis assumes eight tones rather than six.[12] This follows the lead of traditional Chinese phonology. In Middle Chinese, normal syllables allowed for three tonal distinctions, but syllables ending with /p/, /t/ or /k/ had no tonal distinctions. Rather, they were consistently pronounced with in a short high tone, which was called the entering tone and considered a fourth tone. Similar considerations lead to the identification of two additional tones in Vietnamese for syllables ending in /p/, /t/, /k/ or /c/. These are not phonemically distinct, however, and hence not considered as separate tones by modern linguists.

According to Hannas (1997), there are 4,500 to 4,800 possible spoken syllables (depending on dialect), and the standard national orthography (Quốc Ngữ) can represent 6,200 syllables (Quốc Ngữ orthography represents more phonemic distinctions than are made by any one dialect).[13]

In other words, a syllable can have an optional consonant onset, an optional on-glide /w/ (Hanoi only), and an optional coda. The vowel nucleus may have an additional off-glide.

More explicitly, the syllable types are as follows:

Any consonant may occur in as an onset with the following exceptions:

G: The offglide may be /j/ or /w/. Together, V and G must form one of the diphthongs or triphthongs listed in the section on Vowels. The offglide cannot be /w/ if the syllable contains a /w/ onglide, except for case of 'khuỷu (tay)' (elbow).

Below is a table comparing four linguists' different transcriptions of Vietnamese vowels as well as the orthographic representation. Notice that this article mostly follows Han (1966), with the exception of marking short vowels short.

Thompson (1965) says that the vowels [ʌ] (orthographic â) and [ɐ] (orthographic ă) are shorter than all of the other vowels, which is shown here with the length mark [ː] added to the other vowels. His vowels above are only the basic vowel phonemes. Thompson gives a very detailed description of each vowel's various allophonic realizations.

Han (1966) uses acoustic analysis, including spectrograms and formant measuring and plotting, to describe the vowels. She states that the primary difference between orthographic ơ & â and a & ă is a difference of length (a ratio of 2:1). ơ = /ɜː/, â = /ɜ/; a = /ɐː/, ă = /ɐ/. Her formant plots also seem to show that /ɜː/ may be slightly higher than /ɜ/ in some contexts (but this would be secondary to the main difference of length).

Another thing to mention about Han's studies is that she uses a rather small number of participants and, additionally, although her participants are native speakers of the Hanoi variety, they all have lived outside of Hanoi for a significant period of their lives (i.e. in France or Ho Chi Minh City).

Nguyễn (1997) has a simpler, more symmetrical description. He says that his work is not a "complete grammar" but rather a "descriptive introduction." So, his chart above is more a phonological vowel chart rather than a phonetic one.