From Infogalactic: the planetary knowledge core
Jump to: navigation, search
This article is about a period of intentional sleeplessness. For all other usages, see Vigil (disambiguation). 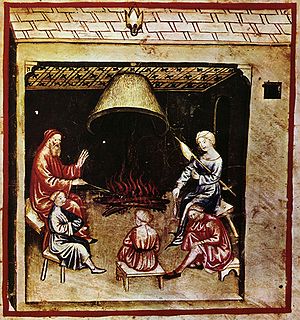 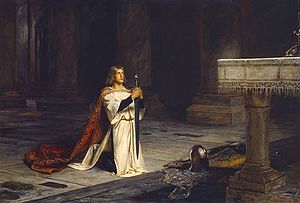 "A Knight's Vigil" by John Pettie

A vigil, from the Latin vigilia meaning wakefulness (Greek: pannychis,[1] παννυχίς or agrypnia[2] ἀγρυπνία),[3] is a period of purposeful sleeplessness, an occasion for devotional watching, or an observance. The Italian word vigilia has become generalized in this sense and means "eve" (as in on the eve of the war).

A vigil may be held on the eve of a major religious festival (feast days), observed by remaining awake—"watchful"—as a devotional exercise or ritual observance on the eve of a holy day.[4] Such liturgical vigils usually consist of psalms, prayers and hymns, possibly a sermon or readings from the Holy Fathers, and sometimes periods of silent meditation.

Most likely the best known vigil is the Easter Vigil held at night between Holy Saturday and Resurrection Sunday.

In the Eastern Orthodox Church an All-Night Vigil (consisting of Great Vespers, Matins and the First Hour) is held on the eves of Sundays and all Major Feast Days (such as the Twelve Great Feasts and the Feast Days of important Saints) during the liturgical year.

Vigils are also commonly observed on Holy Days in the Anglican, Lutheran and Methodist Churches.[5]

Vigils at the time of death

When a Jew dies, a watch is kept over the body and Tehillim are recited constantly, until the burial service.

In Christianity, especially the Eastern Orthodox and Roman Catholic traditions, a vigil is often held when someone is gravely ill or mourning. Prayers are said and votives are often made. Vigils extend from eventual death to burial, ritualistically to pray for a loved one, but more so their body is never left alone.

During the Middle Ages, a squire on the night before his knighting ceremony was expected to take a cleansing bath, fast, make confession, and then hold an all-night vigil of prayer in the chapel, preparing himself in this manner for life as a knight. For the knighting ceremony, he dressed in white as a symbol for purity and over that was placed a red robe to show his readiness to be wounded.