Viktor Astafyev was born in the village of Ovsyanka, Krasnoyarsk Krai on the bank of the Yenisei river.[1] His father, Pyotr Pavlovich Astafyev, was a son of a relatively rich mill-owner (a part-time hunter who most of his time though spent at home), mother Lydia Ilyinichna Astafyeva (née Potylitsyna) came from a peasant family. In his 2000 autobiography[2] Viktor Astafyev remembered his father's household as a place where men, led by grandfather Pavel Yakovlevich, were on continuous binge, while all the work was being organized and done by two women, Lydia and her mother-in-law, Maria Osipova, Pavel Yakovlevich's young second wife.[3]

In 1931 two tragedies struck. First Pyotr, Pavel and the latter's father (Astafyev grand-grandfather) Yakov Maximovich were arrested as part of the Dekulakization campaign and sent to a Siberian labour camp. In July 1931 Lydia Ilyinichna, Viktor's mother drowned in Yenisey as the boat which she was rowing, carrying food to the Krasnoyarsk prison where her arrested husband was kept, got upturned. That year Pyotr Astafyev received 5 years of prison as the "Enemy of the people" and was sent to the infamous Belomorkanal building-site. Seven-year-old Viktor found himself in the house of Yekaterina Petrovna and Ilya Yevgrafovich Potylitsyns, his mother’s parents who’s given the boy all their love and care. In 1932 he joined a local primary school. His life in the early 1930s Astafyev later described in his book of short stories The Last Respect (Posledny Poklon, 1968).[3]

In 1934 Pyotr Astafyev returned from labour camp and married again. He took Viktor to his new place, a small forest village Sosnovka, then in 1935 moved the family to Igarka where they settled as spetspereselentsy. Ignored by both his stepmother Taisiya Tcherkasova (who’s by now given birth to her own son, Nikolai) and father, the boy rioted and soon found himself on the street, homeless. In 1937 he was taken in an orphanage and joined the 5th form of its special school which years later he remembered with great affection. Two of the teachers, Rozhdestvensky and Sokolov, noticed artistic and literary abilities in the boy who by this time started to write poetry, and did a lot to encourage him.[3] Years later he remembered:

Critics for some reason tend to feel sorry for me and difficult childhood that I had. This vex me a lot. More than that... given such a chance, I’d have chosen the very same life, full of things, happiness, victories and defeats. The latter only help to see the world better, to feel kindness deeper. There would have been just one thing I'd have changed – asked the fate to keep mother with me. [Long pause] Orphanage, wandering, the boarding school – all this I had to live through in Igarka. But there were other things – books and songs, skiing trips, childhood happiness, first tears of epiphany... It was there that for the first time I've heard the radio, the gramophone, the brass orchestra... And it was in Igarka that I wrote my first ever short story which my teacher Rozhdestvensky published in our school's self-edited journal. And the newspaper Bolshevik Zapolyarya published my 4-line verse.[3]

On 1 May 1941, Astafyev graduated from the school and joined a brickyard as a transport worker. As the Great Patriotic War broke out, he was working in the Kureika station, a manual worker at local village Soviet. In August he left Igarka and joined the newly formed Railway school in Krasnoyarsk which he graduated in June 1942.[3]

In October 1942 Astafyev volunteered for the Soviet Army and, after six months spent in reserve units (first in Berdsk, then in Novosibirsk) in April 1943 was moved to Kaluga region as a soldier of the 92nd Howitzer brigade of the Kiev-Zhitomir division. In May Astafyev went into action, taking part in fierce fighting at the Bryansk, Voronezh and Steppe Fronts. In October he was injured while force-crossing Dnieper (that was where and when he lost his right eye)[4] and on 25 November received his first award, For Courage medal. In January 1944 he returned to action, took part first in Korsun-Shevchenko operation, then (in March and April) in the Kamenets-Podolsky assault and on 25 April was awarded the Order of the Red Star.[3]

On 17 September 1944, Astafyev was heavily injured near Polish town of Dukla and spent the next 8 months in hospitals. "Since then I was unfit for an active service and was drifting from one reserve unit to another until I settled at the postal point of the 1st Ukrainian Front nearby Zhmerinka station. Here I met a fellow soldier, Maria Semyonovna Koryakina, married her after demobilization and went with her to her place in the town of Chusovoy of the Perm (then Molotov) oblast," he wrote in autobiography.[2]

The horrible experience of war has remained with Astafyev forever, becoming the major incentive to become a writer. "About the War... what do I know? Everything and nothing. I was a common soldier and we had our own, soldiers' truth. One rather glib author called it derogatively 'the truth from the trenches' and our 'point of view' – a 'hillock view'[note 1]… But I felt like I had to tell about the everyday side of the war, of how the trenches smelt, of the way people there lived... The first killed, one of us. The first one you've killed. I had to write of all the monstrous things I've seen," he said years later in an interview.[5]

After his discharge in 1945 Astafyev settled for a while in his wife's parents' house in Chusovoy, then went to Krasnoyarsk, doing various jobs such as locksmith and smelter. In 1950 he started contributing to the Tchusovsky Rabochy (The Tchusovoy Worker) newspaper which in February 1951 published his debut short story "A Civil Man" (Grazhdansky tchelovek), which two years later was reprinted by the Perm-based Zvesda newspaper. In 1954 Astafyev was for the first time published by a Moscow magazine (short story "Splinter", in Smena). In 1955 he left the newspaper and started working upon his first novel Snows are Melting (Tayut Snega) which was published in 1958, as was his first book of short stories Warm Rain (Tyoply Dozhd), dedicated mostly to the experience of Russian soldiers and civilians during the German-Soviet War. Also in the late 1950s Astafyev joined the regional Perm radio. Working there provided relatively good wages but involved too much blatant propaganda. "I decided to quit after 1,5 years, feeling that otherwise I'd just stop respecting myself altogether," he remembered.[6] On 1 October 1958 Astafyev became the member of the RSFSR Union of Writers.[3]

1959 saw Astafyev coming to Moscow where he joined there the High Literary courses, striking friendships with Sergey Vikulov, Yevgeny Nosov and a group of Vologda authors. One of several short novels of this period, The Old Oak (Starodub, 1960), became Astafyev's first European publication: translated into Czech, in 1963 it was published in Prague. After 1962 Astafyev became a professional writer, his wife Maria helping out as a typist.[note 2][3]

In 1969 Astafyev and his family moved to the city of Vologda where most of his literary friends lived. Several major books – Notches (Zatesi), Mountain Pass, The Last Respect (book 1), Shepherd and His Wife followed in the early 1970s and won Astafyev (now the Order of the Red Banner of Labour two-times chevalier) the RSFSR State Maxim Gorky Prize in December 1975. A year later Nash Sovremennik published "The Tsar Fish", one of his most famous short stories (which gave the title to the compilation). His debut play The Bird-Cherry Tree was premiered at the Moscow Yermolova theatre, also in 1976. On 19 October 1978, for the Tsar-Fish book Astafyev received the USSR State Prize.[3]

In 1981 the first edition of The Complete Astafyev in 4 volumes came out. By this time the author bought himself a house in his native Ovsyanka and moved his family to Krasnoyarsk. The first TV documentary (shot by director M.Litvyakov) "Viktor Astafyev" was shown in 1983. By 1984 four films based on his work came out, including Falling Stars by Igor Talankin and Arkady Sirenko's Born Twice, the latter featuring Astafyev as a scriptwriter. Great resonance had his novel Sad Detective (1986), as well as a set of 1987 short stories, including controversial "The Catching of Cudgeons in Georgia". In 1988–1989 Astavyev visited France (where his Sad Detective was published), Bulgaria (to oversee his 1966 short novel The Theft being screened) and Greece and took part in the 1989 Congress of People's Deputies of the Soviet Union. The epic novel The Cursed and the Slain (Proklyaty i Ubity, books 1 and 2, 1992–1993) brought Astafyev The State Prize of the Russian Federation in May 1996. The same month Russian President Boris Yeltsin visited Ovsyanka to meet Astafyev. In 1998 the 15-volumes Krasnoyarsk edition of The Complete Astafyev came out.[3]

Astafyev's last years were not happy ones. In 2000 he suffered a stroke. Not long before his death Astafyev wrote his last words: "I entered the world that was kind and open and I loved it wholeheartedly. I leave the world which is alien, evil and vile and I have nothing to say to all of you by way of farewells."[7] Viktor Astafyev died on 29 November 2001, in Krasnoyarsk. He was buried in his native Ovsyanka.[3]

In the mid-1980s, he became embroiled in significant controversy over his writings followed by accusations of chauvinism and xenophobia when the public learned, through samizdat, about the correspondence between the literary historian Natan Eidelman and Astafyev that had been provoked by alleged racist overtones in Astafyev's work Sad Detective and his The Catching of Gudgeons in Georgia (both 1986), which rudely ridiculed Georgians.[8][9] At the 8th USSR Writers Union Congress in the summer of 1986, Georgian delegates urged the author to apologize publicly for his insult to the Georgian nation; when he refused, they walked out in protest.[10] In October 1993, he signed the Letter of Forty-Two.[11]

In 1999, his novel Jolly Soldier, which portrayed the horrors of the Soviet Army was met with extremely adverse reaction, which may have brought about a heart failure.[12]

In the years when many Soviet war literature authors (like Fyodor Parfyonov or Ivan Stadnyuk) were singing paeans to an idealized, invincible Soviet war hero, crashing the enemy under the Communist Party leadership, Viktor Astafyev became one of the first to rebel against the officially-approved convention and reveal the darker, unglamorous side of what was happening in 1941–1945.[13] He is credited with being one of the major proponents (alongside Viktor Nekrasov, Vasyl Bykov, Vladimir Bogomolov, Konstantin Vorobyov) of the so-called The Truth from the Trenches (okopnaya pravda) movement (the term was used originally in a derogatory sense by detractors who argued that formers soldier could not be trusted to write about the Great war objectively, being ignorant of its greater 'truths') which brought authenticity and harsh realism to the Soviet war literature.[14][15]

David Gillespie summed up his career as follows:

Astafyev has always been a highly individual writer who conforms to no movements or stereotypes.... He has always remained true to himself, and has retained a certain hard-edged integrity. His novel Prokliaty i ubity [The Damned and the Dead] is a gritty, typically uncompromising picture of war, with many naturalistic descriptions in a style the author has developed since the cathartic Pechal'nyi detektiv. Astafyev remains very much a writer who refuses to be easily categorized: he is neither a Village Prose Writer, nor a writer of "war prose", nor a writer who explores the mistakes of the recent Soviet past. At the same time, he is all of these. Capable of surprising and even shocking his reader, Astafev maintains a deep lyrical sense that has produced what Eidel'man called "the best descriptions of nature for decades". More than any other writer living in Russia today (with the possible exception of Solzhenitsyn), he is a writer who examines man as subjected to and moulded by the total Soviet experience.[16] 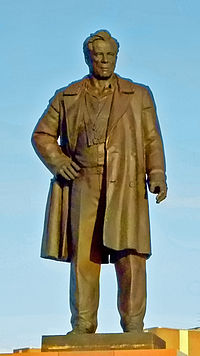 Monument to Astafyev in Krasnoyarsk

Krasnoyarsk State Pedagogical University is named in his honour.