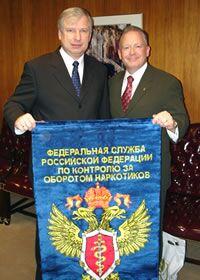 He graduated from the Law Department of Leningrad State University in 1973. In 1975–1991 he worked in Leningrad and Leningrad Oblast Directorate of KGB and prosecuted political dissidents, including members of Democratic Union.[1]

From August 1998, to May 2000, he was a First Deputy Director of FSB under Vladimir Putin and Nikolay Patrushev. From May 18, 2000, to March 11, 2003, he was President Vladimir Putin's plenipotentiary envoy to the Northwestern Federal District.

He has been married twice. Currently his wife is Natalya Chaplina, Director General of Rosbalt information agency and former Editor-in-Chief of the Sankt Peterburgskiy Chas Pik newspaper.

In early October 2007 several senior officers of the Federal Drug Control Service were arrested by agents of the Federal Security Service, which was considered by analysts as part of a longtime battle between Viktor Cherkesov, Igor Sechin and other members of Vladimir Putin's inner circle.[2]

On October 9, 2007, an article signed by Cherkesov was published in Kommersant, where it was claimed that the Russian Drug Enforcement Administration officials detained on criminal charges earlier that month are the exception rather than the rule, that the turf battle among the secret services could undermine the nation's stability, and that the only scenario for Russia that is both realistic enough and relatively favorable is to continue evolution into a corporativist state ruled by security services officials.[3]

On October 27, 2007, two officers of Russian Drug Enforcement Administration were poisoned to death, which was a part of the power struggle between the clans of Russian siloviks, according to Vladimir Pribylovsky.[4] "The entire political system of Russia today is a struggle of various clans and groups fighting to see that Putin stays in power according to their scenario and not according to the scenario of their competitors," said economist Mikhail Delyagin.[4]

On May 12, 2008, he was sacked by President Dmitry Medvedev as Head of the State Committee for the Control of the Circulation of Narcotic and Psychotropic Substances and appointed by Prime-Minister Vladimir Putin Head of the Federal Agency for the Procurement of Military and Special Equipment.[5][6]